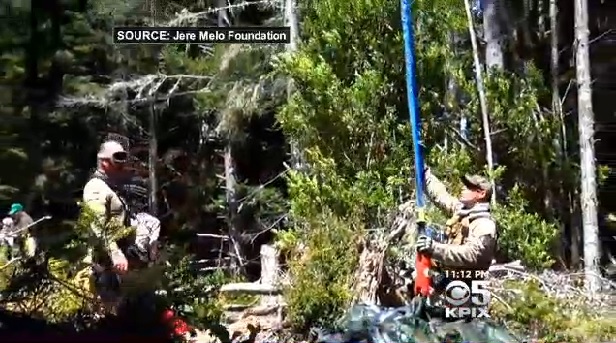 There are very few news stories about government overreach that shock me these days, but this week there were two — both in California. Each came and went with barely a whisper in the media, even from the “liberty” news.

Perhaps we’re so bombarded with mafia tactics by the government that some events just get lost in the chaos. And no, one of these developments is NOT the Los Angeles School District acquiring tanks and grenade launchers, although that’s probably of equal significance. Below is the first of these local stories. The second will be in a follow-up article.

This is probably the scariest development in law enforcement, ever, and I don’t say that lightly. If you thought no-knock SWAT raids to serve warrants for non-violent crimes was the epitome of tyranny, wait until you get a load of private mercenaries conducting special forces-type raids on American citizens.

That’s right, a report out of Mendocino, California admits that Blackwater-like private “security” contractors are now being used to “police pot.” Mysterious soldiers repelled out of unmarked helicopters fully armed for war to raid legal medical cannabis gardens last month. They didn’t identify themselves or present paperwork of any kind. They just destroyed the garden and left. Other witnesses claim this invading army is also “confiscating” product.

This is the ultimate “feeler” story in the unfolding Totalitarian Tip-Toe if I’ve ever seen one. A quirky local story of “mystery men” used to raise the public threshold of acceptable tyranny, a.k.a. legitimizing private-sector soldiers for law enforcement.

The war machine seems to be gauging how much terror they can inflict on peaceful Americans before they say WTF (See Ferguson) and, perhaps more importantly, to see if the public will allow this vast new market for war profiteers.

It should be a massive media story “private war profiteering at home to terrorize citizens fight crime”. Helicopters, weapons of war, and tactical gear are expensive. Who’s seeding these start-ups anyway?

The manipulation continued a day after this story was reported, when Alex Altman of TIME wrote “Californians Turn to Private Security to Police Pot Country” as if all the citizens of California have agreed to this type of policing. Subtle manipulation.

Over the summer, residents claimed men in military gear had been dropping onto private property from unmarked helicopters and cutting down the medicinal pot gardens of local residents. Local law enforcement have conducted helicopter raids in the area, but some worried the culprit this time was different: a private-security firm called Lear Asset Management.

The confusion was easy to understand. In the wildlands of California’s pot country, the workings of law enforcement are hard to track, and the rules for growing pot are often contradictory. To add to the mess, the various local, county, state and federal enforcement efforts don’t always communicate with each other about their efforts. The added possibility of private mercenaries, with faceless employers, fast-roping from helicopters raised alarm bells for many farmers.

TIME legitimizes Lear Asset Management and the practice of private policing with a matter-of-fact job description:

They are hired by large land owners to do the work of clearing trespass gardens from private property, and perform forest reclamation, sometimes funded by government grant. Deep in the woods, they cut down illegal pot plants and scrub the environmental footprint produced by the backwoods drug trade. They carry AR-15 rifles, lest they meet armed watchmen bent on defending their plots.

I really don’t have a problem with securing private property from vandals, but did you catch that slip “sometimes funded by government grant”?  That’s when “private security” becomes “law enforcement.” This is the RED ALERT buried in this story. At best our tax dollars are being used to fund private armies for large land owners. At worst, when will we see these warriors policing BLM land (aka National Parks)? Wait for it…

Altman quotes official statistics about how successful Lear and law enforcement are in raiding marijuana farmers, measured in the “street value” of the forbidden crop seized at gunpoint, as if that is still acceptable behavior by society’s peace keepers in the era of legal weed. But Altman just uses it as a segue into a broader “problem” of policing environmental vandalism on large stretches of open land, including “public” land.

More recently, the trespass grow sites have migrated from public land onto the vast plots owned by private citizens and timber companies. Some of them have hired Lear to deal with the problem. The company has run about nine missions across California’s pot country this year, with more planned this fall, Trouette says. And while the company’s special-ops aspect gets much of the attention, most of the work focuses on environmental reclamation.

The public is supposed to believe Lear is merely an environmental clean-up team doing community service who just so happens to have military special ops capability. How quaint. I didn’t know litter maintenance required AR-15s. But who would be opposed protecting the environment? Smart marketing.

TIME goes for the hard close to sell this tyranny by providing legal cover for these raids without warrants, before ending the article as a sponsored post for “regulation” of Lear’s “flourishing” domestic mercenary business as the “best thing for locals.”

Reports of vigilante marijuana raids on private property may simply stem from a lack of legal clarity. Under the so-called “open fields doctrine” set forth by the U.S. Supreme Court, the Fourth Amendment does not protect undeveloped property from warrantless searches. As a result, police may be permitted to cut down private gardens without a warrant. (my emphasis because your need to read and reread every word)

In the meantime, Lear has flourished, despite the concern among some local growers. But like most people in the Emerald Triangle, Trouette thinks thebest thing for the locals would be for the feds to sort out all the confusion. “I think the federal government would do everybody a big favor,” he says, “by regulating this industry.” (my emphasis)

So let me get this straight: a criminal gang of armed thugs commits violence and theft, and the best way to solve that problem is to legalize and regulate those thugs? Sounds like ISIS.

The creepiest thing about this development is that it’s a clever, more professional repackaging of a previous attempt to introduce private police in America. Some of you liberty lovers may recall it being rolled out once before in an eerily similar manner.

Hiring a private firm for domestic policing caused massive outrage not just locally in Montana but also around the United States. APF is now referred to as a well-funded fraud perpetuated by a petty con man and the event was swiftly dumped into the dustbin of history.

The Wikipedia entry on APF states:

American Police Force (APF), and under its revised name American Private Police Force, was a fraudulent entity claiming to be a private military company. It never possessed any legitimacy to operate in the United States. The company’s previous logo was an exact copy of the Serbian state coat of arms which caused some controversy and resulted in the Serbian government threatening legal action against APF if it did not remove or change the logo.

In September 2009, US government contract databases showed no record of the company, while security industry representatives and federal officials said they had never heard of it.

APF was registered as a corporation in California by convicted con man Michael Hilton on 2 March 2009.

Interestingly, there are absolutely no follow-up reports of “Michael Hilton” or anyone else being prosecuted or convicted in the APF case. They simply vanished. Think about that for a moment. A heavily-armed foreign force invades a small town in America on false pretenses committing dangerous fraud and the U.S. government does absolutely nothing about it. What does that tell you?

Now with a more polished version of private security, minus the flashy Mercedes and foreign accents, and sold to us as environmental guardians, this story has gone largely unnoticed. Yet, if these raid allegations are true, Lear’s actions already far exceed anything APF did in Montana.

Stay tuned for my next article on the second unreported tyrannical event that happened in California this past week to be released later today or early tomorrow.