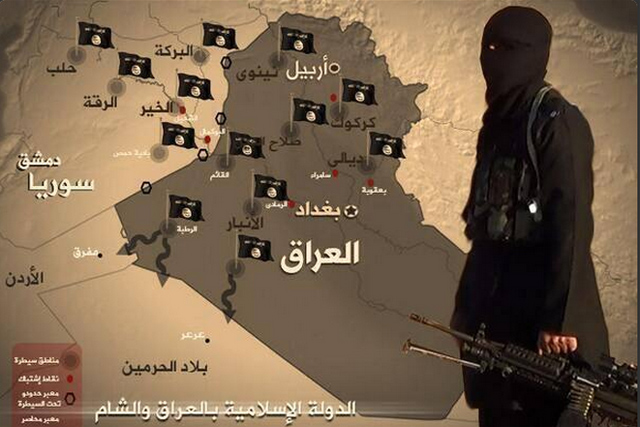 With a rash of “beheadings” sweeping the world, a horrified public is asked to see this depraved barbarity as The New Normal.

First we had the August “murder” on video of U.S. journalist James Foley, shown kneeling before a black-robed, masked figure brandishing a knife. Yes, even a rather small knife can do it (just as box-cutters can enable the hijacking of commercial airplanes). The perpetrator is identified as a member of the terrorist group ISIS (or IS or ISIL), which supposedly wants to install a new Islamic caliphate based in the region.

However, the video did not actually show the beheading, but faded to black at the appropriate moment. A subsequent frame purports to show Foley’s head propped up on his headless body. This video was staged, however, as proved by numerous researchers, and even admitted in the British press.[1] According to a report in The Telegraph:

…a study of the four-minute 40-second clip, carried out by an international forensic science company which has worked for police forces across Britain, suggested camera trickery and slick post-production techniques appear to have been used…no blood can be seen, even though the knife is drawn across the neck area at least six times.[2]

Nonetheless, the U.S. media continue to report this “beheading” as a real occurrence, over and over again, followed by another “beheading” of an American journalist, Steven J. Sotloff, in a video released in early September. This was supposedly a “second message to America” from ISIS: “Just as your missiles continue to strike our people, our knife will continue to strike the necks of your people.”[3] This video too is problematic, with no blood in evidence before the scene fades to black.[4]

Both Foley and Sotloff have intelligence connections, as does SITE, the media dissemination service behind the release of the videos. SITE [Search for International Terrorist Entities] is an offshoot of Intel Center, both of which have an uncanny ability to produce such material at the most opportune times in support of U.S. foreign policy.[5] A visit to the SITE website is instructive.[6]

The SITE Intelligence Group, founded in 2001 by Rita Katz, is an intelligence gathering operation that monitors jihadists online, often finding terrorist statements and videos as uploads “before they are published,” according to Katz. These are transmitted to U.S. intelligence services, which are curiously beholden to SITE for these sensitive materials, and they are then released to the U.S. media.[7]

All such information obtained by SITE and then broadcast is therefore suspect. Nonetheless, the Foley and Sotloff videos have reportedly gotten the U.S. public on board with the bombing of northern Iraq and Syria in an R-2-P operation (Responsibility To Protect), the real goal being to take out Bashar al-Assad in Syria.

As for the U.K., David Haines was shown in a third “beheading” video released by SITE in mid-September.[8] And the black-robed “killer” has a British accent, which surely indicates that British citizens have gone to Iraq-Syria to join ISIS – and that they could return to wreak havoc in the homeland.

Not to neglect France, which now has its own beheading – of Hervé Gourdel, a mountaineering guide from Nice who was kidnapped in Algeria, shown in a video released by SITE in late September.[9] And certainly Australia should have one as well, but a dastardly ISIS plot in Sydney was reportedly thwarted by the government.[10]

These western countries are instrumental to the U.S.-led coalition to protect the world against ISIS, since the coalition initially included only Middle Eastern client states such as Saudi Arabia, Qatar, Bahrain, United Arab Emirates, and Jordan. As of this writing, France, Australia, Belgium, Denmark, and England have now signed on, with Turkey lining up as well.[11]

Just to drive the point home (as it were) for any “war weary” Americans out there, we now have a home-grown beheading of an employee at

a food processing plant in Moore, Oklahoma. The perpetrator, a black man named Alton Nolen, is said to have been fired from his job at Vaughan Foods. Nolen “recently started trying to convert some of his co-workers to the Muslim religion,” according to a police spokesperson.[12]

On “a Facebook page that appears to be his,” Nolen posted the following: “This is the last days… AMERICA AND ISRAEL ARE WICKED. WAKE UP MUSLIMS!!!” The FBI is assisting with the investigation after putting out “an alert to local law enforcement officials across the country to be on the watch for so-called lone wolves who might respond violently” in the wake of U.S. bombing in Syria. Now ask yourself: is this scenario credible?[13]

Nonetheless, the “beheadings”are getting major traction in the U.S. press. Magazines feature articles and editorials, television anchors report with great gravity, and radio hosts banter with listeners about these fake events. WAKE UP AMERICANS!!! As this war propaganda multiplies, with gullible members of the public accepting these psy-ops as fact, at stake are the destruction of the Middle East, continued massive “collateral damage” in Iraq and Syria – and the degrading of our own collective mentality.[14]

Vivian Lee PhD, is a professor at an East Coast university.