How To Communicate If The Government Obliterates The Internet 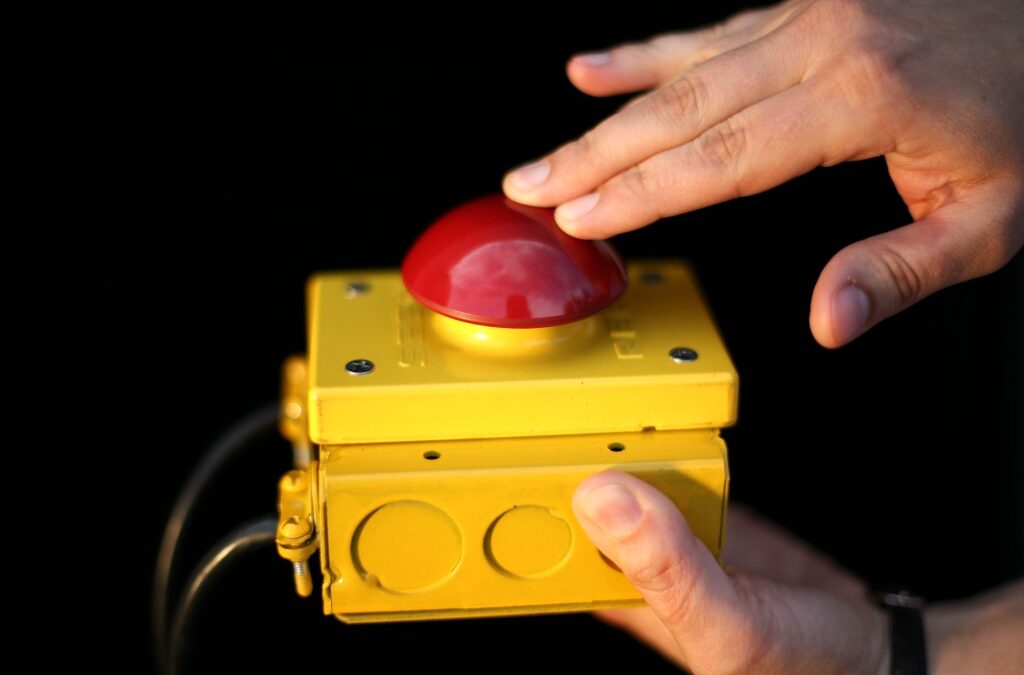 First of all, download or print these instructions. Keep them with your survival gear, if you have prepared one.

Your government is displeased with the communication going on in your location and pulls the plug on your internet access, most likely by telling the major ISPs to turn off service.

This is what happened in Egypt Jan. 25, 2012 prompted by citizen protests, with sources estimating that the Egyptian government cut off approximately 88 percent of the country’s internet access. What do you do without internet? Step 1: Stop crying in the corner. Then start taking steps to reconnect with your network. Here’s a list of things you can do to keep the communication flowing.

Print out your contact list, so your phone numbers aren’t stuck in the cloud. Some mail services like Gmail allow you to export your online contact list in formats that are more conducive to paper, such as CSV or Vcard, and offer step-by-step guides on how to do this.

BROADCAST ON THE RADIO

CB Radio:Short for “Citizens Band” radio, these two-way radios allow communication over short distances on 40 channels. You can pick one up for about $20 to $50 at Radio Shack, and no license is required to operate it.

Ham radio:To converse over these radios, also known as “amateur radios,” you have to obtain an operator’s license from the FCC. Luckily, other Wired How-To contributors have already explained exactly what you need to do to get one and use it like a pro. However, if the President declares a State of Emergency, use of the radio could be extremely restricted or prohibited.

GMRS:The General Mobile Radio Service (GMRS) is a licensed land-mobile FM UHF radio service in the United States available for short-distance two-way communication. It is intended for use by an adult individual who possesses a valid GMRS license, as well as his or her immediate family members… They are more expensive than the walkie-talkies typically found in discount electronics stores, but are higher quality.

Family Radio Service:The Family Radio Service (FRS) is an improved walkie-talkie radio system authorized in the United States since 1996. This personal radio service uses channelized frequencies in the ultra high frequency (UHF) band. It does not suffer the interference effects found on citizens’ band (CB) at 27 MHz, or the 49 MHz band also used by cordless phones, toys, and baby monitors.

Micro-broadcasting:Micro-broadcasting is the process of broadcasting a message to a relatively small audience. This is not to be confused with low-power broadcasting. In radio terms, it is the use of low-power transmitters to broadcast a radio signal over the space of a neighborhood or small town. Similarly to pirate radio, micro-broadcasters generally operate without a license from the local regulation body, but sacrifice range in favor of using legal power limits.

Packet Radio Back to the ’90s: There do exist shortwave packet-radio modems. These are also excruciatingly slow, but may get your e-mail out. Like ham radio above it requires a ham radio license because they operate on ham radio frequencies.

Set up a phone tree:According to the American Association of University Women, a phone tree is “a prearranged, pyramid-shaped system for activating a group of people by telephone” that can “spread a brief message quickly and efficiently to a large number of people.” Dig out that contact list you printed out to spread the message down your pyramid of contacts.

Enable Twitter via SMS:Though the thought of unleashing the Twitter fire hose in your text message inbox may seem horrifying, it would be better than not being able to connect to the outside world at all. The Twitter website has full instructions on how to redirect tweets to your phone.

Call to Tweet: A small team of engineers from Twitter, Google and SayNow, a company Google acquired recently, made this idea a reality. It’s already live and anyone can tweet by simply leaving a voicemail on one of these international phone numbers (+16504194196 or +390662207294 or +97316199855) and the service will instantly tweet the message using the hashtag #egypt. No Internet connection is required. People can listen to the messages by dialing the same phone numbers or going to the Twitter account, speak2tweet.

If you need to quickly send and receive documents with lengthy or complex instructions, phone conversations may result in misunderstandings, and delivering the doc by foot would take forever. Brush the dust off that bulky old machine, establish a connection by phone first with the recipient to make sure his machine is hooked up, then fax away.

You may not need a fax machine to send or receive faxes if your computer has a dial-up fax application.

Sometimes we get so wrapped up in the virtual world that we forget about resources available in the real world. Physical bulletin boards have been used for centuries to disseminate information and don’t require electricity to function. If you are fortunate enough to be getting information from some other source why not share it with your friends and neighbors with your own bulletin board? Cork, magnetic and marker bulletin boards are as close as your nearest dime store and can be mounted just about anywhere. And if push comes to shove you can easily make your own with scrap wood lying around the house.

Getting back online – While it might be relatively easy for a government to cut connections by leveraging the major ISPs, there are some places they wouldn’t get to so readily, like privately-owned networks and independent ISPs.

In densely populated areas, especially in central business districts and city suburbs there are multiple home WiFi networks overlapping each other, some secure, some not. If there is no internet, open up your WiFi by removing password protection: If enough people do this it’s feasible to create a totally private WiFi service outside government control covering the CBD, and you can use applications that run Bonjour (iChat on Mac for example) to communicate with others on the open network and send and receive documents. **needs more clarification

If you are a private ISP, it’s your time to shine. Consider allowing open access to your Wi-Fi routers to facilitate communication of people around you until the grid is back online.

According to an article in the BBC about old tech’s role in the Egyptian protests, “Dial-up modems are one of the most popular routes for Egyptians to get back online. Long lists of international numbers that connect to dial-up modems are circulating in Egypt thanks to net activists We Re-Build, Telecomix and others.”

Dial-up can be slow. Often, there is a lightweight mobile version of a site that you can load from your desktop browser quickly despite the limitations of dial-up. Examples: mobile.twitter.com, m.facebook.com, m.gmail.com.

Most wireless routers, PCs, laptops, and even some ultramobile devices like cellphones have the ability to become part of an “ad hoc” network, where different “nodes” (all of the devices on the network) share the responsibility of transmitting data with one another. These networks can become quite large, and are often very easy to set up. If used properly by a tech-savvy person, such networks can be used to host temporary websites and chat rooms. There are many internet tutorials on the internet for ad hoc networking, so feel free to Google some.

Apple computers tend to have very accessible ad hoc functionality built in, including a pre-installed chat client (iChat) that will automatically set up an ad hoc “Rendezvous” chatroom among anybody on the network, without the need for an external service like AIM or Skype. Ad hoc network-hosting functionality is built in to the Wi-Fi menu.

Windows computers have several third-party ad hoc chat applications available (such as Trillian) and setting up an ad hoc Wi-Fi network is almost as simple as on a Mac.

Linux operating systems, of course, have plenty of third-party apps available, and most distros have ad hoc network-creation support built in.

Using popular wireless access point devices like a Linksys WRT54G, you can create a huge wireless bridged network — effectively creating a Local Area Network (LAN), or a private Internet that can be utilized by all users within range using a Wi-Fi enabled device.

You can also link multiple devices together wirelessly, extending the range of your network. Most access points will cover a 100 meter area and if your wireless device is built to support the 802.11n wireless standard, you will get almost a 500 meter coverage area for each access point.

To build a wireless bridge, check out the dd-wrt wiki, and learn how to configure Linksys WRT54G as a wireless client using this Anandtech thread.

A used DS family device can be purchased inexpensively. In addition to wi-fi, the DS supports its own wireless protocols. Using Pictochat, it is possible to chat with nearby DS users without having any DS games. Unfortunately, the range is quite short.

Some games, such as the fourth generation Pokemon games, support mail items. Thus you can send your message under the guise of just playing a game. Mail items can be sent through the Internet if you can get on the net and you and your partner(s) have each other’s friend codes.

The original DS and the DS Lite do support the Opera web browser, but finding the game card and memory pack may be very difficult. Starting with the DSi, Opera is downloadable.

Your computer has the ability to set up your own INTRANET. This was done BEFORE the internet was popularized in two ways: Your computer dialed up other computers and sent them the contents of a message board, or local people people dialed into your computer. A nationwide system can be set up this way with a central location sending to many cities then each city sending out the info locally.

If you’re going to post government secrets on your work-around site, you may want to set up an untraceable account. Really, you only need a mail drop, an assumed name, a prepaid credit card you can get at many stores to set up service.

You can have very, very slow internet if you have something similar to an Iridium phone, which would allow you to do dial up at 2400 baud, which at least gives you e-mail. This will also work when your government has shut down GSM and telephone access, and will work pretty much anywhere on the planet. If you’re in the right place, get yourself KA-SAT access which is satellite broadband and will not be routed through any internet exchange that certain local governments may monitor or block (unless that government is part of EU or er … Uncle Sam.

Make some noise: Have an air horn or other loud instrument handy. It may just come down to being able to alert people in your local geographic area, who would otherwise be unaware of an emergency. You may also want to learn a bit about Morse code and have a cheat sheet available.