Large Hadron Collider is ‘being sabotaged from the future’ 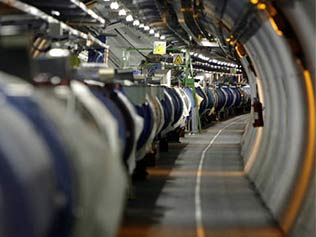 SCIENTISTS claim the giant atom-smashing Large Hadron Collider (LHC) is being jinxed from the future to save the world.

n a bizarre sci-fi theory, Danish physicist Dr Holger Bech Nielsen and Dr Masao Ninomiya from Japan claim the LHC startup has been delayed due to nature trying to prevent it from finding the elusive Higgs boson, or “God particle”.

They say their maths proves that nature will “ripple backward through time” to stop the LHC before it can create the God particle, like a time traveller who goes back in time to kill his grandfather.

“One could even almost say that we have a model for God,” Dr Nielsen says in an unpublished essay.

“He rather hates Higgs particles, and attempts to avoid them.”

“In the case of the Higgs and the collider, it is as if something is going back in time to keep the universe from being hit by a bus.”

“It must be our prediction that all Higgs producing machines shall have bad luck,” Dr Nielsen told the New York Times.

European science agency CERN designed the world’s biggest particle accelerator to shoot beams around a freezing 27km concrete ring underground near Geneva, smashing atoms together in search of the elusive “God particle” which is believed to have been present at the Big Bang.

The multi-billion-dollar machine, built over almost 20 years, was set to launch in late 2008 but broke down after it overheated during a test run.

The relaunch was pushed back to late 2009 as more parts had to be replaced, and CERN was recently scandalised when a LHC scientist was found to have approached al-Qaeda for work.

The LHC – which features in sci-fi plots such as Dan Brown’s Angels and Demons and the new TV show FlashForward – has been dubbed a “doomsday device” with claims it will open black holes.

“Anyone who thinks the LHC will destroy the world is a tw–,” he said.

The LHC is set to start up again next month.