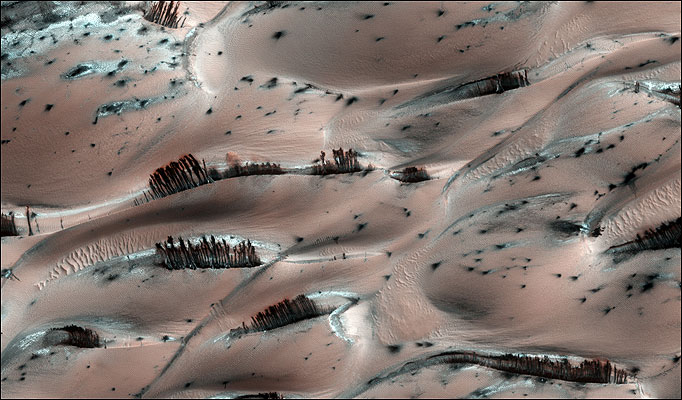 A MARS probe has stunned NASA scientists by sending home pictures of what look like TREES.

Rows of dark “conifers” appear to sprout from alien hills on the Red Planet.

But the scene is actually a remarkable optical illusion.

For the view is of sand dunes coated with a thin layer of frozen carbon dioxide — or dry ice — less than 240 miles from the planet’s north pole.The “trees” are really trails of debris caused by landslides as ice melts in Mars’s spring.

You can even see a cloud of dust, just to the left of centre of the picture, where an avalanche is caught happening.

The photo was taken from orbit around Mars by HiRISE, the most powerful camera sent to another planet.

NASA’s Candy Hansen said: “The streaks are sand, dislodged as ice evaporates, which slide down the dune.

At this time of the martian year the whole scene is covered by CO2 frost.”

Stanley A. Fulham predicted the New York UFO Fleet Sighting october 13, 2010, in his book “Challenges of Change” from 2004…