Stanley A. Fulham predicted the New York UFO Fleet Sighting october 13, 2010, in his book “Challenges of Change” from 2004… 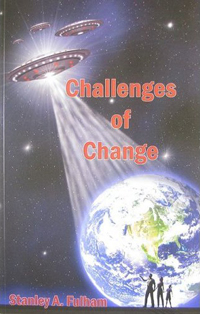 Stanley A. Fulham (or Stan Fulham)

The New York UFO Fleet Sighting over Manhattan october 13, 2010, were no surprise to retired NORAD officer Stanley A. Fulham (also known as Stan Fulham). He is the author of the book Challenges of Change

re-published back in January 2008 (originally published 2004). In this book, he comes with the prediction, that October 13th, 2010 will be the tentative date for a fleet of extraterrestrial vehicles, to hover over the world’s principal cities. You don´t believe me? Well, see this video interview by Randy Kitchur with retired NORAD officer Stanley A. Fulham on Youtube uploaded back in Juny 26, 2010 or go buy the book…

Mr. Fulham served in the airforce under World War 2 in a bomber command. He was shot down over Germany and spend most of the war in german prisoncamps. In 1944, in a german prisoncamp, he saw his first UFO and was also told about the “foo fighters”, a known UFO phenomenon today. After the war he spend some years away from the air force, but returned to the flightcontrol in NORAD (North American Aerospace Defense Command).

As a flightcontroller in NORAD, he witnessed two UFO´s or alien spacecrafts, two to three times the size of an aircraft visible on radar. He scrambled fighters against the two objects that just “stood there” 1000 feet up 2 miles away. Then the jetfigters approached them, they streaked away several miles out, where they stopped and stood still again. The jetfigters approached them a second time, and they then disappeared out over the pacific. Next morning, the base commander called him and said, they were getting calls from the medias about these “strange lights” and as you know, there was nothing unusual happen last night, so “there are no reason for us to be speaking to the media”. That was the policy at that time under an agreement signed between United States and Canada in 1956, which was to control the dissimination of information relating to UFO´s.

Mr. Fulham, a squadron commander and a technical officer met with NORAD officers and discussed this incident. At this meeting, he met a NORAD officer he became lifelong friend with, and this officer told him about UFO/Alien-related stuff that was never made public. Mr. Fulham retired but keept the interest for the UFO phenomenon and he wanted answers. In his seeking after the truth, he comes across the Akashic Records

Mr. Fulham was aware, that he had to find his answers via the fourth dimension. As you see, the alien spacecrafts don´t conform to third dimension laws and has it´s origins elsewhere. So he learns about the Akashic Records (“akasha” is a Sanskrit word and means “sky”, “space” or “aether”) and how these contains all information, energy, thoughts, words and actions that is done in the universe, and that a “transcended spiritual group” (the transcenders), which consists of 43.000 very old ancient souls, have direct access to these records. These spiritual entities blended all their experience and knowledge to provide advise and information to other souls existing in the universe, but they cannot communicate into the third dimension, because they communicate by thoughts. That´s here channelers like Rik Thurston, who has worldwide reputation as “non-conscious” trance channeler, comes into sight. Rik Thurston was the medium through which Stan got all the information about a worldwide UFO display on october 13, 2010…

The transcenders has told, that we are in a time now, symbolic described as the
Four Horsemen of Apocalypse

According to the transcenders, mankind will survive earth changes, terrorism/war and the financial collapse, but not the pollution of our atmosphere with carbon-dioxide. They explain, that the aliens intend to help us and will intervene the next comming years to fix our atmosphere. But they are aware, that the sudden interaction with mankind, can cause a great deal of fear and panic, so the aliens will reveal them selfes in a massive UFO display over our principal cities, as the first step. They won´t land October 13, 2010…

(…the catastrophic pollution with Carbon-Dioxide (CO2) sounds a bit harsh to me, still with ClimateGate in the back of my mind, but if you listen to what Mr. Fulham says, they´re not mention the heating of our atmosphere with CO2, but that the air will be hazardous to us at a certain level – the air will simply be poisonous to us…)

(…we have brothers and sisters in space, that´s for sure, so let´s welcome them to our planet and be kind to them. What great opportunities mankind can get if the aliens choose to land and help us is unimaginable – clean and free sustainable energy is number one on my wishlist… Well, both feets to the ground again, we don´t know nothing yet, but have had signs in the sky for decades now. Who they really are is a big question, but I think the aliens referred to by the transcenders are humanoid, because they wouldn´t cause fear and panic, so a humanoid presentation instead of the greys, as the first pierhead to humanity, would make great sense…)

Back to mr. Fulham, he made the prediction in his book, based on information retrieved through the medium Rik Thurston, that this massive UFO display would happen on october 13, 2010, and he gave this prediction again in an interview with Randy Kitchur, uploaded to Youtube 26. Juni 2010). It is a first step in our future relationship with the aliens he says, and then our world will have changed forever…

Other sources about Stan Fulham

…A newly-published book by a retired NORAD officer predicts October 13, 2010 as the tentative date for a fleet of extraterrestrial vehicles to hover for hours over the earth’s principal cities. Author says the event to be the first in a series intended to avert a planetary catastrophe resulting from increasing levels of carbon-dioxide in the earth’s atmosphere dangerously approaching a “critical mass”…
Link: Retired NORAD Officer’s New Book Predicts a Tentative Worldwide UFO Display on October 13, 2010

Examiner.com October 9, 2010
…October 13, 2010, is the disclosure date where mankind will have no doubt that aliens are among us, according to a book by a former NORAD officer.…