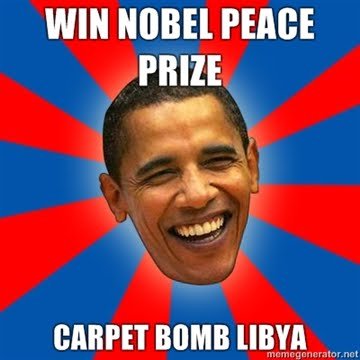 … THE ROTHSCHILDS OWN YOU NOW

The David Icke Newsletter Goes Out On Sunday

Gaddafi was being demonised by the Reagan-Father Bush administration (the Rothschilds) in the 1980s when the CIA and Mossad led a campaign to destabilise Libya that mirrors what has happened in 2011. Newsweek reported on August 3rd, 1981:

‘The details of the plan were sketchy, but it seemed to be a classic CIA destabilization campaign. One element was a “disinformation” program designed to embarrass Kaddafi and his government. Another was the creation of a “counter government” to challenge his claim to national leadership. A third — potentially the most risky — was an escalating paramilitary campaign, probably by disaffected Libyan nationals, to blow up bridges, conduct small-scale guerrilla operations and demonstrate that Kaddafi was opposed by an indigenous political force.’

Sound familiar? That was 30 years ago.

But so many just buy the lie no matter what the era or generation. As Adolf Hitler said: ‘Make the lie big, make it simple, keep saying it, and eventually they will believe it.’ And his propaganda chief, Joseph Goebbels, said: ‘The most brilliant propagandist technique will yield no success unless one fundamental principle is borne in mind constantly – it must confine itself to a few points and repeat them over and over. Hitler also said, with equal relevance: ‘What luck for the rulers that men do not think.’

NATO planes pepper-bombed Tripoli in support of the ‘rebels’ on the ground. Thousands of the very civilians that the UN resolution said should be protected were killed in the process. But we hear nothing of this in the mainstream media and precious little of the murder and executions of Gaddafi supporters by the ‘rebels’ throughout the conflict and after they entered Tripoli.

The emphasis is always on alleged executions and killings of rebel supporters by Gaddafi’s forces. No doubt some of these claims are true, but where is the balance? There is none, and Syria is now being demonised to go through the same process of demonise, invade, conquer, control. Richard Haas, president of the Illuminati Council on Foreign Relations which directs US foreign policy, has admitted that the NATO bombing of Libya was not about protecting civilians, but removing Gaddafi. He also called for an ‘international force’ to occupy the country and ‘maintain order’.

It is the same rhetoric, the same blueprint, which we have seen in every other country ‘liberated’ by the architects of tyranny. It really is goodbye Libya: rest in peace. The United States and its conscripted NATO allies are not going to walk away and leave Libya to the Libyans. It is an occupation force to pillage the oil resources and the banking system, and it was always going to be.

TO SUBSCRIBE TO THE DAVID ICKE NEWSLETTER, GET IMMEDIATE ACCESS TO HIS FANTASTIC NEWSLETTER LIBRARY ON A HOST OF SUBJECTS GOING BACK TO 2005, AND SEE HOURS OF VIDEO FOOTAGE OF DAVID’S