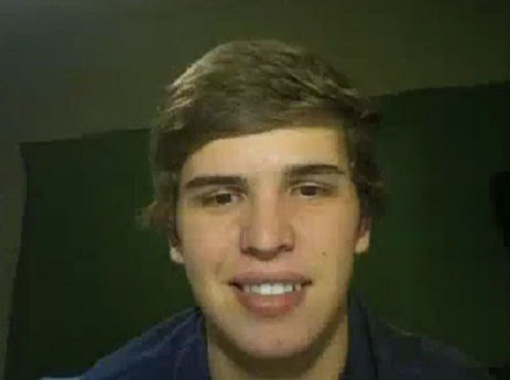 CHICAGO — A week before Ben Breedlove died of a heart attack, the Texas teenager posted a remarkable video describing the peace and bright lights he’d found the other times his heart stopped.

Breedlove, 18, tells his story with simple note cards and the occasional smile, sitting close to the camera and stepping back just once to show the scar from when a pacemaker was implanted to help his troubled heart.

It is a remarkably hopeful video, though Breedlove also describes the fear he lived with after being born with a serious heart condition and disappointment that he could not play sports and “be the same as everyone else.”

“The first time I cheated death was when I was 4,” one of the cards said.

Breedlove had a seizure and as nurses rushed him down a hospital hallway, he told his mother of the bright light overhead.

She said she couldn’t see anything, but he felt his fear and worries washed away and couldn’t help smiling.

“I can’t even describe the peace, how peaceful it was,” he wrote. “I will NEVER forget that feeling or that day.”

Breedlove nearly died again a few months ago when his heart stopped during a routine surgery to remove his tonsils.

“It was a miracle that they brought me back,” he wrote. “I was scared to die but am SO glad I didn’t.”

Breedlove’s heart stopped again on December 6. He was at his Austin high school and sat down on a bench after feeling like he was going to faint.

He passed out and when he woke up, he couldn’t talk or move. He could only watch and listen as paramedics put shock pads on his chest.

He heard them say that his heart had stopped and that he had no pulse, which he explains by the fact that “when people’s bodies ‘die’ the brain still works for a short time.”

“I really thought to myself, this is it, I’m dying,” he wrote.

“The next thing that happened I’m not sure if it was a dream or vision. But while I was still unconscious I was in this white room. No walls, it just went on and on…”

He found himself standing with his favorite rapper, Kid Cudi, and they were both dressed in really nice suits.

“Why he was the only one there with me, I’m still trying to figure out,” Breedlove wrote.

“I had that same feeling, I couldn’t stop smiling. I then looked at myself in the mirror and I was proud of MYSELF. Of my entire life, everything I have done. IT WAS THE BEST feeling.”

Kid Cudi put his hand on his shoulder and then Breedlove’s favorite song came on, the part where Cudi raps “when will this fantasy end… when will the heaven begin?”

Cudi told him “Go now” and Breedlove woke up.

After viewing the video, the rapper said he broke down in tears watching it.

“This has really touched my heart in a way I cant describe, this is why I do what I do. Why I write my life, and why I love you all so much,” Kid Cudi wrote on his blog.

“I know Ben is at Peace, and I hope he gets a chance to sit and talk with my Dad.”

Breedlove ended his video with four final cards: “I didn’t want to leave that place. I wish I NEVER woke up. Do you believe in angels or God? I Do.”

Breedlove died at Christmas and his family said in his death notice that it was a gift from God.

“We know the Lord used the amazing life of our precious son to reach a weary world on Christmas night, just as He did over 2000 years ago with his own Son,” they wrote, and urged people to find the video that Breedlove posted on YouTube on December 18.