LOBBYING: Closer to Bribery, or Extortion? 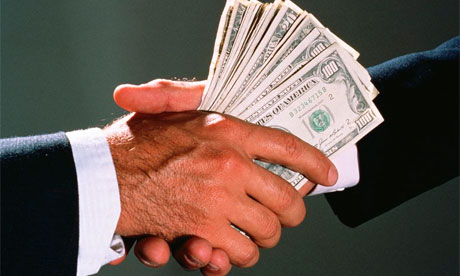 We’ve certainly talked quite a bit about the institutional-level corruption of the way Congress and lobbying works, but a recent This American Life episode, done in partnership with thePlanet Money team takes a much deeper dive into how lobbying works. You absolutely should listen to it. It’s really fascinating, even for folks who follow a lot of this stuff. There is also a full transcript, but hearing the whole thing is quite fascinating. Among the elements that are most interesting are the details of just how much time and effort goes into politicians raising money, and how the various fundraisers work.

But one thing that struck me in listening to it, was a comment made towards the end by (former) Senator Russ Feingold, who points out that while most people think of lobbying as bribery, they often have the picture backwards. It’s extortion:

I’ve had conversations with Democratic givers out here in the Bay Area and I’ll tell you, you wouldn’t believe the requests they’re getting. The opening ante is a million dollars. It’s not, gee, it’d be nice if you give a million. That’s sort of the baseline. This is unprecedented. And, in fact, one thing that John and I experienced was that sometimes the corporations that didn’t like the system would come to us and say, you know, you guys, it’s not legalized bribery, it’s legalized extortion. Because it’s not like the company CEO calls up to say, gee, I’d love to give you some money. It’s usually the other way around. The politician or their agent who’s got the Super PAC, they’re the ones that are calling up and asking for the money.

This is actually confirmed much earlier in the show, when former lobbyist Jimmy Williams explains that part of the job of the lobbyist is to avoid calls from politicians who are always asking for money:

Alex Blumberg: Oh, so you would dodge calls for fundraising?

Jimmy Williams: Oh yeah. Every lobbyist does. Are you kidding? You spend most of your time dodging phone calls. Oh yeah.

What’s equally stunning as you listen to it, is how much everyone seems to dislike the system. The politicians hate having to spend many hours each day fundraising (which they do from phone banks across the street from the Capitol, because they’re not allowed to do it from their offices). The lobbyists hate having to focus on raising money for the politicians. The donors hate getting the calls asking for more money. One politicians talks about how he burned out all his friends:

Walt Minnick: You essentially wear out your friends and you wear out the people who are your natural supporters, because if someone writes you one check or comes to a fundraiser, they get on a list. And three or four months later you call them back again. And the best thing about being an ex-congressman is my friends now return my phone calls.

The show concludes with a fascinating discussion between Senators John McCain and Russ Feingold, who famously passed campaign finance reform a decade or so ago, only to see most of what they worked for get tossed aside by the Supreme Court’s Citizens United case. McCain explains that the Supreme Court ruled the way it did because it simply has no idea how corrupt the political system is today:

John McCain: At first, I was outraged. The day that Russ and I went over and observed the arguments, the questions that were asked, the naivety of the questions that were asked and the arrogance of some of the questioners, it was just stunning. Particularly Scalia with his sarcasm. Why shouldn’t these people be able to engage in this process? Why do you want to restrict them from their rights of free speech? And the questions they asked showed they had not the slightest clue as to what a political campaign is all about and the role of money that it plays in political campaigns. And I remember when Russ and I walked out of there, I said, Russ, we’re going to lose and it’s because they are clueless. Remember that day we were over there, Russ?

Russ Feingold: Absolutely, John. I couldn’t agree with you more. It clearly was one of the worst decisions ever of the Supreme Court. The trouble with this issue– and I think John would agree with this– is people have gotten so down about it, they think it’s always been this way. Well, it’s never been this way, since 1907. It’s never been the case that when you buy toothpaste or detergent or a gallon of gas, that the next day that money can be used on a candidate that you don’t believe in. That’s brand new. That’s never happened since the Tillman act and the Taft Hartley Act. And so, people have to realize this is a whole new deal. It’s not business as usual.

So why doesn’t it get fixed? Well, because the people in power now know how to use the system to win, so they’re afraid to mess with it, and potentially lose their ability to use the system as it stands now to succeed.

Russ Feingold: We managed to get– against all odds, we did get people. It took a lot of hard work. Now the problem is, of course, is people are reticent to do that because they got elected under the system.

Russ Feingold: Sure. When you win a certain way, your people say to you, hey, this is how we do it and this is how we won. We better not mess with success. I think that’s one of the problems in this presidential race, where not only the Republicans, but even my candidate, President Obama, has opened the door to this unlimited money through some of his people. It’s hard to get people to change something after they win that way. And that’s one of my worries about it.

It really is worth listening to the whole thing if you want to understand the institutional, unavoidable level of corruption in DC — even if it’s not the way you may have suspected it worked. The folks at Planet Money have also done some follow up stories that are interesting, including a detailing of the most and least lucrative committee assignments. In the full episode, they explain that committee assignments are all a part of the corrupt process. If you get on a “good” committee (define by its ability to raise more money from lobbyists), it also means that your party demands that you pay more money back to the party, or you may lose that lucrative committee seat. Still, it may surprise some folks that the least lucrative position is on the Judiciary Committee. That’s the committee that handled SOPA and PIPA… which involved no shortage of lobbyists. The cynical voice in the back of my head wonders if part of the SOPA/PIPA fight was really about turning the Judiciary Committee into a cash-flow positive committee, rather than a cash-flow negative committee.

Also, if you were wondering how/when most political fundraisers happen, there’s a breakdown for that as well:

If you’ve got the money, it looks like you could eat all your meals (and have some drinks) at fundraisers.

And if you’re wondering where these fundraisers happen? Planet Money has mapped those out as well. The most common locations happen to (conveniently) form a ring around the Capitol:

No reason to travel very far to collect your money, I guess…

Remeber your rights when dealing with Police!

Gun Owners: Invasions of Privacy & How to Properly Answer Questions