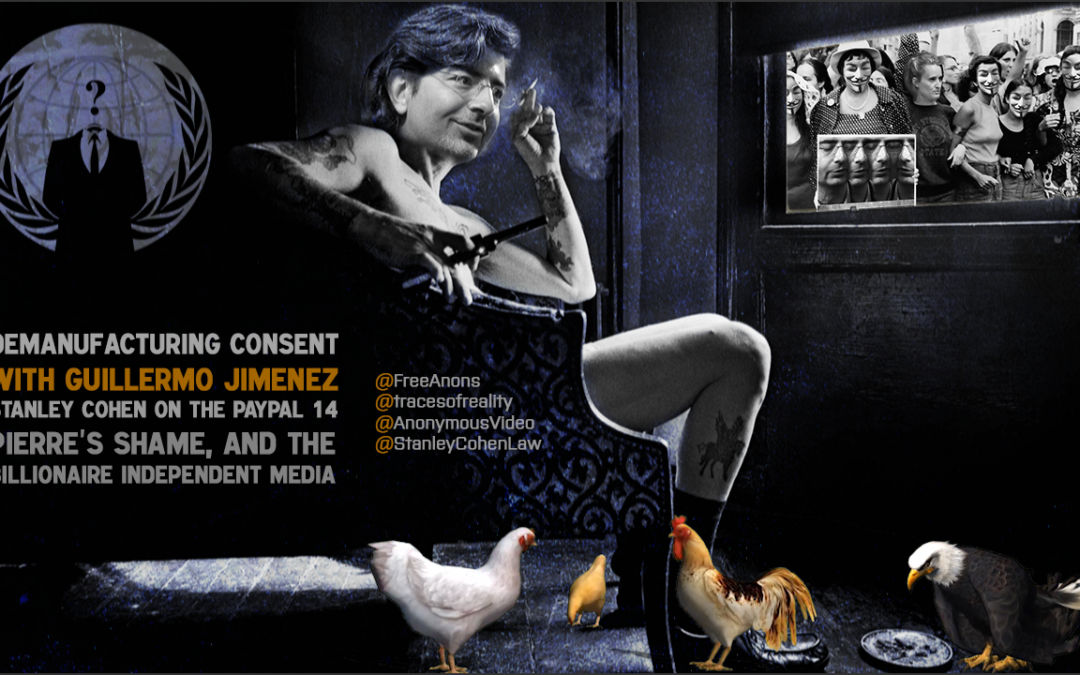 The PayPal14 were arrested nearly three years ago on the front lines of the digital information war, helping put the hacktivist movement and specifically Anonymous on the map. Now the whistleblower/hacktivist culture they helped launch into the global spotlight is being co-opted by journalists and “tech bros” all over to advance their careers, most notably journalist Glenn Greenwald’s.

As Greenwald gets a book tour, the PayPal14 get sentencing hearings. He is traveling the world to promote his book about Snowden’s NSA leaks, and the 14 are struggling to raise more than $80,000 in court-ordered restitution for eBay/PayPal, companies ultimately overseen by Greenwald’s billionaire backer, Pierre Omidyar. The brand that popularized Pierre-Greenwald’s Snowden leaks is only so “edgy” and “cool” because heroes like the PayPal14 took direct action.

When PayPal, part of Pierre’s eBay, blocked donations to WikiLeaks, the 14 and many others saw that the company wasn’t just a means of transferring money. It was also a means of control. PayPal’s blockade attacked our ability to vote with our dollars. Bank of America, VISA, MasterCard, and Western Union also participated in the financial blockade, a blatant corporate attempt at silencing dissent and suppressing information. The blockade destroyed 95% of WikiLeaks’ revenue.

The 14 along with countless others bravely launched DDOS attacks, the digital equivalent of sit-ins, against PayPal to protest the unjust blockade. They shut down PayPal’s public website briefly without interfering with backend financial transactions or causing lasting harm, contrary to Department of “Justice” claims in court. After having their lives disrupted for years, 11 of the PayPal14 still face federal charges. Greenwald faces applause.

Sure, Greenwald and Pierre occasionally express tepid “support” for the PayPal14. But where’s the $80,000? That’s lunch money to Greenwald or Pierre. For the PayPal14, it’s a crushing financial burden. Pierre, according to Forbes, rakes in $7.8 billion per year while the PayPal14 struggle to stay afloat. Pierre started off First Look, Greenwald’s news media outlet, with $50 million in funding–tens of millions more than $80,000.

Greenwald and Pierre aren’t just riding the hacktivist movement–they’re watering it down. As a consequence, most of Snowden’s NSA leaks go unpublished. What is published is heavily redacted, preventing more aggressive, non-celebrity journalists from finding answers and pro-freedom hackers from building better defenses.

Ask yourself, Why isn’t Greenwald facing charges? Why isn’t he asking countries for asylum?

The PayPal14 put themselves on the front lines for something genuinely revolutionary. They grabbed the mainstream media’s attention and helped establish the “digital information war” culture that boosts this new kind of journalism. But the mainstream media has finished enjoying the spectacle of the PayPal14’s arrests. Now they’re watching Greenwald sign books, while the PayPal14, largely forgotten, sign plea deals.

Some rising players in the digital information war have confided that they believe we should make noise for the
PayPal14 at Greenwald’s book tour stops. But they’ve also confessed that doing so would put their financial interests in jeopardy. The tentacles of Greenwald/Pierre/First Look are spreading and snatching up people right and left. Thanks to Jeremy Hammond’s Stratfor leak, we better understand how corporate interests isolate radicals who try to create change. The “Duchin formula,” continued by the private intelligence firm Stratfor, states that opportunists “by definition … take the opportunity to side with the powerful for career gain” and bring the realists and idealists along with them, leaving the radicals exposed and unsupported.

We ask you to support the radicals and not the careerists. Your worst enemy is not the person in opposition to you. It is the person occupying the spot you would be fighting from and doing nothing.

The goal is to raise that $80,000. If we do that, we win this battle. For now, everything else is secondary. Supporting the PayPal14 doesn’t just mean one tweet and you’re done. It means constant effort.

Specifically, attend Greenwald’s book tour stops listed below. If they’re sold out–and most are NOT–still go and make noise outside (or get inside anyway!). For sold-out events, there are often stand-by lines in case extra seats become available. Take the steps below, inside or outside the event–or both!

1. This is crucial: Make sure people are equipped to record videos of the protest, including Greenwald’s responses, and upload them as soon as possible. Share them with the hashtag #PayPal14. If possible, videos should include the donation link – http://www.gofundme.com/PayPal14 – and text accompanying the video should include the link also.

2. Explain why you’re protesting the book tour, by mic-checking, passing out fliers, waving signs, or any other useful method. Get creative! “Pay Back the PayPal14” and “Obey eBay” and “Glenn Greenbacks” would make good slogans. Above all, make sure people get the donation link: http://www.gofundme.com/PayPal14 This can be done online, but it is critical that it be done in person at the book tour stops as well, making as much noise as possible. Occupy the book tour stops!

3. When are Greenwald and Pierre donating? You find out!

BOOK TOUR STOPS AND LINKS FOR ADDITIONAL INFORMATION ON THE PAYPAL14:

Cooper Union’s Great Hall, in the Foundation Building
7 East 7th Street, between Third and Fourth Avenues
East Village in Manhattan
May 13, 2014 7:00 pm
Admission is free and open the public on a first-come first-served basis.
http://www.cooper.edu/events-and-exhibitions/events/authors-talk-glenn-greenwald-edward-snowden-and-nsa

MOST IMPORTANTLY, ask people to donate to the PayPal14 by going here:
http://www.gofundme.com/PayPal14

Microfinancing by Pierre’s Omidyar Network is loan-sharking the world’s most vulnerable:
https://www.nsfwcorp.com/dispatch/extraordinary-pierre-omidyar/

The “Duchin formula” and Stratfor:

How To Win The Media War Against Grassroots Activists: Stratfor’s Strategies

WikiLeaks on the financial blockade:
https://wikileaks.org/Banking-Blockade.html

Pierre started off First Look with $50 million in funding:
http://omidyargroup.com/firstlookmedia/pierre-omidyar-provides-initial-funding-of-50m-to-establish-first-look-media/

SPECIAL NOTE: This press release is intended to make sure people’s voices are heard in a way that educates the public.