Norway gunman claims a London connection and links to the EDL 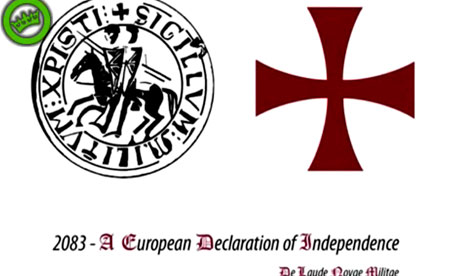 Anders Behring Breivik, the man behind the Norway killings that left 93 people dead, began his journey in extremist rightwing politics at a small meeting in London in 2002, according to his online manifesto, and may have attended a far right demonstration in the UK as recently as last year.

In a 1,467-page document that contains chilling details of his preparations for Friday’s attacks, Breivik outlines his UK links, claiming he met eight other extremists from across Europe in London in 2002 to “re-form” the Knights Templar Europe – a group whose purpose was “to seize political and military control of western European countries and implement a cultural conservative political agenda”.

The manifesto, signed “Andrew Berwick London 2011”, contains repeated references to his links to the UK far right group the English Defence League. On Sunday there were unconfirmed reports from one of the organisation’s supporters that the 32-year-old had attended at least one EDL demonstration in the UK in 2010.

“[B]ar one or two doubt the rest of us ever met him, altho he did come over for one of our demo in 2010 … but what he did was wrong,” said an EDL member online.

In the manifesto titled 2083: A European Declaration of Independence, Breivik writes: “I used to have more than 600 EDL members as Facebook friends and have spoken with tens of EDL members and leaders. In fact; I was one of the individuals who supplied them with processed ideological material (including rhetorical strategies) in the very beginning.”

The EDL – which has staged a series of street demonstrations, many of which have turned violent, since it was formed two years ago – issued a statement on Sunday condemning the attacks in Norway. It added that the league was a peaceful organisation which rejected all forms of extremism.

“There has never been any official contact between him and the EDL, our Facebook page had 100,000 supporters and receives tens of thousands of comments each day,” it added. “And there is no evidence that Breivik was ever one of those 100,000 supporters.”

The group pointed out that Breivik was critical of the EDL in the “manifesto”, describing it as “dangerously naive”.

Another UK-based organisation, Stop Islamisation of Europe , told Reuters that Breivik had tried to join their Facebook group but had been rejected over his apparent neo-Nazi links. However, they said it was possible he had attended one of its demonstrations.

Emblazoned with a red Iron Cross and published in English, the manifesto appeared online a few hours before the attacks. It appears to be a mixture of bomb-making manual, diary and political rant against a range of perceived enemies from “cultural Marxists” to Muslims, liberals and journalists.

It includes an detailed diary covering the 82 days leading up to the attacks which reveals Breivik’s mood swings, his attempts to make explosives on a remote farm and even his favourite DVDs.

On the day he was to kill 93 people Breivik wrote: “The old saying; ‘If you want something done, then do it yourself’ is as relevant now as it was then.” A few hours later he added: “I believe this will be my last entry. It is now Fri July 22nd, 12.51.” Berwick signed off “AB Justiciar Knight Commander, cell 8, Knights Templar Europe.”

The document details Breivik’s isolated life on the farm as he carried out meticulous preparations for the attack, testing explosives and obtaining weapons.

It reveals an obsession with the Crusades and a supposed threat to Christian Europe posed by Muslim immigrants and mainstream political leaders. Breivik predicts a European civil war will take place in three stages, ending in 2083 with the execution of “cultural Marxists” and the deportation of all Muslims.

Friday’s attack was being planned for at least 18 months, according to the document. Breivik expresses concern that preparations for the attack and the manifesto would alert the security services.

“I do fear sometimes that my endeavours relating to the research of the book, and acquisitions of these addresses has resulted in me being put on various watch lists,” an entry dated March 2010 reads. “The question is; have they flagged me? I guess I will find out eventually.”

In one section Breivik argues that is better to kill civilians than those who would offer more resistance, writing: “It is much more rational and pragmatical to focus on the easier unprotected targets instead of sacrificing good men on an impossible target … we should target unprotected category A and B traitors first and foremost.”

He goes on to outline plans for a possible attack on a gathering of investigative journalists which he says is one of the “most attractive” potential targets.

“To illustrate; in Norway, there is an annual gathering … where the most notable journalists/editors from all the nations media/news companies attend (500 delegates – 98% of them are considered ‘quality category B traitor targets’.”

He sets out a detailed plan for a car or lorry bomb “covered with layers of projectiles for maximum damage” followed by an attack with rifles and flame throwers.

Breivik advocates attacks on traitors across Europe. “[W]e should under normal (optimal) circumstances not exceed (per 2010) aprox. 45 000 dead and 1 million wounded cultural Marxists/multiculturalists in Western Europe.”

Anti-racist groups in the UK said they were not aware of the Knights Templar Europe and cautioned that Breivik may have made up some or all of the details.