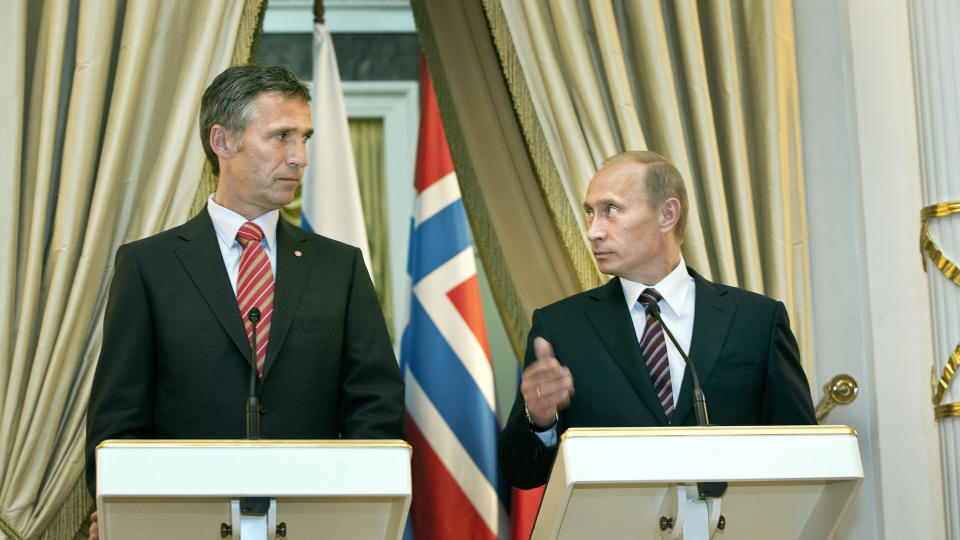 According to the FSB, Stoltenberg first learned of this plot against his country this past Wednesday after reading a “top secret” report prepared for him by the Norwegian Intelligence Service (NIS) on the late March computer attack against Norway’s top military leaders that showed them involved in a conspiracy with Britain’s MI5 Security Service and the United States Central Intelligence Agency (CIA) to launch a “two-phase” attack upon Norway modeled after false-flag operations in both Australia and America in the mid-nineties.

The false-flag operations being modeled in Norway were based on the 19 April 1995 bombing attack on the Oklahoma Alfred P. Murrah Federal Building said caused a lone right-wing Christian fundamentalist who used a fertilizer bomb that killed 168, and the 28 April 1996 Port Arthur massacre in Australia where a lone gunman killed 35 mainly because the police failed to show up in a timely manner, and which the aftermath of both attacks caused a fundamental shift away from freedoms and liberties these peoples once enjoyed.

The FSB further reports that this false-flag attack on Norway was a “clear textbook example” of an Operation Northwoods operation designed and prepared by US Military experts. Operation Northwoods was a series of false-flag proposals that originated within the United States government in 1962. The proposals called for the CIA or other operatives, to commit acts of terrorism in US cities and elsewhere in order to influence public opinion and have been used by many Western governments over these past five decades.

FSB experts note in this report that the false-flag attacks on Norway further mirror those of Oklahoma City and Port Arthur in: 1.) A large vehicle holding a powerful fertilizer bomb was able to gain undetected entrance to a protected government centre; 2.) The armed police response to an ongoing massacre of civilians was delayed for reasons still not explained; 3.) A lone suspect has been indentified as the sole perpetrator of the attacks contrary to witness statements that more people were involved; 4.) The lone suspect is denied the right to an open hearing before the public.

This report also notes that within hours of these attacks occurring, a “virtual flood” of information relating to the suspected mastermind of this massacre was released indentifying him as a “blond-haired blue-eyed” Norwegian named Anders Behring Breivik and caricatured as a right-wing Christian fundamentalist. A person which (coincidentally?) the United States had warned barely 24-hours earlier in a video released by their Department of Homeland Security (DHS) was the type of person they feared most would carry out such a terror attack.

The critical problem with the flood of information being released on/or by Breivik, the FSB asserts, is to what is true and what isn’t. This issue was made even more important by American computer experts noting that the Facebook page said belonging to Breivik appears to have been faked, and as they note:

1: Why is there a version of Anders Behring Breivik’s Facebook profile not showing Christian / Conservative? Even Google’s cache of the Facebook profile retrieved on Jul 22, 2011 23:52:36 GMT supports this factor.

2: How was Christian / Conservative added prior to the profile being removed from Facebook? If our PDF was printed out/saved at Jul 23 01:39 GMT, and the profile was deleted soon afterwards by Facebook, how was a detained Anders Behring Breivik able to change it?

3: Which then needs to be asked, Who had access to in changing the Profile before it was removed?

Aside from the “most likely” faked Facebook page, Breivik is, also, said to have posted an astonishingly detailed 1,500-page manifesto and video [view on left] titled “2083: A European Declaration Of Independence” datelined “London, 2011” on the Internet that claims “the number of Muslims in Western Europe is “reaching critical mass” and there is a core of Cultural Communist elites in Western Europe who really want to destroy Western civilization” and that “Europe will burn again.”

Breivik further said he regarded himself as a successor to the medieval Knights Templar, and claimed to have been recruited at a meeting in London in April 2002, which was hosted by two English extremists and attended by eight people in total. Breivik’s ties with London, and hence MI5, was due to his father being a top economist at the Norwegian Embassy in London where Anders was described as a “mummy’s boy” and “privileged” son of an elite liberal family. [Especially interesting to note about this description of “mummy boy” Breivik is his stating that the main target of his attack was Norway’s “Mother of the Nation” and former Prime Minister Gro Harlem Brundtland.]

The FSB, however, in this report disputes Breivik’s ties with the Knights Templar stating, instead, that this false-flag attack has provided an “ancillary benefit” to the West’s royal and banking elite classes in discrediting this ancient order as “open warfare” between them looms, and as we had detailed in our 21 July report “Murdoch Threat To Expose Obama As “Christ-Child” Ignites Western Fury.”

To the reason(s) behind this attack, this FSB report states, is a “desperate attempt” by British, European Union and American banking interests to force Norway into their “union” [Norway is not a member of the EU] in order to loot their Sovereign Wealth Fund of its estimated $1.5 Trillion in wealth which without the entire Western economy may collapse. Important note, the FSB says, is that what is being done to Norway has already been done to Libya when in what is now called the “Financial Heist of the Century” these same elites launched an unprovoked attack upon this North African nation and promptly looted it of nearly $150 Billion of their Sovereign Wealth Fund in order to sustain their crumpling empire.

Though there is more, much more, contained in this FSB report that we will have to examine further in order to report to you on it accurately upon it. So, and in closing this first report on this tragedy we’ll end with some of the words attributed to Breivik that in light of what this whole issue is being made out to be do, indeed, note us paying attention to them:

“A majority of the people I know support my views, they are just apathetic. They know that there will be a confrontation one day, but they don’t care because it will most likely not happen within the next two decades I am a pioneer in this fight, and I have no doubt whatsoever that we will see a political shift in our favor sooner than we might expect. It might look grim at the moment, but we are after all fighting a self-defeating ideology (Cultural Communism that is, not Islam). The only pragmatic approach towards Islam is to isolate it to Muslim countries once we are in a position to do so — on September 11th, 2083.”