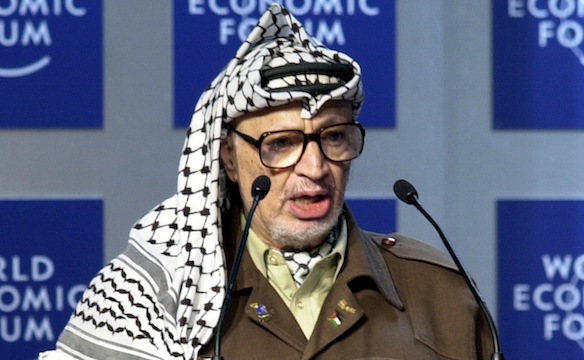 Now we know he was poisoned – but by whom?

Yasser Arafat died on November 11, 2004, of a mysterious ailment. His enemies spread the rumor he had AIDS: David Frum, with typical classiness, claimed he had contracted AIDS as a consequence of having sex with his bodyguards. Now, however, it has been revealed Arafat was poisoned: the cause of his death was exposure to very high levels of polonium-210 [pdf], a rare radioactive substance. An investigation conducted by Al Jazeera showed Arafat’s personal items, released to the media organization by his widow, contained several times the normal level of polonium that would normally be detected on such items. The Palestinian leader’s terminal symptoms were similar to those experienced by victims of polonium poisoning: the substance targets the gastrointestinal tract and the subject wastes away.

Arafat’s Ramallah compound had been bombed several times by the Israelis, and they had the place surrounded – yet still he persisted. They couldn’t get him out. Worse, his plight was becoming a metaphor for the condition of his people, who were – and still are – prisoners in their own land. A former adviser claimed he was poisoned by the Israelis, who detained the Palestinian ambulance used to deliver Arafat’s medications to the Ramallah compound. At the time, one tended to write this off as a purely polemical exercise: in light of the new evidence, however, the question has to be asked.

Simply by continuing to exist in the face of such a sustained assault, Arafat was defeating the Israelis every day. They had to get rid of him. Did they? We’ll never know for sure, but it is worth noting that Israeli threats to kill him preceded his untimely death by less than a year. As is well-known, Israeli intelligence has carried out numerous assassinations: it is simply another tool in their international operations, one they have never hesitated to utilize. A passport-falsification scheme involving New Zealand, Britain, France, Spain, and a number of other countries was widely believed to have been meant to equip the Mossad’s crack team of assassins, who could slip into – and out of – target areas at will.

The Israelis hated Arafat with a particular passion, for two reasons:

1) His longevity – The Palestinian movement is thick [pdf] with factions, but thin when it comes to recognizable leaders. Arafat was the principal leader, and no one since his death has achieved his stature. He was a political survivor, having lived through numerous assassination attempts, and deflected the schemes of internal enemies to displace him. Simply by sticking around for so long, he became a living symbol of the Palestinian struggle for self-determination – and that is one big reason why the Israelis got rid of him.

2) His secularism – The Israelis encouraged the growth of groups such as Hamas in the beginning, in order to split away the more religious elements from the decidedly secular Palestine Liberation Organization/Fatah, which Arafat headed. It is easy to sell the Palestinians as crazed jihadists when a group like Hamas or Islamic Jihad is the most visible champion of their cause: the secular PLO presented the Israelis with a public relations problem. There’s another reason for the Israelis to have knocked him off.

One aspect of this case is extremely odd: polonium-210 is the same poison Alexander Litvinenko was dosed with. Litvinenko, a former KGB official, converted to Islam, joined the Chechen rebels, and became an associate of Boris Berezovsky, the notorious Russian oligarch wanted on charges of embezzlement in his home country. Litvinenko and Berezovsky are the Russian version of 9/11 Truthers: they believe practically every terrorist attack on Russian cities has been “staged” by Vladimir Putin in order to keep him in power. When he became ill, Litvinenko charged the Russian spy agency with poisoning him – although that seems highly unlikely.

Polonium-210 isn’t something you can buy off the shelf at your local Walmart. It isn’t even something a mad scientist might cook up in his home lab. About 100 grams are produced each year for specialized technical uses. The only entities with access to this sort of thing are state actors, or, at least, a private organization with very substantial resources at its disposal.

What’s interesting is that a diplomatic cable, dated Dec. 26, 2006 and published by WikiLeaks, details the conversation of a US diplomat with Russian spook Anatoly Safonov in which Safonov claims the Russians told the British about the importation of “nuclear materials” into London during the Litvinenko affair – and were told that the whole thing was “under control before the poisoning took place.” In the course of the same conversation, Safonov – Putin’s chief representative on terrorism-related matters – went on to describe a number of threats and their possible sources:

While the use of “sic” is meant to indicate our diplomat’s incredulity at the inclusion of Israel in this list, what we now know about how Arafat died should tear away the blinders from several sets of eyes – yes, even at the US State Department.

NOTES IN THE MARGIN

I note with sadness and a real sense of loss the departure of Scott Horton, the host of Antiwar.com Radio, from our staff. We wanted to keep him on, but we just couldn’t afford him anymore. Times are tough, but this is a big blow: Scott’s interviews with the Big Names in the foreign policy universe are always informed, and in his inimitable style he always laced his programs with humor and a keen intelligence. I can’t even begin to tell you how much he will be missed, ­ but that’s life these days, unfortunately.