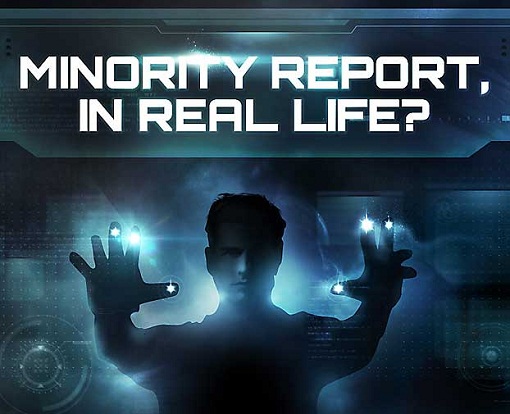 The era of Big Data is upon us. Major corporations in the areas of advertising, social media, defense contracting, and computing are forming partnerships with government agencies to compile virtual dossiers on all humans.

This data integration initiative is taking place across the board in our largest federal agencies and departments as part of an Office of Science and Technology outline (PDF) that includes a $200 million upfront investment, as well as a $250 million annual investment by military departments into human-computer interaction.

The $200 million in the Obama program will be spread among the National Institutes of Health, Department of Defense, National Science Foundation, the Department of Energy, the U.S. Geological survey, and DARPA to see that the information they collect will move quickly “from data to decisions.”

Seeing the vast potential of Big Data management and applications, Oblong Industries – the actual creator of the software that appeared in the movie Minority Report, (known by its propriety name g-speak) – is now offering a commercial version in the marketplace. An AFP article posted at Raw Story is quick to point out that the software has been stripped of its “pre-crime” detection analytics. But should this blanket dismissal by a mainstream news agency be comforting in light of stated U.S. government goals that seek to turn science fiction into science reality?

John P. Holdren, Obama’s science czar, and author of the controversial eugenics tome, Ecoscience, is one of those directing the solution to the data overload problem. This alone should force us to be hyper-vigilant.

We also know that the NSA is constructing a massive new $2 billion data center that aims to expand its spy activities by September, 2013:

A project of immense secrecy, it is the final piece in a complex puzzle assembled over the past decade. Its purpose: to intercept, decipher, analyze, and store vast swaths of the world’s communications as they zap down from satellites and zip through the underground and undersea cables of international, foreign, and domestic networks.

Flowing through its servers and routers and stored in near-bottomless databases will be all forms of communication, including the complete contents of private emails, cell phone calls, and Google searches, as well as all sorts of personal data trails—parking receipts, travel itineraries, bookstore purchases, and other digital ‘pocket litter. It is, in some measure, the realization of the “total information awareness” program created during the first term of the Bush administration… (Source)

The FBI has recently announced that facial recognition will be coming to a state near you:

Recently-released documents show that the FBI has been working since late 2011 with four states—Michigan, Hawaii, Maryland, and possibly Oregon—to ramp up the Next Generation Identification (NGI) Facial Recognition Program. When the program is fully deployed in 2014, the FBI expects its facial recognition database will contain at least 12 million “searchable frontal photos.” (p. 6) (Source)

While Oblong Industries claims to have disabled the analytics portion of the software that could be used in pre-crime screening taken right from the Minority Report film, they state that private companies and law enforcement agencies could certainly augment their scaled-back version by introducing their own analytics.

Furthermore, the earlier-mentioned AFP article downplays the significance of the software by stating that “Oblong currently has no government customers in the United States or abroad but offers itself as ‘a core technology provider.'”

However, two of Oblong’s current clients are Boeing – the world’s second largest defense contractor and drone specialists; and #12 General Electric – specialists in electronic warfare components and military communication systems. Their combined annual sales are more than $35 billion, which makes it quite likely that new technology will be embraced and proliferated. (Source)

Oblong’s own website states that their company “works with Global Fortune 500 companies, government agencies, and universities to develop custom g‑speak solutions.” Their application areas include:

To reinforce the obvious, Oblong’s Chief Executive, Kwin Kramer, has stated flatly that, “We think law enforcement and intelligence are big data users and we think our technology is the leader.”

It is also worth noting that the g-speak “Minority Report” technology was developed at MIT and has been 30 years in the making. MIT has quite a storied history of connections to intelligence agencies; the CIA having actually started the Massachusetts Institute of Technology Center for International Studies (MIT-CIS) in 1950. (Source)

The implied connections are in plain view on MIT’s own website: http://web.mit.edu/policies/14/14.5.html

And Orwell smiles.
Until recently, we might have held out hope that it was the vastness of data collection that was the weakest point for potential tyrants, as it was nearly impossible to sift through, manage, and apply all of it. With the birth of Big Data applications that are literally coming straight from science fiction, however, we might do well to accept the possibility of a truly dystopian reality descending upon us even faster than the speed of thought.

For a glimpse into the cool sales pitch behind Oblong Industries’ Big Data management software, please view the following video. While we should keep an open mind to how advancements in computer tech can be exciting and rewarding, while offering novel ways of human interaction, it is most important to ensure that these technologies are not hoarded by governments and elites who have a clear history of negatively impacting true human development, as well as freedom of movement, expression and self-determination.