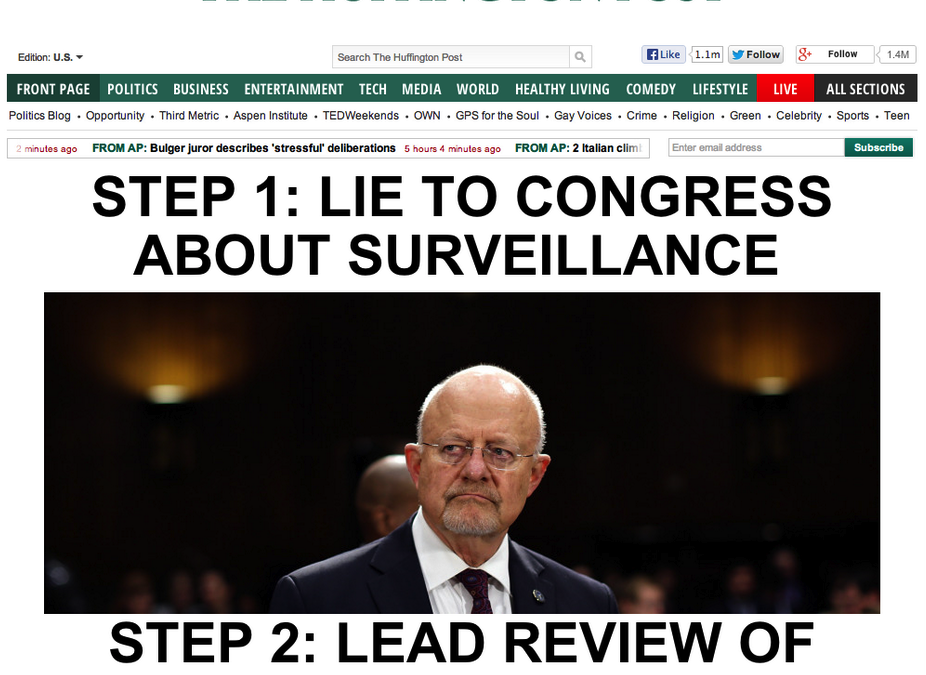 A fox raids a chicken coop, killing all the chickens. With feathers sticking out of the sides of his mouth, stinking of blood, he swears he didn’t do it. He wasn’t even there! Days later, in response to sustained cries of protest from the animals, the farmer commissions an investigation to determine who was responsible for the grisly scene. To the shock and horror of the farm animals, he appoints the fox to lead the investigation. The fox issues a statement pledging to regain the public trust.

The government is the farmer, we are the farm animals, and James Clapper is the fox.

Director of National Intelligence James Clapper, the all-powerful spy infamous for lying to congress about the Section 215 bulk metadata program, will establish a “review group to examine intelligence collection,” the government tells us. This incredible turn of events comes, as Marcy Wheeler points out, only 72 hours after President Obama promised a thorough review of intelligence programs conducted by “outside,” “independent” actors.

James Clapper is about as inside as it gets. As Jameel Jaffer observed on Twitter, appointing Clapper to oversee a review of intelligence programs is akin to assigning the author of the Bush administration torture memos, John Yoo, “to lead [an] independent inquiry into the CIA torture program.”

That’s bad enough. But it gets worse.

When the government announced the Clapper ‘review,’ it offered us this quote from the perjurer himself, describing what his ‘review group’ sets out to do:

The review group will assess whether, in light of advancements in communications technologies, the United States employs its technical collection capabilities in a manner that optimally protects our national security and advances our foreign policy while appropriately accounting for other policy considerations, such as the risk of unauthorized disclosure and our need to maintain the public trust.

Read that sentence very carefully. Completely absent from the passage is any reference to the legality, democratic compatibility, or constitutionality of the surveillance programs.

Not only is the fox set to investigate the incident at the hen house. He has told us up front that the programs’ impact on civil liberties is not even up for discussion. Instead, the review will assess whether US surveillance programs are thorough enough, and whether they’ll continue ‘advanc[ing] our foreign policy’ interests amidst ‘the risk of unauthorized disclosure.’ (This, I imagine, is code for: How can we keep these programs secret so as not to thoroughly piss off our allies?)

Instead of looking at the ways in which his spy programs kill democracy and obliterate any possibility for political freedom, Clapper admits at the outset that his ‘review group’ will seek to determine whether and how the intelligence agencies can keep a tighter lid on their global surveillance operations.

And then there’s the horrifying kicker. The review group will seek to ‘account for’ one last ‘policy consideration,’ he says: ‘our need to maintain the public trust.’

At least Clapper isn’t totally unaware of what’s going on around him; it’s true that the public does not trust the intelligence apparatus. But while public trust in government is important, more important than trust is a transparent and accountable architecture that deserves to be trusted. Clapper’s announcement of his intention to figure out how to regain the public trust in the absence of even one mention of reforming the spy programs to conform with constitutional or democratic principles is positively chilling. It is an acknowledgement that our government is more interested in appearances than it is in actual accountability. And it suggests that the primary lesson the establishment has learned in the past few months has been that it should do a better job lying to the public — not that it should roll back the monstrous surveillance state.

This statement about ‘the public trust’ makes clear that the administration views the fallout from the Snowden leaks, and American and global outrage over NSA surveillance and government mendacity, as just another public relations war. That’s too bad, because the leaks have in fact ignited a war over the soul of this country, raising absolutely critical questions about the possibility for democracy in the 21st century.

Clapper is set to deliver his interim findings to the President within two months, and will publish a report with recommendations by mid-December. When those recommendations become public, don’t forget who put them together, and what his intentions were from the outset: not to examine the programs’ constitutionality, but rather to figure out how to spin, entrench, and prolong them.

UPDATE: In a bizarre about-face, the Obama administration is now fiercely denying that Clapper will control the “review group.” Maybe this Huffington Post page pushed them over the edge: