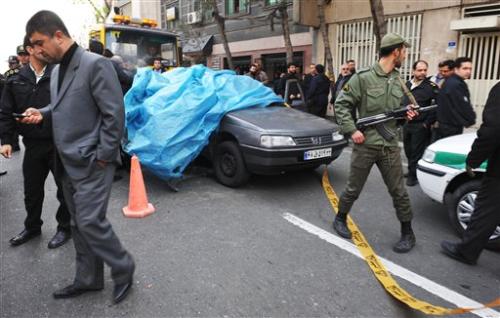 Tehran – An Iranian nuclear scientist was killed in a Tehran car bombing on Wednesday that the Islamic republic immediately blamed on Israel and the United States, worsening a tense international standoff over its atomic programme.

Iranian officials noted that the assassination method – two men on a motorbike attaching a magnetic bomb to the target’s vehicle – was similar to that used in the killings of three other of its scientists over the past two years.

Iran’s parliament erupted with yells of “Death to Israel” and “Death to America” after Wednesday’s attack.

Mostafa Ahmadi Roshan, 32, died immediately in the blast, which occurred in front of a university campus in east Tehran.

His driver/bodyguard later died of his wounds, the Fars and ILNA news agencies reported. A third occupant of the Peugeot 405 was wounded and in hospital.

Ahmadi Roshan was a deputy director at Iran’s Natanz uranium enrichment facility, according to the website of the university he graduated from a decade ago, Sharif University.

He was also an academic and member of the Basij militia controlled by Iran’s Revolutionary Guards, the Basij said in a statement.

The scientist was specialised in making polymeric membranes to separate gas. Iran uses a gas separation method to enrich its uranium.

‘Scientists more determined than ever’

It said “the futile actions by the criminal Israeli regime and America will not disrupt the path the Iranian people have chosen” and nuclear activities will continue.

“This terrorist act was carried out by agents of the Zionist regime (Israel) and by those who claim to be combating terrorism (the US) with the aim of stopping our scientists from serving” Iran, Rahimi told state television.

The foreign ministry also blamed Israel and the US.

The vice president, in charge while President Mahmoud Ahmadinejad wraps up a Latin America tour, added: “They (Israel and the US) should know that Iranian scientists are more determined than ever in striding towards Iran’s progress.”

There was no immediate official Israeli or US reaction to the accusations.

Media in both countries, though, gave prominent play to the car bombing.

Israeli outlets also relayed comments by Israel’s military chief of staff, Lieutenant General Benny Gantz, to MPs on Tuesday saying that 2012 was to be “a critical year” given Iran’s nuclear drive, international pressure – “and things which happen to them (the Iranians) in an unnatural way”.

Three other Iranian scientists were killed in 2010 and 2011 when their cars blew up in similar circumstances. At least two of the scientists had also been working on nuclear activities.

The current head of Iran’s atomic energy organisation, Fereydoun Abbasi, escaped another such attempt in November 2010, getting out of his car with his wife just before the attached bomb exploded.

Those attacks were viewed by Iranian officials as assassination operations carried out by Israel’s Mossad intelligence service, possibly with help from US counterparts.

Wednesday’s killing sharpened an international confrontation over Iran’s nuclear programme in which threats and counter-threats are being increasingly backed with militarised displays of muscle.

Western nations, the US at the fore, are steadily ratcheting up sanctions on Iran with the aim of fracturing its oil-dependent economy.

Iran has responded by saying it could easily close the Strait of Hormuz – a chokepoint for 20% of the world’s oil at the entrance to the Gulf – if it is attacked or if sanctions halt its petroleum exports.

It has also threatened to unleash the “full force” of its navy should the United States redeploy an aircraft carrier to the Gulf, where the US Fifth Fleet is based.

The US said closing the strait is a “red line” that should not be crossed and said it would keep sending its warships to the region.

US ally Britain has dispatched its most modern destroyer, HMS Daring, to the Gulf to join other British ships there.

Iran, meanwhile, says it is about to hold more navy manoeuvres in the strait, following ones nearby that ended less than two weeks ago in which, pointedly, three anti-ship missiles were test-fired.

US-Iranian tensions have also worsened following an Iranian court’s death sentence this week on an American-Iranian former Marine it found guilty of spying for the CIA, and Iran’s capture last month of what it said was a CIA drone.

Tehran’s determination to push ahead with its nuclear activities were underlined by the International Atomic Energy Agency’s confirmation on Monday that Iran has started enriching uranium at a second facility – its Fordo fortified underground bunker southwest of the capital.

The IAEA two months ago issued a report strongly suggesting that Western fears of Iranian research into nuclear weapons was backed by a lot of evidence.

Iran, though, insists that its atomic programme is exclusively for energy and medical ends, and it has declared itself open to resuming nuclear negotiations with world powers that collapsed a year ago.