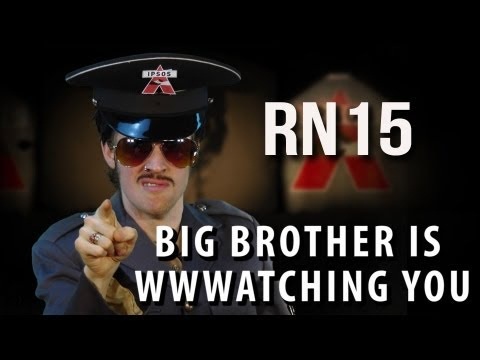 Juice Rap News: Episode 15 – Big Brother is WWWatching You. September 2012 rocks around with some crucial developments in the ongoing struggle over the future of the internet. Will it remain the one open frequency where humanity can bypass filters and barriers; or become the greatest spying machine ever imagined? The future is being decided as we type. Across Oceania, States have been erecting and installing measures to legalise the watching, tracking and storage of data of party-members and proles alike. If they proceed, will this place ever be the same? Join our plucky host Robert Foster as he conducts an incisive analysis of the situation at hand. Joining him are newly appointed Thought Police General at the Pentopticon, Darth O’Brien Baxter, and a surprisingly lucid Terence Winston Moonseed. Once again, in the midst of this Grand Human Experiment, we are forced to ask tough questions about our future. Will it involve a free internet which will continue to revolutionise the way the world communicates with itself? Or is our picture of the future a Boot stamping on this Human InterFace forever?

– SUPPORT the creation of new episodes of Juice Rap News,
a show which relies on private donations: http://thejuicemedia.com/donate

– CREDITS:
* MAIN BEAT Produced by the Goat Beats http://www.thegoatbeats.com
* ORCHESTRATION & George-Orwell theme by Adrian Sergovich
* ARTWORK by Zoe Tame of http://visualtonic.com.au for images and website wizardry!
* EFFECTS & ANIMATIONS by Jonas Schweizer (See his work: http://www.indiegogo.com/CaribbeanNewcomer)
* PROPS: Thanks to Zoe Umlaut of Umlautronics for constructing the Juice Channeling Portal, worryingly close to spec. And to Gilles Gundermann for sourcing awesome Orwellian props.
* CAPTIONS: Merci to Koolfy from la Quadrature du Net, for creating English Captions.
* Thanks to Dave Abbott for technical advice; and deep gratitude to Lucy & Caitlin for all the ongoing support (and patience).

‘Government’ as explained to an Alien Visitor