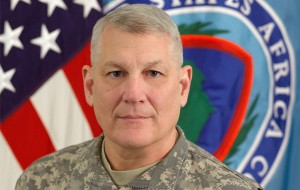 After numerous flips and flops by the Obama administration, which originally attempted to paint the incident as a Muslim outcry over an anti-Islamic video, whistle blowers throughout the U.S. government, including within the White House, the State Department, national intelligence agencies and the U.S.military have made available stunning details that suggest not only did operational commanders have live visual and audio communications from drones overhead and intelligence assets on the ground, but that some commanders within the military were prepared to go-it-alone after being told to “stand down.”

Africom commanding officer U.S. General Carter Ham, after being ordered to essentially surrender control of the situation to alleged Al Queda terrorists and let Americans on the ground die, made the unilateral decision to ignore orders from the Secretary of Defense and activated special operations teams at his disposal for immediate deployment to the area.

According to reports, once the General went rogue he was arrested within minutes by his second in command and relieved of duty.

“(The) basic principle is that you don’t deploy forces into harm’s way without knowing what’s going on; without having some real-time information about what’s taking place,” Panetta told Pentagon reporters. “And as a result of not having that kind of information, the commander who was on the ground in that area, Gen. Ham, Gen. Dempsey and I felt very strongly that we could not put forces at risk in that situation.”

The information I heard today was that General Ham as head of Africom received the same e-mails the White House received requesting help/support as the attack was taking place. General Ham immediately had a rapid response unit ready and communicated to the Pentagon that he had a unit ready.

General Ham then received the order to stand down. His response was to screw it, he was going to help anyhow. Within 30 seconds to a minute after making the move to respond, his second in command apprehended General Ham and told him that he was now relieved of his command.

The question now is whether the American people will hold to account the chain of command responsible for leaving our people behind, fabricating a politically expedient story, and continuing to sell the now defunct lie(s) even after all of their variations of the story were found to be false and misleading.

A General who made the decision to assist diplomatic and intelligence assets on the ground has been arrested and will likely be retired or worse, while those who ordered the removal of embassy security details and ordered U.S. forces to stand-down are left to go on about their business and likely risk more American lives in the future.

In some circles the actions of those at the very top of the command structure during the Bengzahi attacks would be considered traitorous.

via  The Daily Sheeple