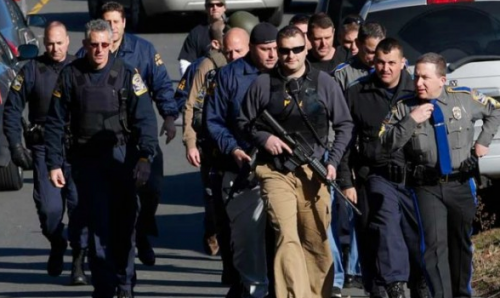 I’ve been listening to a stream of police dept. audio during the initial response to the Sandy Hook shooting.

This link has most of its action in the first four minutes:

This next link, for me, was somewhat clearer:

Starting at roughly 3:13, there are relevant police comments:

We get the distinct sense there are multiple shooters.

Reporters on the scene have, as far as I know, provided no information, and neither have police.

The suspects have disappeared down the memory hole.

Then we have these television interviews with families of the victims.

It’s astounding. Parents are smiling. They’re actors from Central Casting? One thing is for sure.

They’re androids, if you measure their responses against reports of what happened in the Sandy Hook School.

And as androids, they’re only matched by the TV reporters who are interviewing them.

If you’re tempted to say the parents and family members are in shock, or they’re reacting to being on television, forget it. Their attitudes don’t match a massacre by any stretch of the imagination.

Is Sandy Hook/Newtown a Stepford Village? Are these people all programmed to be pleasant and accommodating No Matter What?

It’s about as bizarre as the purported video footage of the Aurora theater during the shootings there this summer. As people exit the lobby and come out on to the street, there is no sign of blood and no one is coughing from the reported tear gas inside the theater.

With these Sandy Hook parents, we’re looking at a level of conditioning in which Being Nice can completely overwhelm even the murder of one’s own child.

Tears? Not one person in these interviews has actual tears running down his or her face.

One of the fathers, Robbie Parker, has had his interview played and replayed all over the planet on YouTube, and you can watch him smiling and grinning, for all the world looking like he’s just been appointed CEO of a company he works for…and then he steps to a podium to make his statement, and as one poster succinctly describes it, “gets into character.”

This isn’t just an internal event. You can watch Parker huffing and puffing and pushing himself into what he thinks is a tragic and grief-stricken state of mind.

He does it so badly you wonder why no one in the room calls him on it. It’s beyond strange. Yet reporters later talked about Parker “struggling through tears and suffering to make a heartfelt statement…” The reporters are just as deranged as Parker is.

This boggling show isn’t confined to Sandy Hook. A commenter below a Deseret News article on Parker replied: “Brave young father, wise to forgive early and choose to move forward—nothing can be gained by dwelling on what cannot be changed.”

At times, watching these interviews, I wondered whether the parents had been conditioned to believe, in the face of ANYTHING, that good and nice children all take a choo-choo train to heaven and there is nothing to regret about their murders at all.

In an earlier article, I pointed out that, indeed, at 1hr:58 of The Dark Knight Rises, Gary Oldman, talking about an impending attack on “Strike Zone 1,” is pointing to the words “Sandy Hook” on a map in front of him.

These are the only legible words on the map.

By happenstance, the production designer of Dark Knight Rises, Nathan Crowley, is related to the infamous British black-magic legend, Aleister Crowley, who was sometimes called The Great Beast 666.

In an interview, Nathan said, “Yes, Aleister Crowley is a direct relative, he’s my grandfather’s cousin, but we were never allowed to even mention his name because we were a very Quaker family.”

Nathan is also the production designer of Lady Gaga’s video ad for her Perfume, Fame.

In terms of “the dark side,” the full 5:41 version of the video-ad makes Dark Knight Rises look like a Disney cartoon by comparison.

But not to worry. What happened at Sandy Hook was exactly as the major media portrayed it, and nothing more. Sure. You bet.