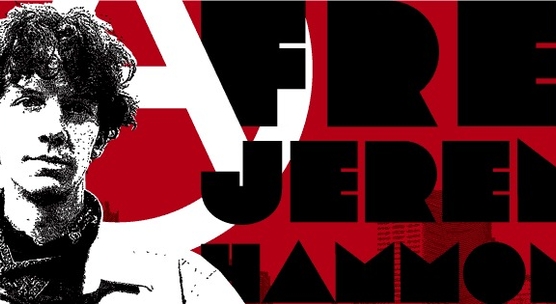 23 July 2012 – Statement from Jeremy Hammond, alleged Anonymous hacker – read in Foley Square, NYC
Thanks for everybody coming out in support! It is so good to know folks on the street got my back. Special thanks to those who have been sending books and letters, and to my amazing lawyers.
I remember maybe a few months before I was locked up I went to a few noise demonstrations a the federal jail MCC Chicago in support of all those locked up there. Prisoners moved in front of the windows, turned the lights on and off, and dropped playing cards through the cracks in the windows. I had no idea I would soon be in that same jail facing multiple trumped up computer hacking “conspiracies.”
Now at New York MCC, the other day I was playing chess when another prisoner excitedly cam e up as was like, “Yo, there are like 50 people outside the window and they are carrying banners with your name!” Sure enough, there you all were with lights, banners, and bucket drums just below our 11th floor window. Though you may not have been able to here us or see us, over one hundred of us in this unit saw you all and wanted to know who those people were, what they were about, rejuvenated knowing people on the outside got there back.
As prisoners in this police state – over 2.5 million of us – we are silenced, marginalized, exploited, forgotten, and dehumanized. First we are judged and sentenced by the “justice” system, then treated as second class citizens by mainstream society. But even the warden of MCC New York has in surprising honesty admitted that “the only difference between us officers here and you prisoners is we just haven’t been caught.”

The call us robbers and fraudsters when the big banks get billion dollar bailouts and kick us out of our homes.

They call us gun runners and drug dealers when pharmaceutical corporations and defense contractors profit from trafficking armaments and drugs on a far greater scale.

They call us “terrorists” when NATO and the US military murder millions of innocents around the world and employ drones and torture tactics.

And they call us cyber criminals when they themselves develop viruses to spy on and wage war against infrastructure and populations in other countries.

Yes, I am one of several dozen around the world accused of Anonymous-affiliated computer hacking charges.

One of many here at MCC New York facing trumped up “conspiracy” charges based on the cooperation of government informants who will say anything and sell out anyone to save themselves.

And this jail is one of several thousand other jails, prisons, and immigrant detention centers – lockups which one day will be reduced to rubble and grass will grow between the cracks of the concrete.

So don’t let fear of imprisonment deter you from speaking up and fighting back. Silencing our movement is exactly what they hope to accomplish with these targeted, politically motivated prosecutions. They can try to stop a few of us but they can never stop us all.

Thanks again for coming out.

Recommendations for the Hacktivist Community