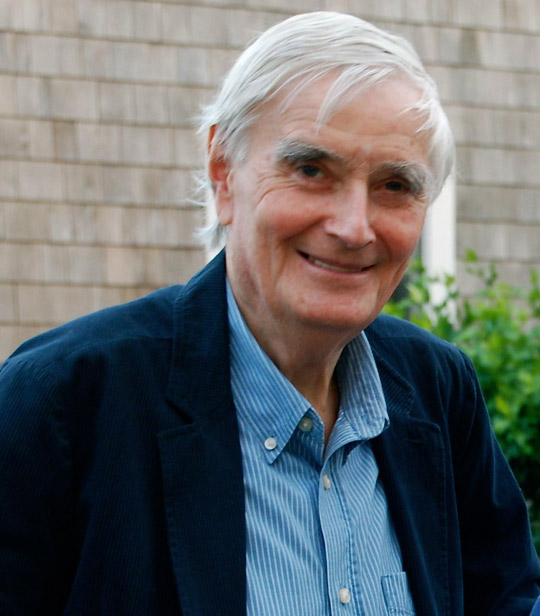 Budd Hopkins has long been considered ufology’s most visible figure. He pioneered and continues to lead the investigation into the most controversial aspect of the UFO phenomenon-the systematic abduction of human beings by UFO occupants. As the world’s premier expert on this issue, he has worked with more than one thousand people who have reported abduction experiences over the past twenty years. These individuals come from all walks of life and include physicians, psychiatrists, attorneys, police officers, military personnel, political figures, personalities from the entertainment world, and even a NASA scientist.

It has been known amongst his friends that alien abduction pioneer, Budd Hopkins, has been of ill health. Unfortunately, we recently received a note that Budd passed away Sunday. Here is the message from Leslie Kean:

I’m very sad to announce that Budd Hopkins died today, August 21, at 1:35 pm. Budd had been under hospice care for about three weeks, at his home in New York. The combination of liver cancer and pneumonia led to his death. His daughter Grace Hopkins-Lisle and I were with him almost continuously during these past weeks. He was not in any pain throughout any of the process, and he received the best possible care and loving support from those closest to him. Today he gradually slipped away, and simply quietly stopped breathing. He died peacefully and without any struggle, with Grace, Grace’s husband Andrew, and me by his side.

Thanks to all of you for being such strong supporters of this extraordinary man, who has contributed so much to our lives, in so many different ways.

Open Minds’ Antonio Huneeus has retrieved a number of great original photographs from his archives of Budd throughout his career. We post them here in memory of a colleague and friend. 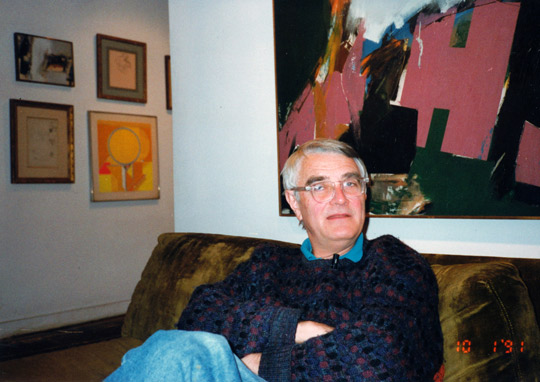 You can find an excerpt from Budd’s latest book, Art, Life and UFOs: A memoir by Budd Hopkins, in our August/September 2010 issue.

Here are a couple of biographies on Budd, this first one is from the Intruders Foundation, a nonprofit organization founded by Budd to help those experiencing alien abduction and to educate the public on the phenomenon.

Budd Hopkins is a world-renowned artist, author, and pioneer UFO abduction researcher. Having investigated well over 700 cases, he now heads the Intruders Foundation, a nonprofit, scientific research and support organization. Budd first became interested in the UFO phenomenon when he and two others had a daylight UFO sighting near Truro, Massachusetts, in 1964. In 1975 he carried out his first major investigation which involved a UFO landing and occupant incident in North Hudson Park, NJ. Shortly thereafter, he began to concentrate on the investigation of the UFO abduction phenomenon, which led to the eventual publication of his findings. Taken together, his three books, Missing Time, 1981, Intruders, 1987, and Witnessed, 1996, are widely regarded by researchers and skeptics alike as comprising the most influential series of books yet published on the abduction phenomenon. These works, Hopkins’ lectures, and his other presentations have been responsible for bringing a number of other noted researchers-David Jacobs, John Carpenter, Yvonne Smith, and John Mack, among others-into this extraordinary area of specialization. His documented discoveries have become the basis of most later abduction investigations and research. 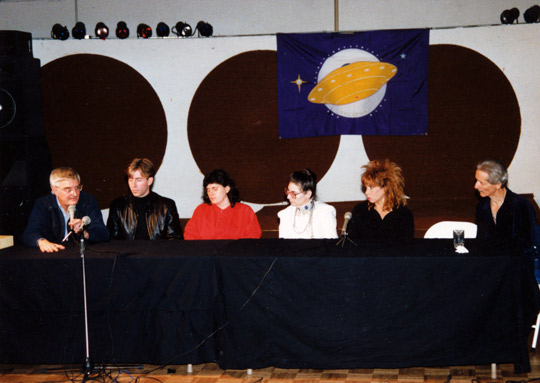 Budd Hopkins (left) in an abductee panel at a conference in NY in 1988. (image credit: Antonio Huneeus)

Budd Hopkins has long been considered ufology’s most visible figure. He pioneered and continues to lead the investigation into the most controversial aspect of the UFO phenomenon-the systematic abduction of human beings by UFO occupants. As the world’s premier expert on this issue, he has worked with more than one thousand people who have reported abduction experiences over the past twenty years. These individuals come from all walks of life and include physicians, psychiatrists, attorneys, police officers, military personnel, political figures, personalities from the entertainment world, and even a NASA scientist.

A prolific writer and internationally respected painter, Hopkins has delivered hundreds of UFO lectures around this country and around the world. His groundbreaking first book, Missing Time, was the first work to compare a number of UFO abduction cases in order to isolate the patterns they revealed. His second book, Intruders-The Incredible Visitation at Copley Woods, was a New York Times bestseller and the basis for the popular 1992 CBS miniseries, Intruders, which has since been broadcast internationally. His widely acclaimed latest book is Witnessed-The True Story of the Brooklyn Bridge UFO Abductions.

Hopkins’ goal has always been to bring an objective, dispassionate scientific intelligence to bear on the UFO abduction phenomenon. To this end, he founded the Intruders Foundation (IF) in 1989. IF is a nonprofit organization devoted to research and public education concerning this extraordinary enigma. They publish a respected journal, as well as offer a nationwide referral service for those wishing to explore their own suspected abduction experiences. 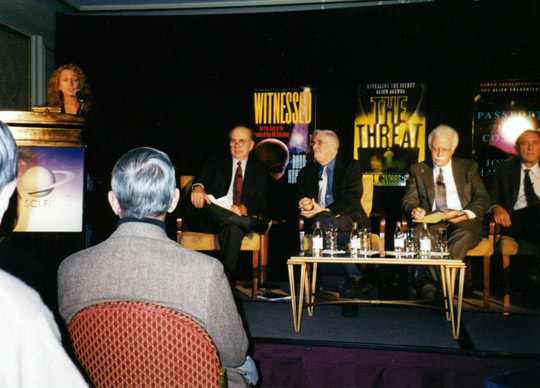 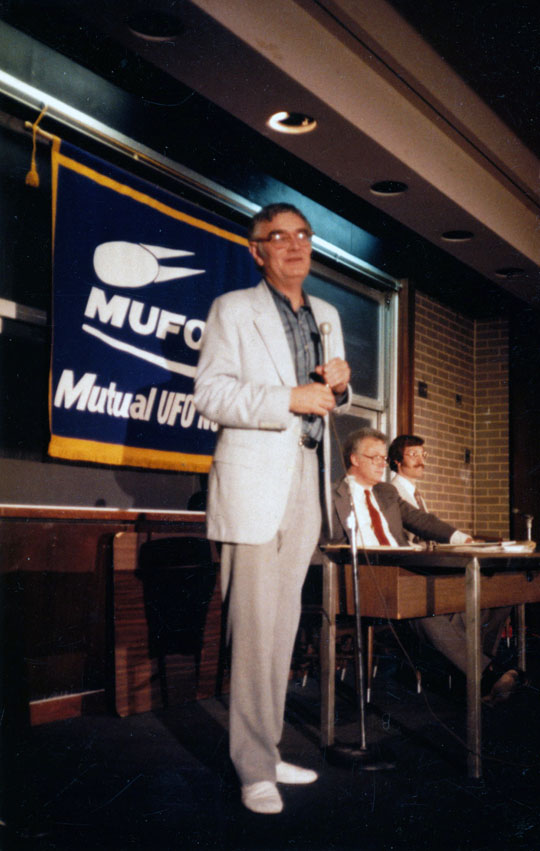 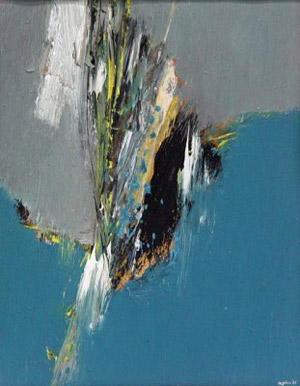 Budd Hopkins was born in Wheeling, West Virginia in 1931.  He graduated from Linsly Military Institute (now Linsly School) in 1949 and Oberlin College in 1953.  He first displayed artistic abilities when, as a child recovering from a long-term illness, he began to create sculptures of ships made out of modeling clay.  But it wasn’t until he arrived at Oberlin that Budd Hopkins made a serious study of art.

He settled in New York after obtaining his degree and has had a residence there ever since.  Budd Hopkins and his wife, April Kingsley, and their daughter, Grace, divided their time between their homes in Cape Cod, MA and New York City.

In 1963, Budd Hopkins was selected by the Columbia Broadcasting System as one of the 15 painters featured in the network’s first television special on American art.  In 1958, Art News picked Budd Hopkins as one of 12 Americans for exhibition in the “Festival of Two Worlds” in Spoleto, Italy.

The artist’s brilliance has won him a number of fellowships and awards.  In 1972, Budd Hopkins was awarded the Commission Prize by the West Virginia Arts and Humanities Council.  In 1976, he received the John Simon Guggenheim Fellowship for Painting and in 1979 he received a fellowship from the National Endowment of the Arts.  In 1982, Budd Hopkins won a special project grant from the New York State Council on the Arts.  Also, in 1992 this native son of Wheeling, West Virginia was inducted into the Wheeling Hall of Fame.

According to Budd Hopkins, “My paintings and sculptures, at first glance, may appear to be purely aesthetic; closer up, they are not.  They hold a feeling of tentativeness, combined with a sense of arrival.”

During his career, the artist has won wide acclaim in the field of abstract art.  Budd Hopkins has established an international reputation as an artist and sculptor.  His work is on display in many of the most prestigious art galleries and museums, not only in the United States, but in Europe as well.  Budd Hopkins artwork has been exhibited in England, Finland, Italy and Switzerland.

The artist’s work has appeared in many exhibitions across the country and he is represented in many important private and corporate collections around the nation.  Budd Hopkins paintings and sculpture have been featured in the Brooklyn Museum, Bronx Museum of Art, Corcoran Gallery, Guggenheim Museum, Metropolitan Museum of Art, Museum of Modern Art, Queens Museum, Public Library of New York and Whitney Museum.

Across the United States, Budd Hopkins’ art has been seen in the Smithsonian Institution and the Library of Congress in Washington, DC; the Houston Museum of Fine Arts, the Philadelphia Museum of Art and the San Francisco Museum, among others.  In addition, Universities and Colleges which have shown Budd Hopkins paintings and sculpture include his alma mater Oberlin, Princeton, Yale, Denison, Drew, Massachusetts Institute of Technology (MIT), DePauw, Williams, Brandeis, Middlebury, North Carolina, Michigan State, Reed, Bradford, Connecticut, Alabama, Bennington and the City College of New York.

Recently, Budd Hopkins has been recognized for his research into the matter of UFO’s and one of his books, “The Intruders”, printed by Random House, was on the New York Times best-seller list and was the basis for a television show on CBS.

Scientists claim the discovery of a mummified alien in Peru