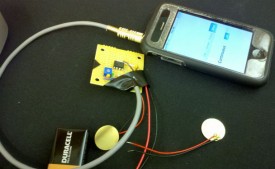 NEW YORK, NY — Brian Amento gripped the deadbolted door handle on the display next to him and with a click, the door unlocked at his touch. In his other hand, he was pinching a small metal disk called a piezoelectric transducer — like the ones used in guitar pickups — that was wired to his smartphone. The phone sent a digital key, identifying Amento as the homeowner, through his body and into the door.

Amento is a computer scientist at AT&T Labs. He talked with InnovationNewsDaily Thursday at a research fair AT&T held for reporters. Though for this display, the piezoelectric transducer connected to Amento’s phone with a large wire, eventually such sensors would be embedded directly in phones or perhaps wristwatches, Amento said. People’s smartphones would become their door keys, too.

In this prototype, Amento’s phone produced several frequencies of vibrations that humans can’t feel, but can hear, if the room is very quiet. In other words, as Amento said, “It’s an acoustic signal.”

The frequencies travel from the phone and through the skeleton, in the way that sound waves vibrate bones in the skull and inner ear. At the other end, the door handle has another piezoelectric transducer to detect the vibrations coming through a person’s hand. If this technology comes to market, different phones and door handles would have different vibration signatures that need to match for the door to unlock.

Amento switched the settings on his phone, demonstrating that his demo door would also open for the vibrations from a friend’s phone. On the other hand, it would send an alert to the homeowner if a stranger touched the door handle.

Amento and his colleagues think they can add another layer of security to the smartphone key, too — one that’s based on the unique properties of people’s skeletons. Because of differences in bone lengths and density, people’s skeletons should carry vibrations differently, they think. “If the signal goes through my body, it degrades in a different way than if it goes through your body,” Amento said. Among the five people he has tested, all of their skeletons transmitted vibrations differently. Of course, he’ll have to test more people to check if everyone is unique, but if that’s true, then the smartphone key will only work when the right person is using it.

The key is still in its prototype stage, Amento said, so he couldn’t say when people might be able to unlock their front doors with their own unique cellphone vibes. Once such systems work, however, people could start transmitting much more than their door keys through their bones. Amento and his colleagues are also working to see if people can exchange contact information just by shaking hands. The data would flow from one phone, through one person’s skeleton, into the next person’s and finally, into the recipient’s phone.