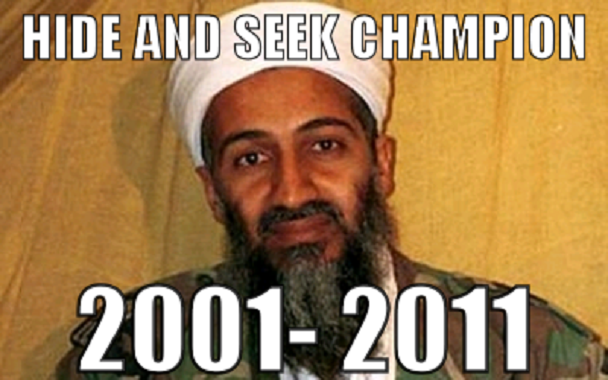 The “Bin Laden” hoax is consuming our time and energy even as the global corporate-financier oligarchs flee forward cashing in on the political capital they presume they have gained by making this announcement. Even a superficial examination of mainstream media’s headlines and interviews with the CIA director himself calls into question the official narrative with mind numbing contradictions and faulty logic even a child could spot.
The CIA itself is only 95% sure, based on facial recognition, that they bagged their rogue agent. A London Guardian report compounds this uncertainty stating that the CIA compared the alleged DNA of this man they claim to have shot dead in Pakistan, not with a previous sample from Osama Bin Laden, but against a Bin Laden family member. If we are to believe any of this at all, the CIA is not even saying they are 100% sure, so why should we be?

“We were never really certain about whether or not Bin Laden was there.”
Stripping further credibility away, was CIA Director Leon Panetta’s interview on PBS where he begins by saying the CIA had no evidence and were entirely uncertain Osama Bin Laden was even in the compound to begin with. According to a Washington Post article, the CIA claims to have had a nearby safe house from which they observed the alleged compound for months. They also confirm that not a single photo or shred of evidence was revealed throughout the course of this lengthy surveillance mission that the elusive, bearded mastermind was present.

But debating the minutiae is self-defeating. Bin Laden has been long dead, according to a myriad of government officials both in America and abroad. We must look at how this stunt is being exploited at home and abroad, rhetorically and geopolitically.
Domestically
It has become an opportunity at home to criticize all who question government statements and further punish those in Western society who still take their responsibility of holding their government accountable seriously. Perhaps the most ridiculous examples can be gleaned from the Pittsburgh Post Gazette article penned by Reg Henry titled, “It’s time for conspiracy theorists to shut up,” where he postulates anyone questioning the “95%” certainty of the CIA is a “lunatic.”
Despite the Jessica Lynch story being completely fabricated, Henry believes her injury and her signing up for service still makes her a hero. He also believes that Pat Tillman is likewise a hero simply for serving, despite being murdered by his own government who then treacherously covered it up. He omits the fact that Tillman had become critical of the war and his true heroism was for standing up against a system willing to murder its own to perpetuate its malicious agenda. Henry might want to read Pat Tillman’s brother’s rebuttal.

How a real American responds to official government statements: Cindy
Sheehan nails government lies and the propagandists who peddle them to
the wall with healthy skepticism and independent, critical thinking.

This attack on those who question the official narrative coming from a known lying, murderous government is not confined to America’s shores. Jim Corr of “The Corrs” fame has been a long-time outspoken critic of the emerging global government and in particular the glaring inconsistencies behind the September 11, 2001 attacks on the World Trade Center. This vigilance and skepticism has cost him a heavy price, as he faces a constant, unending barrage by pundits like Reg Henry and his counterparts overseas.

Just one of many media barrages unleashed on Jim Corr of Ireland to undermine him personally, and the message of truth he carries.
Most recently he was attacked by the Irish Daily Mirror which stated, “I call it Jim Corr Syndrome and it seems to be contaminating more and more people. It occurs when something big happens and ordinary folk believe the craziest conspiracy story rather than accept the plain truth.  Bin Laden is dead. He was shot during a raid by US special forces. End of story. I’m inclined to believe President Obama on this one but Jim doesn’t and he’s not alone out there. Ironically it’s right-wing Christians who are clambering for evidence of bin Laden’s death. So much for faith.”
www.youtube.com/watch?v=seU4xsz9vsY&feature=player_embedded

Declan O’Shea of Infowars Ireland breaks down the latest attack on Jim Corr and the absolute absurdity surrounding the recent “Bin Laden” hoax.
Apparently the author, Mr. Pat Flanagan, is also unaware of even the official narrative and how tenuously it stands. He also seems to insist that we should simply have “faith” in our government, a statement that surely sent many brave Irish men who fought for Ireland’s freedom over the centuries, spinning in their graves. Such an attitude has invited some of the darkest chapters in human history. Telling people to “shut up” and have “faith,” are the very hallmarks of a fascist society, and we already see amidst this atmosphere of “shut up” the concurrent expansion of an ever increasing, omnipresent police-state. Will we be told next by Henry and Flanagan that having armed paramilitary guards standing on every street corner like Castro’s Cuba is indicative of freedom?
Geopolitically
The most alarming aspect of this entire “Bin Laden” hoax is its geopolitical implications. While people argue over the minutia of the shoddy government narrative and question the patriotism of skeptics, the alleged killing of Bin Laden in the middle of Pakistan’s intelligence and military community has increased tensions between Washington, Islamabad, and perhaps unnoticed by the likes of Reg Henry and Pat Flanagan, Beijing as well. In fact, a flurry of mainstream media stories covered China’s awareness that this stunt is designed to give America an excuse to enter into Pakistan and thus directly confront China who has an established and growing presence in the region.
AlJazeera’s article, “After Osama, China fears the next target,” indicates that the Chinese are well aware America’s foreign policy to “spread democracy” is in actuality an attempt to contain the rise of China and other emerging economies. While pundits in the West maintain such claims are the makings of “tinfoil hat” conspiracies, a nation of 1.3 billion is mobilizing to confront this very real threat.
The skeptical who might be tempted to accuse China’s leadership of unwarranted “tinfoil hat” paranoia might want to consult the the 2006 Strategic Studies Institute’s report “String of Pearls: Meeting the Challenge of China’s Rising Power across the Asian Littoral.” Throughout the report, China’s efforts to secure its oil lifeline from the Middle East to its shores in the South China Sea are examined as are means to maintain American hegemony throughout the Indian and Pacific Ocean. The premise is that, should Western policy wonks and paper-pushers fail to entice China into participating in the “international system” as “responsible stakeholders,” an increasingly confrontational posture must be taken to contain the rising nation.

Dr. Webster Tarpley breaks down on Press TV the greater implications
of the “Bin Laden” hoax, including the threat of general world war. Part II
can be found here. All three interviewees make valid, cogent points.
Considering the current standoff brewing in Pakistan, where we see a convergence of Iranian, Indian, American, Chinese, and Pakistani interests, punctuated by provocative drone attacks just hours after Pakistan warned America over violating its airspace, it is quite clear “confrontation” has become the order of the day. The disposal of “Bin Laden” or at least his politically convenient ghost, signals not a drawing down of America’s global war, but a deep breath being taken before the final plunge into confrontation with Pakistan, China, and Russia.
The dangers are very real. We must not back down from our innate rights to hold our government accountable for the statements it makes regarding the actions it is increasingly unilaterally taking. We must call out those who tell us to “shut up” and “have faith” and remind them that it is not only our right, but our duty to “speak up” and scrutinize everything our government says and does. We must reach out and remind them of the danger servile obedience invites, and the horrifying historical examples that exhibit the results from such a cowardly stance. We are literally being penned in, rallied around the flag, and mobilized for a greater, impending confrontation, of that there is no doubt.
To contact Mr. Reg Henry of the Pittsburgh Post Gazette and INTELLIGENTLY remind him of his duty as an American, he can be reached at, [email protected] .
Mr. Pat Flanagan can also be INTELLIGENTLY reminded of his duty as a journalist to objectively examine the evidence before conducting a campaign of degradation against those exercising their rights and duty to call into question their government at, [email protected] .
Tony Cartalucci’s articles have appeared on many alternative media websites, including his own at
Land Destroyer Report.