When Secret Sats Spy on Us, Monsieur Legault Spies Back 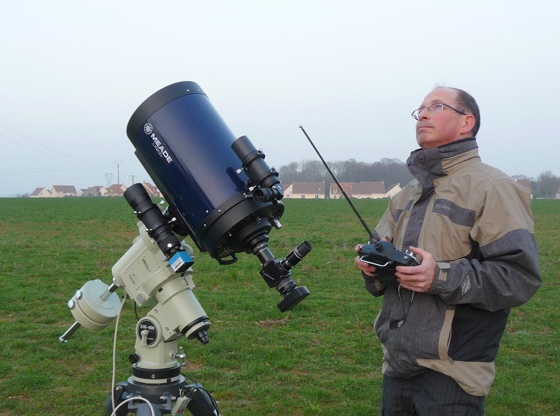 From mysterious robotic space planes to giant spy satellites the size of school buses, space is teeming with secret American hardware meant to gaze down on insurgents, terrorists and, well, everybody on the third rock from the sun.

For mere proles like you and me, it can be hard to get a straight answer from the Air Force, NASA and other space-faring agencies about precisely what is up there, what it’s doing and where exactly it all is at a given moment.

Now a pair of enterprising Frenchmen have decided to answer at least one of those questions for themselves, using a modified consumer-grade telescope, a small motor, a hand-held controller and a video camera. The result is a do-it-yourself satellite tracker capable of recording the movements of America’s most secretive spacecraft.

Two years into their little science project, Thierry Legault and Emmanuel Rietsch have managed to record the International Space Station, the X-37B space plane and the Keyhole and Lacrosse spy satellites, the kind probably used to peer into Osama bin Laden’s Pakistan compound.

“In mid-2009, I have decided to adapt my Takahashi EM400 [telescope mount] for motorized satellite-tracking,” Legault, pictured above, wrote on his website. He fitted a Meade Schmidt-Cassegrain 10-inch telescope to the mount and teamed up with Rietsch to design a system for slowly and precisely rotating the mount to follow a distant, orbital object.

“More tricky than expected” is how Legault described the creation of the custom rotation system, which attaches a motor to the mount and, in the beginning, used a radio joystick for controlling the motor. Apparently cued by the global network of amateur satellite spotters, profiled by Wired in 2006, Legault would hunt for orbital objects using the telescope, switch on the video camera, and then use the joystick to keep the targeted spacecraft in the frame.

But there was a problem. “Despite this performing tracking system and hours of training on airplanes passing in the sky, keeping the spaceship inside a sensor of a few millimeters at a focal length of 5000mm and a speed over 1°/s needs a lot of concentration and training,” Legault wrote.

So last year Rietsch devised a new computer program, called Videos Sky, to move the telescope automatically. Now Legault uses a second telescope to “scout” for spacecraft, gets the 10-incher into place, peering at a spot the satellite is on course to pass through, and activates the computerized tracker once the target is in view. Legault has helpfully uploaded a video depicting the whole tracking process, as seen by the main telescope.

Plus, what Legault and Rietsch are doing is legally aboveboard. The effort is actually no more illegal than standing on a public street and looking around really carefully. But considering how hard the intelligence community works to keep details of its space arsenal under wraps, it’s not hard to imagine the two Frenchmen have pissed off a lot of spooks unaccustomed to having regular people spy back.