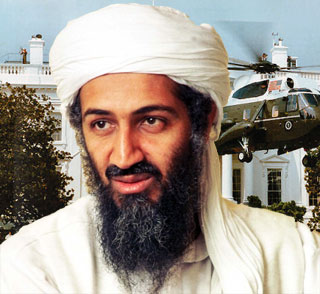 Conservative commentator, former Marine Colonel Bob Pappas has been saying for years that bin Laden died at Tora Bora and that Senator Kerry’s claim that bin Laden escaped with Bush help was a lie.  Now we know that Pappas was correct.  The embarrassment of having Secretary of State Clinton talk about bin Laden in Pakistan was horrific.  He has been dead since December 13, 2001 and now, finally, everyone, Obama, McChrystal, Cheney, everyone who isn’t nuts is finally saying what they have known for years.

However, since we lost a couple of hundred of our top special operations forces hunting for bin Laden after we knew he was dead, is someone going to answer for this with some jail time?  Since we spent 200 million dollars on “special ops” looking for someone we knew was dead, who is going to jail for that?  Since Bush, Rumsfeld and Cheney continually talked about a man they knew was dead, now known to be for reasons of POLITICAL nature, who is going to jail for that?  Why were tapes brought out, now known to be forged, as legitimate intelligence to sway the disputed 2004 election in the US?  This is a criminal act if there ever was one.

America knew Osama bin Laden died December 13, 2001.  After that, his use was hardly one to unite America but rather one to divide, scam and play games.  With bin Laden gone, we could have started legitimate nation building in Afghanistan instead of the eternal insurgency that we invented ourselves.

Without our ill informed policies, we could have had a brought diplomatic solution in 2002 in Afghanistan, the one we are ignoring now, and spent money rebuilding the country, 5 cents on the dollar compared to what we are spending fighting a war against an enemy we ourselves recruited thru ignorance.

The bin Laden scam is one of the most shameful acts ever perpetrated against the American people.  We don’t even know if he really was an enemy, certainly he was never the person that Bush and Cheney said.  In fact, the Bush and bin Laden families were always close friends and had been for many years.

What kind of man was Osama bin Laden?  This one time American ally against Russia, son of a wealthy Saudi family, went to Afghanistan to help them fight for their freedom.  America saw him as a great hero then.  Transcripts of the real bin Laden show him to be much more moderate than we claim, angry at Israel and the US government but showing no anger toward Americans and never making the kind of theats claimed.  All of this is public record for any with the will to learn.

How much of America’s tragedy is tied with these two children of the rich, children of families long joined thru money and friendship, the Bush and bin Laden clans.

One son died in remote mountains, another lives in a Dallas suburb hoping nobody is sent after him.  One is a combat veteran, one never took a strong stand unless done from safety and comfort.  Islam once saw bin Laden as a great leader.  Now he is mostly forgotten.

What has America decided about Bush?

We know this:  Bin Laden always denied any ties to 9/11 and, in fact, has never been charged in relation to 9/11.  He not only denied involvement, but had done so, while alive, 4 times and had vigorously condemned those who were involved in the attack.

This is on the public record, public in every free country except ours.  We, instead, showed films made by paid actors, made up to look somewhat similar to bin Laden, actors who contradicted bin Ladens very public statements, actors pretending to be bin Laden long after bin Laden’s death.

These were done to help justify spending, repressive laws, torture and simple thievery.

For years, we attacked the government of Pakistan for not hunting down someone everyone knew was dead.  Bin Laden’s death hit the newspapers in Pakistan on December 15, 2001.  How do you think our ally felt when they were continually berated for failing to hunt down and turn over someone who didn’t exist?

What do you think this did for American credibility in Pakistan and thru the Islamic world?  Were we seen as criminals, liars or simply fools?  Which one is best?

This is also treason.

How does the death of bin Laden and the defeat and dismemberment of Al Qaeda impact the intelligence assessments, partially based on, not only bin Laden but Al Qaeda activity in Iraq that,not only never happened but was now known to have been unable to happen?

How many “Pentagon Pundits,” the retired officers who sold their honor to send us to war for what is now known to be domestic political dirty tricks and not national security are culpable in these crimes?

I don’t always agree with Col. Pappas on things.  I believe his politics overrule his judgement at times.  However, we totally agree on bin Laden, simply disagree with what it means.  To me lying and sending men to their deaths based on lies is treason.

Falsifying military intelligence and spending billions on unnecessary military operations for political reasons is an abomination.  Consider this, giving billions in contracts to GOP friends who fill campaign coffers, and doing so based on falsified intelligence is insane.  This was done for years.

We spent 8 years chasing a dead man, spending billions, sending FBI agents, the CIA, Navy Seals, Marine Force Recon, Special Forces, many to their deaths, as part of a political campaign to justify running American into debt, enriching a pack of political cronies and war profiteers and to puff up a pack of Pentagon peacocks and their White house draft dodging bosses.

How many laws were pushed thru because of a dead man?

How many hundreds were tortured to find a dead man?

How many hundreds died looking for a dead man?

How many billions were spent looking for a dead man?

Every time Bush, Cheney and Rumsfeld stood before troops and talked about hunting down the dead bin Laden, it was a dishonor.  Lying to men and women who put their lives on the line is not a joke.

Who is going to answer to the families of those who died for the politics and profit tied to the Hunt for Bin Laden?