A Quick History: Illuminati, Nazis and the Illegal State of Israel 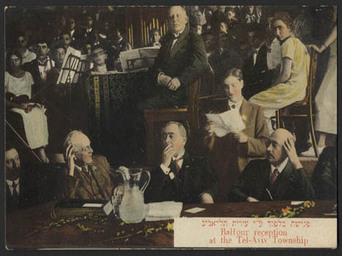 If we wish to end the Israeli/Palestinian conflict, we need to know who created Israel and why.

In 1917 British Foreign Secretary Arthur Balfour penned a letter to Zionist Second Lord Lionel Walter Rothschild in which he expressed support for a Jewish homeland on Palestinian-controlled lands in the Middle East.

This Balfour Declaration justified the brutal seizure of Palestinian lands for the post-WWII establishment of Israel.

Israel would serve, not as some high-minded “Jewish homeland”, but as lynchpin in Rothschild/Eight Families control over the world’s oil supply.

Baron Edmond de Rothschild built the first oil pipeline from the Red Sea to the Mediterranean to bring BP Iranian oil to Israel.  He founded Israeli General Bank and Paz Oil and is considered the father of modern Israel.

The Rothschilds are the planet’s wealthiest clan, worth an estimated $100 trillion.  They control Royal Dutch/Shell, BP, Anglo-American, BHP Billiton, Rio Tinto, Bank of America and scores of other global corporations and banks.

They are the largest shareholders in the Bank of England, the Federal Reserve and most every private central bank in the world.  They needed a footprint in the Middle East to protect their new oil concessions, which they procured through Four Horsemen fronts like the Iranian Consortium, Iraqi Petroleum Company and Saudi ARAMCO.

Rothschild’s Shell and BP formed these cartels with the Rockefeller half of the Four Horsemen- Exxon Mobil and Chevron Texaco.  This new alliance required a “special relationship” between Great Britain and the US, which still exists today.

Rothschild and other wealthy European shareholders could now utilize the United States military as a Hessianized mercenary force, deployed to protect their oil interests and paid for by US taxpayers.

Israel would serve the same purpose in closer proximity to the oilfields.  The Israeli Mossad is less a national intelligence agency than it is a Rothschild/Rockefeller family security force.

The Rothschilds exert political control through the secretive Business Roundtable, which they created in 1909 with the help of Lord Alfred Milner and Cecil Rhodes- whose Rhodes Scholarship is granted by Cambridge University, out of which oil industry propagandist Cambridge Energy Research Associates operates. Rhodes founded De Beers and Standard Chartered Bank.

The Roundtable takes its name from the legendary knight King Arthur, whose tale of the Holy Grail is synonymous with the Illuminati notion that the Eight Families possess Sangreal or holy blood- a justification for their lording over the people and resources of the planet.

According to former British Intelligence officer John Coleman, who wrote Committee of 300, “Round Tablers armed with immense wealth from gold, diamond and drug monopolies fanned out throughout the world to take control of fiscal and monetary policies and political leadership in all countries where they operated.”

Rhodes and Oppenheimer deployed to South Africa to launch the Anglo-American conglomerate.  Kuhn and Loeb were off to re-colonize America with Morgan and Rockefeller.

Rudyard Kipling was sent to India.  Schiff and Warburg manhandled Russia.  Rothschild, Lazard and Israel Moses Seif pushed into the Middle East.  At Princeton, the Round Table founded the Institute for Advanced Study (IAS) as partner to its All Souls College at Oxford.

In 1919 Rothschild’s Business Roundtable spawned the Royal Institute of International Affairs (RIIA) in London.  The RIIA sponsored sister organizations around the globe, including the US Council on Foreign Relations.  The RIIA is a registered charity of the Queen and, according to its annual reports, is funded largely by the Four Horsemen.

Former British Foreign Secretary and Kissinger Associates co-founder Lord Carrington is president of both the RIIA and the Bilderbergers.  The inner circle at RIIA is dominated by Knights of St. John Jerusalem, Knights of Malta, Knights Templar and 33rd Degree Scottish Rite Freemasons.

The Knights of St. John were founded in 1070 and answer directly to the British House of Windsor.  Their leading bloodline is the Villiers dynasty, which the Hong Kong Matheson family- owners of the HSBC opium laundry- married into. The Lytton family also married into the Villiers gang.

Colonel Edward Bulwer-Lytton led the English Rosicrucian secret society, which Shakespeare opaquely referred to as Rosencranz, while the Freemasons were symbolized by Guildenstern.

Lytton was spiritual father of both the RIIA and Nazi fascism.  In 1871 he penned a novel titled, Vril: The Power of the Coming Race.  Seventy years later the Vril Society received ample mention in Adolf Hitler’s Mein Kampf.

Lytton’s son became Viceroy to India in 1876 just before opium production spiked in that country.  His good friend Rudyard Kipling introduced the swastika to India and later worked under Lord Beaverbrook as Propaganda Minister, alongside Sir Charles Hambro of the Hambros banking dynasty.

Children of the Roundtable elite are members of a Dionysian cult known as Children of the Sun.  Initiates include Aldous Huxley, T. S. Eliot, D. H. Lawrence and H. G. Wells.  Wells headed British intelligence during WWI.  His books speak of a “one-world brain” and “a police of the mind”.

William Butler Yeats, another Sun member, was a pal of Aleister Crowley.  The two formed an Isis Cult based on a Madam Blavatsky manuscript, which called on the British aristocracy to organize itself into an Aryan priesthood.  Blavatsky’s Theosophical Society and Bulwer-Lytton’s Rosicrucians joined forces to form the Thule Society, out of which the Nazis emerged.

The WWI Veteran in the Crowd – Adolf Hitler

In 1933 at the home of banker Baron Kurt von Schroeder, a deal was cut to bring Hitler to power.  Attending the meeting were brothers John Foster and Allen Dulles- Rockefeller cousins and partners at law firm Sullivan & Cromwell, which represented Schroeder Bank.

Schroeder, managing director T. C. Tiarks, was a director at the Rothschild-controlled Bank of England.  In the spring of 1934 Bank of England Chairman Montagu Norman convened a meeting of London bankers who decided to covertly fund Hitler.

Royal Dutch/Shell Chairman Sir Henri Deterding helped in this effort.  Even after the US went to war with Germany, Exxon Chairman Walter Teagle remained on the board of I. G. Chemical- the US I. G. Farben subsidiary.  Exxon was integral in supplying the Nazis with tetraethyl lead, an important component of aviation fuel.  Only Exxon, Du Pont and GM made the stuff.  Teagle also supplied the Japanese with his product.

Exxon and I. G. Farben were such close business associates that by 1942 Thurman Arnold – head of the US Justice Department’s Anti-Trust Division- produced documents that showed, “Standard and Farben in Germany had literally carved up the world markets, with oil and chemical monopolies established all over the map.”

Daddy Prescott Bush had his companies seized during WWI for ‘trading with the enemy’ – but managed to get all his money back after the war, which financed the Bush political dynasty.

In 1932 the conference was held in New York.  Hamburg-Amerika Shipping Line, owned by George Walker and Prescott Bush, brought the German contingent to the gene-fest.

One member of the German delegation was Dr. Ernst Rudin of the Kaiser Wilhelm Institute for Genealogy in Berlin.  He was unanimously elected president for his work in founding the German Society of Race Hygiene- a forerunner to Hitler’s race institutes.

As of 1998 there were still scores of lawsuits pending against Ford, Chase Manhattan, J.P. Morgan, Deutsche Bank, Allianz AG and several Swiss banks for their dealings with the Nazis.

At the heart of Hitler’s inner circle were the secret societies Germanordern (brothers of Yale’s Skull & Bones), the Thule Society, and Vril.  The concepts “Great Masters”, “Adepts” and the “Great White Brotherhood”, which the Nazis used to justify their idea of Aryan superiority, were ancient ideas carried forth from the Egyptian Mystery Schools by the Teutonic Knights, the Illuminati, and Hebrew Cabalists.

These same concepts can be found in today’s New Age Movement, whose New Age magazine was first published by the Grand Orient Masonic Lodge of Washington, DC.  Henry Kissinger was an early supporter.

Nazi occultists believed ancient German tribes were the true keepers of the Ancient Mysteries which had their origin in Atlantis, when seven races of God-men were introduced to Earth.  Thule was a Teutonic Atlantis believed by the Nazis to house these long-vanquished races, who lost their godly Annunaki powers by interbreeding with humans.

At the inner core of the Thule Society were Satanists who practiced black magic. Hitler was once described as a “child of Illuminism”.

Is it time to check Hitler’s DNA?

According to Dr. Walter Langer, who did a war-time psychoanalysis of Hitler for the CIA-predecessor OSS, Hitler was also a Rothschild.  Langer uncovered an Austrian police report proving Hitler’s father was an illegitimate son of a peasant cook named Maria Anna Schicklgruber, who at the time of her conception was a servant in the Vienna home of Baron Rothschild.

In May 1941 Rudolf Hess parachuted into the estate of the Duke of Hamilton, saying a supernatural force told him to negotiate with the British.  Hitler was ostensibly visited by this same apparition and suddenly turned vehemently against occultism.

He ordered a crackdown against Freemasons, Templars and the Theosophical Society.  Suddenly the international banker crowd pulled the plug on Hitler’s finances and began to denounce him.  Six months later the Hessianized US military entered WWII.

Hitler’s fate was no different than that of Saddam Hussein or Manuel Noriega.  The Illuminati bankers’ modus operandi is to use men of low integrity to do their dirty work, before conveniently discarding and distancing themselves from them.

The horrific Holocaust that ensued assured sympathy for the already-planned state of Israel.  Towards the end of WWII, the murderous Haganah and Stern Gangs were deployed by the Rothschild bankers to terrorize Palestinians and steal their land.  Jews who escaped Hitler’s gas chambers were those of means who bought into Zionism.

For a fee of $1,000 – lots of money at that time – these right-wingers bought passage to Israel and escaped the fate of the poor Jews, Serbs, communists and gypsies.  The whole bloody affair was a massive eugenics project.  It had more to do with culling the herd along class lines, than it did with ethnicity or religion.

The key to this historic puzzle is to understand that the Rothschild/Rockefeller sangreal international bankers supported both the rise of the Nazis and the creation of Israel.  None of this has anything to do with religion.  It has everything to do with oil, arms, drugs, money and power.

The Rothschilds say they are Jewish.  The Rockefellers claim to be Christian.  These are irrelevant smokescreens.  Any demagogue- who blames injustice a religion or race of people- is sadly misinformed.  Throughout history the Illuminati Satanists have sacrificed people of all race and religion to further their agenda of total planetary control.

Israel is not a “Jewish homeland”.  It is an oil monopoly lynchpin.  Its citizens are being put in harms way- used by the Four Horsemen and their Eight Families-owners as geopolitical pawns in an international resource grab.  No peaceful solution is possible until the stolen land is returned to its rightful Palestinian owners.

Dean Henderson is the author of four books: Big Oil & Their Bankers in the Persian Gulf: Four Horsemen, Eight Families & Their Global Intelligence, Narcotics & Terror Network, The Grateful Unrich: Revolution in 50 Countries, Das Kartell der Federal Reserve & Stickin’ it to the Matrix.  You can subscribe free to his weekly Left Hook column @ www.deanhenderson.wordpress.com

5 Reasons Why the US Domain Seizures Are Unconstitutional