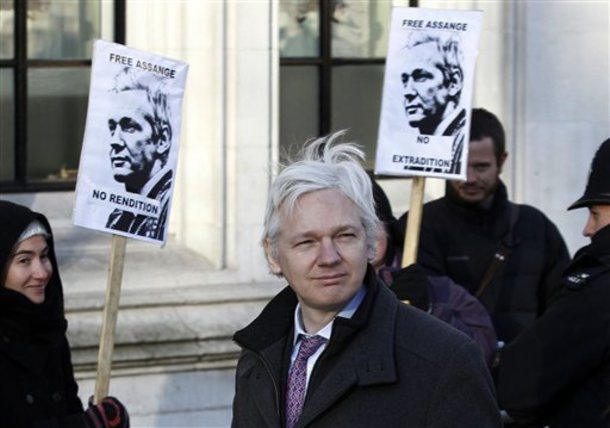 The text below is translated from the official Spanish transcript of today’s press statement issued by Ecuadorian Foreign Minister Ricardo Patiño Aroca, explaining Ecuador’s decision to grant asylum to Julian Assange. Here is a backup text in case Ecuadorian govt. website goes down : backup 1, backup 2.
This translation was crowd-sourced with the help of @DUVFree, BCK, BM, and other anonymous volunteers. Thanks for your contribution!

Note: links inserted in brackets have been added by WLPress for reference

Ecuadorian nationals show their support for Assange outside of the Embassy of Ecuador in London.

It also hopes to maintain unchanged the excellent ties of friendship and mutual respect which bind Ecuador and the United Kingdom and their people, as they are also engaged in promoting and defending the same principles and values, and because they share similar concerns about democracy, peace, and well being, which are only possible if the fundamental rights of everyone are respected.