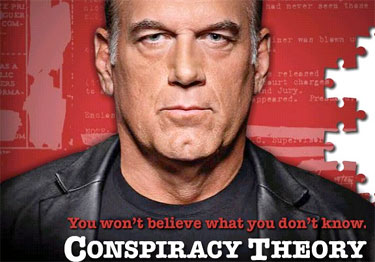 We urge you to watch the videos below because they might not be around for much longer. Jesse Ventura’s Conspiracy Theory show about the police state and FEMA camps, which TruTV never re-aired because of constant government harassment and pressure, has already been memory-holed and is now under threat of being removed from You Tube as well.

The show covers the takeover plan and what they don’t want you to see – how martial law is being implemented in America. Get these videos now and share them before they disappear forever.

During his last appearance on the Alex Jones Show, Jesse Ventura confirmed that TruTV was forced to pull the show from their schedule due to government threats.

Former Gov. Jesse Ventura and his crew at Conspiracy Theory have blown the FEMA camp issue wide open in a truly groundbreaking episode from the program’s second season on TruTV. The “Police State” episode proves once and for all that the feds have trained to take on American citizens, planned for riots and disasters and made preparations to maintain order at any cost. Tune in this Friday, Nov. 12 at 10 PM Eastern/ 9 PM Central and leave the denial at the door.

This powerful episode is the largest and most in-depth investigation into FEMA camps to date– and it is scheduled to air on television. Radio host and filmmaker Alex Jones returns to the series yet again, as the team takes you to confirmed on-the-ground facilities, confronts the legislators who authorized FEMA camps and breaks down the full-scale technologically-integrated police state that includes Fusion Centers, FEMA, the Department of Homeland Security and more.

Stock up for the Holidays with eFoodsDirect and get FREE Shipping! (Ad)

At one of many real and verified FEMA locations, Jesse Ventura and Alex Jones approach a “Residential Center” run by Homeland Security in central Texas where they find locked doors, double-fences and escape warnings around the entire perimeter. Further inside the facility, they witness a playground complex, swings and slides for children. The crew walks up to the front door and attempts to get some answers. But the officials refuse to either confirm or deny the facility’s purpose, including whether or not American citizens are being held inside. However, our past investigations into this facility reveal that it has confined both children and adults, including immigrants, refugee seekers and American citizens.