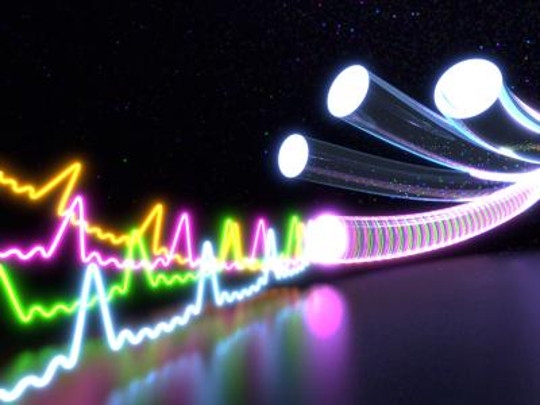 A mere cursory glimpse into the future foretells of a world in which the Internet has been integrated into almost every facet of our lives. However, the flood of smartphones, laptops, and “Internet of Things”-enabled devices in recent years has led it to expand at a rate far beyond the expectations of its original creators. With today’s generation of technology pushing the limits of current fiber optic capacity, in the next decade, radical new solutions to the “capacity crunch” are crucial to the sustained success of the web.

The domain of all things digital is evolving quickly, and tomorrow’s Internet promises to be in places it never was before: inside our appliances, in far-flung villages, even in space. While some of these needs are practical (“smart” healthcare devices, learning thermostats, rural WiFi) others are purely for amusement (Netflix, the introduction of Oculus Rift). All in all, coming changes to the constantly-expanding role of the net stand to make our world a much different place than it was just several years ago.

As much of the world races to improve Internet connection speeds, researchers are concerned that the fiber optic cables which form the physical backbone of the global Internet are reaching their peak capacity and may run out of bandwidth in as soon as five to eight years. According to UK scientists, the cables and fiber optics that deliver data to users will have reached their limit by 2023. No longer able to transmit information, this may trigger an Internet collapse of epic proportions. This is a massive problem, of course, especially taking into account the fact that much of the developing world still needs to be brought online, even as Western superpowers continue to demand greater bandwidth and faster Internet speeds.

This issue has made it to the mainstream, as doomsday predictions from scientists, physicists and engineers warning of a “full” Internet summoned the attention of all who depend on the web (for cat videos, or other perhaps more worthwhile pursuits). Until now, Internet providers have kept up with increased demand simply by sending more and more data down a single line of optic fiber. But now, the optical fibers have reached maximum capacity, and cannot transfer any additional information. Some of the world’s largest providers of fiber optic connections, such as VerizonFiOS, Google, and Microsoft, have recently worked to improve their networking infrastructure to keep up with our insatiable desire for faster, stronger Internet. However, this does not change the fact that computer-to-computer interactions are growing at an exponentially faster rate than anyone had predicted.

As reported by the media, there are several Internet initiatives afoot which may serve to mitigate this issue completely. Some of the biggest names in technology today have a stake in the race to develop better and faster forms of Internet delivery, implementing some wild schemes in an attempt to move beyond broadband. From Google’s Loons to Elon Musk’s lofty plan for individual Internet satellites, some plans are perhaps less “grounded” in reality than others. However, the key to fighting capacity crunch might already be beneath our feet.

“Dark fiber” is a term used to refer to networks of unlit optical cable infrastructure, laid down and left unused during the dotcom era. In the city of San Francisco alone, over 110 miles of fiber optic cable run underground. Only a fraction of that fiber network is currently being put to use. Right now, networks of dark-fiber primarily serve corporate entities, in high-density urban centers. But experts say that putting them to use residential communities wouldn’t be tough.

Robert Steele, former intelligence officer with the CIA, has proposed another idea to solve this problem: open source everything. As the growth of online media consumption – through streaming sites such as Netflix and Youtube – promises to further skyrocket in years ahead, his solution may make the most sense.

Steele spoke on the matter, saying:

“Sharing, not secrecy, is the means by which we realise such a lofty destiny as well as create infinite wealth. The wealth of networks, the wealth of knowledge, revolutionary wealth – all can create a nonzero win-win Earth that works for one hundred percent of humanity. This is the ‘utopia’ that Buckminster Fuller foresaw, now within our reach.”

Does reaching the end of the current optical fiber limit mean an Internet apocalypse will occur within our lifetimes? Personally, I’m optimistic that engineers will soon ameliorate the problem and clean up the mess – hopefully before I have to cancel my Netflix subscription.