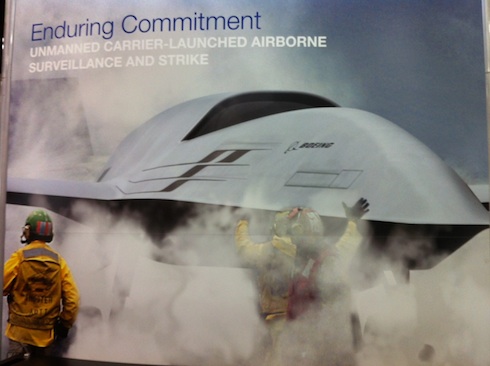 SAINT LOUIS, Mo. — Boeing is getting “very close  to having what we’d say is a very capable design” to pitch for the Navy’s Unmanned Carrier-launched Airborne Surveillance and Strike (UCLASS) program, Chris Chadwick, president of the company’s military aircraft division told DT at  Boeing’s Saint Louis, Mo., facilities yesterday. While he wouldn’t reveal much about the company’s UCLASS design, he did say that it definitely isn’t “a warmed-over X-45.”

The X-45, which has evolved into the Phantom Ray, was Boeing’s unsuccessful bid for the Navy’s Unmanned Combat Air Vehicle Demonstrator (UCAS-D) program that is using Northrop Grumman’s X-47B to test out how to conduct carrier ops with a large, stealthy UAV.

UCLASS is the Navy’s effort to field a fighter-size, stealthy drone capable of flying long distances to spy on and attack enemies by 2018. The Sea service considers it a follow-on effort to the UCAS-D program.

A couple months ago, we showed you the drawing of a mysterious aircraft (shown above) depicting what Boeing officials said was merely a concept image for UCLASS, not a final design, and that the company was still evaluating a half dozen or so different designs that it could pitch for the effort.

Chadwick said he isn’t concerned about Northrop having an advantage over Boeing in the UCLASS program, saying that all competitors into the contest will have access to the information learned from the UCAS-D program.

Northrop is likely to offer a version of its X-47B for the UCLASS contest while General Atomics is offering a version of its Predator C Avenger, called the Sea Avenger, that’s equipped to handle the strains of catapult launches and arrested landings as well as the salty sea air and Lockheed is apparently going to bid with a yet-to-be revealed design.