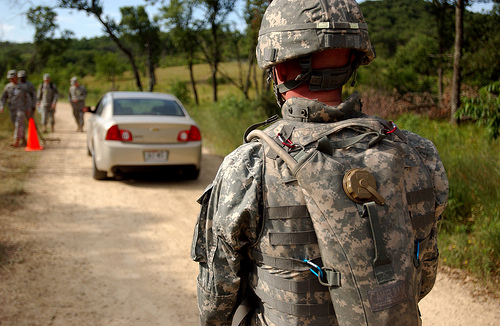 The revelation that Halliburton subsidiary KBR is seeking sub-contractors to staff and outfit “emergency environment” camps located in five regions of the United States follows preparations over the last three years to deal with riots inside the United States that have already spread throughout Europe, North Africa and the Middle East.

As Infowars reported last night, a document sent to us by a state government employee confirms that Kellogg Brown & Root Services are looking to activate camps built for FEMA and the U.S. Army Corps of Engineers across the United States.

This follows the Senate’s passage of Section 1031 of the National Defense Authorization Act which allows American citizens to be snatched off the street and held in detention camps without trial.

In 2006, KBR was contracted by Homeland Security to build detention centers designed to deal with “an emergency influx of immigrants into the U.S,” or the rapid development of unspecified “new programs” that would require large numbers of people to be interned.

Since 2006, the world has been beset by riots and civil unrest as a result of the fallout from the economic collapse. From the United Kingdom, to continental Europe, to the Middle East and North Africa, almost every corner of the globe has experienced social dislocation.

Now U.S. authorities are preparing for such eventualities on home soil, with major police departments like the NYPD staging “mobilization exercises” to train police to prepare for civil disorder in the United States.

Warnings and preparation for civil unrest coming to the United States have been voiced on a regular basis.

Back in 2008, U.S. troops returning from Iraq were earmarked for “homeland patrols” with one of their roles including helping with “civil unrest and crowd control”.

In December 2008, the Washington Post reported on plans to station 20,000 more U.S. troops inside America for purposes of “domestic security” from September 2011 onwards, an expansion of Northcom’s militarization of the country in preparation for potential civil unrest following a total economic collapse or a mass terror attack.

A report produced that same year by the U.S. Army War College’s Strategic Institute warned that the United States may experience massive civil unrest in the wake of a series of crises which it termed “strategic shock.”

“Widespread civil violence inside the United States would force the defense establishment to reorient priorities in extremis to defend basic domestic order and human security,” stated the report, authored by [Ret.] Lt. Col. Nathan Freir, adding that the military may be needed to quell “purposeful domestic resistance”.

The United States has continuity of government plans in place should martial law be declared by the President. However, the details of those plans have been so tightly guarded that even Congressman and Homeland Security Committee member Peter DeFazio (D – OR), who has the necessary security clearance, was denied access to view the material when he requested to do so back in July 2007.

Under the terms of the the National Emergency Centers Act or HR 645, first introduced in January 2009 and still awaiting passage, emergency camps are to be made available to “meet other appropriate needs, as determined by the Secretary of Homeland Security,” an open ended mandate which many fear could mean the forced detention of American citizens in the event of widespread rioting after a national emergency or total economic collapse.

With many Americans now becoming “pre-revolutionary” as a result of their fury at the Obama administration and equally unpopular lawmakers in Washington, potential civil unrest could spring not just from a poverty-stricken underclass, but also the shrinking middle class.

Perhaps that’s why the Department of Homeland Security is increasingly focusing its anti-terror apparatus on white middle class Americans, portraying them as domestic terrorists in a series of PSA videos. In addition, ‘Occupy’ protesters are also now being characterized as terrorists.

The fact that detention camps have been constructed inside America and are now being staffed and readied for “emergency” situations can no longer be ignored or ridiculed as a conspiracy theory.

Kellogg Brown & Root need to be completely transparent and explain where the camps are located, what they contain, and during what type of “emergencies” are they planned to be used for.

The Sad Reality of the Milk & Dairy Industry