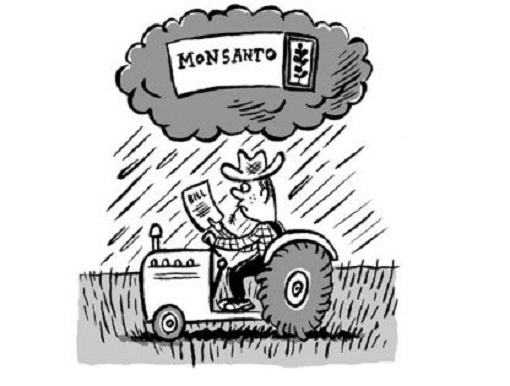 Monsanto contaminates the fields, trespasses onto the land taking samples and if they find any GMO plants growing there (or say they have), they then sue, saying they own the crop. It’s a way to make money since farmers can’t fight back and court and they settle because they have no choice.

And they have done and are doing a bucket load of things to keep farmers and everyone else from having any access at all to buying, collecting, and saving of NORMAL seeds.

1.  They’ve bought up the seed companies across the Midwest.

2.  They’ve written Monsanto seed laws and gotten legislators to put them through, that make cleaning, collecting and storing of seeds so onerous in terms of fees and paperwork and testing and tracking every variety and being subject to fines, that having normal seed becomes almost impossible (an NAIS approach to wiping out normal seeds). Does your state have such a seed law? Before they existed, farmers just collected the seeds and put them in sacks in the shed and used them the next year, sharing whatever they wished with friends and neighbors, selling some if they wanted. That’s been killed.

In Illinois, which has such a seed law, Madigan, the Speaker of the House, his staff is Monsanto lobbyists.

3.  Monsanto is pushing anti-democracy laws (Vilsack’s brainchild, actually) that remove community’ control over their own counties so farmers and citizens can’t block the planting of GMO crops even if they can contaminate other crops. So if you don’t want a GM-crop that grows industrial chemicals or drugs or a rice growing with human DNA in it, in your area and mixing with your crops, tough luck.

Check the map of just where the Monsanto/Vilsack laws are and see if your state is still a democracy or is Monsanto’s. A farmer in Illinois told me he heard that Bush had pushed through some regulation that made this true in every state. People need to check on that.

4.  For sure there are Monsanto regulations buried in the FDA right now that make a farmer’s seed cleaning equipment illegal (another way to leave nothing but GM-seeds) because it’s now considered a “source of seed contamination.” Farmer can still seed clean but the equipment now has to be certified and a farmer said it would require a million to a million and half dollar building and equipment … for EACH line of seed. Seed storage facilities are also listed (another million?) and harvesting and transport equipment. And manure. Something that can contaminate seed. Notice that chemical fertilizers and pesticides are not mentioned.

You could eat manure and be okay (a little grossed out but okay). Try that with pesticides and fertilizers. Indian farmers have. Their top choice for how to commit suicide to escape the debt they have been left in is to drink Monsanto pesticides.

5.  Monsanto is picking off seed cleaners across the Midwest. In Pilot Grove, Missouri, in Indiana (Maurice Parr), and now in southern Illinois (Steve Hixon). And they are using US marshals and state troopers and county police to show up in three cars to serve the poor farmers who had used Hixon as their seed cleaner, telling them that he or their neighbors turned them in, so across that 6 county areas, no one talking to neighbors and people are living in fear and those farming communities are falling apart from the suspicion Monsanto sowed. Hixon’s office got broken into and he thinks someone put a GPS tracking device on his equipment and that’s how Monsanto found between 200-400 customers in very scattered and remote areas, and threatened them all and destroyed his business within 2 days.

So, after demanding that seed cleaners somehow be able to tell one seed from another (or be sued to kingdom come) or corrupting legislatures to put in laws about labeling of seeds that are so onerous no one can cope with them, what is Monsanto’s attitude about labeling their own stuff? You guessed it – they’re out there pushing laws against ANY labeling of their own GM-food and animals and of any exports to other countries. Why?

We know and they know why.

As Norman Braksick, the president of Asgrow Seed Co. (now owned by Monsanto) predicted in the Kansas City Star (3/7/94) seven years ago, “If you put a label on a genetically engineered food, you might as well put a skull and crossbones on it.”

And they’ve sued dairy farmers for telling the truth about their milk being rBGH-free, though rBGH is associated with an increased risk of breast, colon and prostate cancers.

I just heard that some seed dealers urge farmers to buy the seed under the seed dealer’s name, telling the farmers it helps the dealer get a discount on seed to buy a lot under their own name. Then Monsanto sues the poor farmer for buying their seed without a contract and extorts huge sums from them.

Here’s a youtube video that is worth your time. Vandana Shiva is one of the leading anti-Monsanto people in the world. In this video, she says (and this video is old), Monsanto had sued 1500 farmers whose fields had simply been contaminated by GM-crops. Listen to all the ways Monsanto goes after farmers.

Do you know the story of Gandhi in India and how the British had salt laws that taxed salt? The British claimed it as theirs. Gandhi had what was called a Salt Satyagraha, in which people were asked to break the laws and march to the sea  and collect the salt without paying the British. A kind of Boston tea party, I guess.

Thousands of people marched 240 miles to the ocean where the British were waiting. As people moved forward to collect the salt, the British soldiers clubbed them but the people kept coming. The non-violent protest exposed the British behavior, which was so revolting to the world that it helped end British control in India.

Vandana Shiva has started a Seed Satyagraha – nonviolent non-cooperation around seed laws – has gotten millions of farmers to sign a pledge to break those laws.

American farmers and cattlemen might appreciate what Gandhi fought for and what Shiva is bringing back and how much it is about what we are all so angry about – loss of basic freedoms. [The highlighting is mine.]

The Seed Satyagraha is the name for the nonviolent, noncooperative movement that Dr. Shiva has organized to stand against seed monopolies. According to Dr. Shiva, the name was inspired by Gandhi’s famous walk to the Dandi Beach, where he picked up salt and said, “You can’t monopolize this which we need for life.” But it’s not just the noncooperation aspect of the movement that is influenced by Gandhi. The creative side saving seeds, trading seeds, farming without corporate dependence–without their chemicals, without their seed.

” All this is talked about in the language that Gandhi left us as a legacy. We work with three key concepts.”

“I believe that these concepts, which are deep, deep, deep in Indian civilization, Gandhi resurrected them to fight for freedom. They are very important for today’s world because so far what we’ve had is centralized state rule, giving way now to centralized corporate control, and we need a third alternate. That third alternate is, in part, citizens being able to tell their state, ‘This is what your function is. This is what your obligations are,’ and being able to have their states act on corporations to say, ‘This is something you cannot do.’”

” (Three) Satyagraha, non-cooperation, basically saying, ‘We will do our thing and any law that tries to say that (our freedom) is illegal… we will have to not cooperate with it. We will defend our freedoms to have access to water, access to seed, access to food, access to medicine.’”