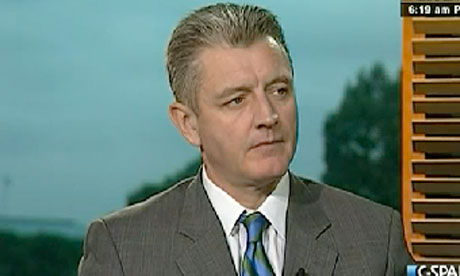 (Left) Tom Vanden Brook (on C-Span in 2010), a senior reporter for USA Today apparently targeted by a cyber-attack of misinformation and harassment. Photograph: guardiannews.com

The report by USA Today in which two of the paper’s employees became targets of a widespread and dishonest online disinformation campaign immediately after making inquiring calls to several intelligence contractors with ties to the US military might be very surprising to those of the nation’s journalists who only pay attention to our intelligence and security community and its conduct when some of its members are caught with prostitutes. The other dozen or so will not be surprised at all.

In the case that the guilty party is found, and does indeed turn out to be one of the private firms that the Pentagon has hired to provide “information operations” for use in Afghanistan, what are the consequences likely to be?

To judge from the last known incident in which several government contractors were actually caught planning a far more sophisticated campaign of intimidation against yet another journalist, the consequences will not be so bad as to prevent others from doing the same thing. It’s easy enough, especially for those firms that are encouraged by their government clients to produce new and better ways by which to lie and discredit. And there’s money in it.

Early in 2011, four contracting firms with strong government ties – HBGary Federal, Palantir, Berico and Endgame Systems – decided to combine their capabilities and set up a high-end private info warfare unit called Team Themis. Bank of America asked them to write a proposal for a covert campaign against WikiLeaks. Aside from hacking the group’s European servers, the team raised the possibility of going after Salon contributor Glenn Greenwald, a prominent WikiLeaks supporter. “These are established professionals that have a liberal bent, but ultimately most of them if pushed will choose professional preservation over cause, such is the mentality of most business professionals,” wrote HBGary Federal CEO Aaron Barr. He resigned with a severance package a few weeks after the affair was exposed by Anonymous; soon afterwards, he got a new job with another government contractor.

What of the others? Berico simply broke ties with HBGary Federal, as if it were merely a bad influence. Endgame Systems, whose execs explicitly noted in internal emails that their government clients didn’t want its name appearing in a press release, was barely noted by the press at all – until, a few months later, Business Week discovered that their shyness may stem from the fact that they have the capability to take out West European airports via cyber attacks (if you’ve got a couple of million dollars to pay for that).

Palantir, which received seed money from the CIA’s investment arm, In-Q-Tel, and shares founders with PayPal, made a public apology to the effect that the cyber-plotting did not reflect the company’s values, and put one of the employees involved, Matthew Steckman, on leave. A few months later, when the press had lost interest, Palantir brought him back on. Nothing at all seems to have happened to another employee, Eli Bingham, who was also heavily involved. When Palantir throws its annual convention, it still attracts keynote speakers like former DHS Secretary Michael Chertoff – who happens to be on the board of another huge contractor, BAE Systems, which, in turn, happened to have done some business with HBGary Federal, as well.

To be fair, these sorts of companies provide valuable services to the US and its allies. For instance, when US Central Command (CentCom)needed software that would allow 50 of its information warfare people to pretend to be 500 entirely fake people who don’t exist outside the internet, it had the USAF put out a call for bids. A number of contractors were up for the job – including the ethically challenged HBGary Federal – but only one of them could actually win.

Perhaps the others can provide this sort of “persona management” capability to other, private clients with a need to discredit their enemies in a clandestine fashion. I can think of about a dozen journalists they might want to go after. The rest won’t be a problem.