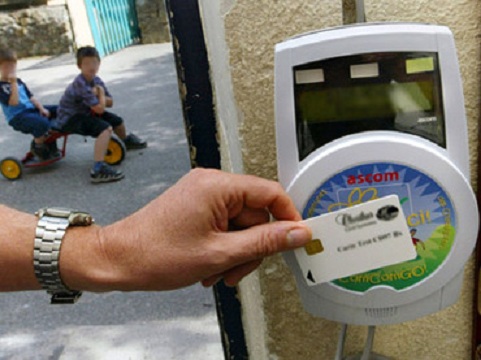 A school district in Texas came under fire earlier this year when it announced that it would require students to wear microchip-embedded ID cards at all times. Now students who refuse to be monitored say they are feeling the repercussions.

Since October 1, students at John Jay High School and Anson Jones Middle School in San Antonia, Texas have been asked to attend class clasping onto photo ID cards equipped with radio-frequency identification chips to keep track of each and every pupil’s personal location. Educators insist that the endeavor is being rolled out in Texas to relax the rampant truancy rates devastating the state’s school and the subsequent funding they are failing to receive as a result, and pending the program’s success the RFID chips could soon come to 112 schools in all and affect nearly 100,000 students.

Some pupils say they are already seeing the impact, though, and it’s not one they are very anxious to experience. Students who refuse to walk the schoolhouse halls with a location-sensitive sensor in their pocket or around their neck are being tormented by instructors and being barred from participating in certain school-wide functions, with some saying they are even being turned away from common areas like cafeterias and libraries.

Andrea Hernandez, a sophomore at John Jay, says educators have ignored her pleas to have her privacy respected and have told her she can’t participate in school elections if she doesn’t submit to the tracking program.

To Salon, Hernandez says subjecting herself to constant monitoring by way of wearing a RFID chip is comparable to clothing herself in the “mark of the beast.” When she reached out to WND.com to reveal the school’s response, though, she told them that she was threatened with exclusion from picking a homecoming king and queen for not adhering to the rules.

“I had a teacher tell me I would not be allowed to vote because I did not have the proper voter ID,” Hernandez told WND. “I had my old student ID card which they originally told us would be good for the entire four years we were in school. He said I needed the new ID with the chip in order to vote.”

Even after Hernandez politely refused to wear an RFID chip, Deputy Superintendent Ray Galindo offered a statement that suggests that both the student’s religious and civil liberty-anchored arguments will only allow her some leeway for so long.

“We are simply asking your daughter to wear an ID badge as every other student and adult on the Jay campus is asked to do,” Galindo wrote to the girl’s parents, WND reports. If she is allowed to forego the tracking now, he continued, it could only be a matter of time before the school signs off on making location-monitoring mandatory and the repercussions will be more than just revoking voting rights for homecoming contests.

“I urge you to accept this solution so that your child’s instructional program will not be affected. As we discussed, there will be consequences for refusal to wear an ID card as we begin to move forward with full implementation,” Galindo continued.

The girl’s father, Steve Hernandez, tells WND that the school has been somewhat willing to work with the daughter’s demands, but insists that her family “would have to agree to stop criticizing the program” and start publically supporting it.

“I told him that was unacceptable because it would imply an endorsement of the district’s policy and my daughter and I should not have to give up our constitutional rights to speak out against a program that we feel is wrong,” Mr. Hernandez responded.

By reversing the poor attendance figures, the Northside Independent School District is expected to collect upwards of $2 million in state funding, with the program itself costing around one-quarter of that to roll out and another $136,005 annually to keep it up and running. The savings the school stands to make in the long run won’t necessarily negate the other damages that could arise: Heather Fazio, of Texans for Accountable Government tells WND that for $30 she filed a Freedom of Information Act request and received the names and addresses of every student in the school district.

Kirsten Bokenkamp of the ACLU told the San Antonio Express-News earlier this year that her organization was expecting to challenge the board’s decision this to roll out the tracking system, but the school has since gone ahead anyway. Steve Hernandez tells WND that he approached the ACLU for possible representation in his daughter’s case, but Rebecca Robertson of a local branch of the organization said, “the ACLU of Texas will not be able to represent you or your daughter in this matter,” saying his daughter’s case in particular fails to meet the criteria they use to pick and choose civil liberties cases to take on.