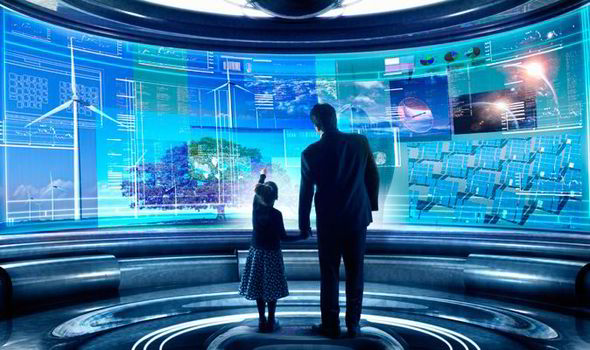 In a somewhat disturbing case of life imitating art, it seems that real world turmoil is catching up with classic science fiction projections of a dystopian future as envisioned by writers like George Orwell and Ray Bradbury — a world where the general populace is under constant surveillance, and the technology that we’ve become overly dependent on has become our greatest liability.

If the recent NSA debacle wasn’t alarming enough for you, Google recently acquired Nest, the smart device firm and home automation pioneer. Home automation, of course, means having  multiple devices (kitchen appliances, thermostats, locks and security cameras, etc.) equipped with wireless capability and controllable through an app on a smart device. Your phone, in essence, becomes a remote control for your entire house. Some systems, like the one which Samsung recently premiered at CES 2014, will only enable the company’s own products to interact with one another, and the more glitzy products like the ADT home security systems allow homeowners to control their thermostats and other electronics (regardless of brand) with their smart phone.

If it sounds too good to be true…that’s because it potentially is, as this article from Trend Labs explains. The IP configuration on the devices is simple and the security options are quite limited, leaving them easily penetrable by hackers and thieves. Part of the risk, of course, is that if you have a home security system that can be entirely disabled through a smartphone, a thief could hack into your accounts, deactivate your entire security system with the push of a mere button, and enter your home freely. All of your data becomes more accessible to hackers, and now Google will have even more comprehensive data to sell to third party candidates who can market products even more aggressively to you.

One of the great things about science-fiction is that, whatever paranoid projections it makes about future global conditions, it’s always very much a product of its own time.This news raises all sorts of issues for an overly imaginative person.

The situation is like George Orwell’s 1984, where the general public can’t even so much as think in privacy. Everyone is under constant surveillance, and the entire system is under the pretense that this is somehow what’s best for society.

The citizens of Orwell’s fictional Oceania all have “telescreens” in their apartments, which enables Big Brother (whether that’s merely a governmental agency monitoring the public or one chief observer is never entirely clear) to supervise every given moment of everyone’s lives, and to possess an absurd level of intel on every given person under the jurisdiction of their central government. Replace telescreens with tablets, and Big Brother with Facebook and Google, and ask yourself how much of a deviation this setup is from life as we know it today.

It also calls to mind a particularly eerie story penned by Ray Bradbury 1950 entitled August 2026: There Will Come Soft Rains. The story focuses on “a-day-in-the-life” of a fully automated home after the extinction of the human race. The house prepares meals, recites important dates and reminders through an intercom system with a pre-recorded voice. We come to learn, throughout the course of the story, that the family who owned the house have been wiped out. We hear about silhouettes permanently fixed unto the side of the homes, in a manner that evoked the victims of Hiroshima and Nagasaki who were vaporized in an atomic blast.

So Bradbury’s grim musings couldn’t have been more fitting for his time, and they are startlingly relevant now. Just as humans channel their ingenuity and creativity into constructive things, or things which enhance life for humanity (all of the advancements in home technology, for instance) the misapplication of that creativity — and the misapplication of technology itself– can have dire, even catastrophic, consequences on humanity.

Is it really as bad as all of that?

Only time will tell, but it does seem more and more likely that whatever minor conveniences the technology yields will hardly justify the potential security risks.

You would hope that, in some cases, paranoid science-fiction literature would help prevent future atrocities from occurring by anticipating them. It’s sort of comforting that we’ve not yet reached the place anticipated by Arthur C. Clarke, where computers have superior intellect to humans and can function, not only with autonomy, but willfully against people. It’s pretty disconcerting, however, that we seem to be drawing nearer and nearer to those imagined realities, not merely a novel thought and fodder for pop literature, but a grim facet of our day to day lives.