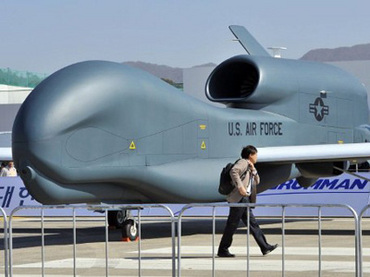 The tiny town of Lakota, N.D., is quickly becoming a key testing ground for the legality of the use of unmanned drones by law enforcement after one of its residents became the first American citizen to be arrested with the help of a Predator surveillance drone.

The bizarre case started when six cows wandered onto Rodney Brossart’s 3,000 acre farm. Brossart, an alleged anti-government “sovereignist,” believed he should have been able to keep the cows, so he and two family members chased police off his land with high powered rifles.

After a 16-hour standoff, the Grand Forks police department SWAT team, armed with a search warrant, used an agreement they’ve had with Homeland Security for about three years, and called in an unmanned aerial vehicle to pinpoint Brossart’s location on the ranch. The SWAT team stormed in and arrested Brossart on charges of terrorizing a sheriff, theft, criminal mischief, and other charges, according to documents.

Brossart says he “had no clue” they used a drone during the standoff until months after his arrest.

“We’re not laying over here playing dead on it,” says Brossart, who is scheduled to appear in court on April 30. He believes what the SWAT team did was “definitely” illegal.

“We’re dealing with it, we’ve got a couple different motions happening in court fighting [the drone use].”

Repeated calls to Brossart’s attorney were not returned. Douglas Manbeck, who is representing the state of North Dakota in the case, says the drone was used after warrants were already issued.

“The alleged crimes were already committed long before a drone was even thought of being used,” he says. “It was only used to help assure there weren’t weapons and to make [the arrest] safer for both the Brossarts and law enforcement.”

“I know it’s a touchy subject for anyone to feel that drones are in the air watching them, but I don’t think there was any misuse in this case,” he added.

While there’s no precedent for the use of unmanned drones by law enforcement, John Villasenor, an expert on information gathering and drone use with the Washington, D.C.-based Brookings Institution, says he’d be “floored” if the court throws the case out. Using a drone is no different than using a helicopter, he says.

“It may have been the first time a drone was used to make an arrest, but it’s certainly not going to be the last,” Villasenor says. “I would be very surprised if someone were able to successfully launch a legal challenge [in Brossart’s case].”

Villasenor points to two Supreme Court cases—California v. Ciraolo in 1986 and Florida v. Riley in 1989— that allow law enforcement to use “public navigable airspace, in a physically nonintrusive manner” to gather evidence to make an arrest.

By summertime, there may be many more cases like Brossart’s—on May 14, the government must begin issuing permits for drone use by law enforcement.

Currently, about 300 law enforcement agencies and research institutions—including the Grand Forks SWAT team—have “temporary licenses” from the FAA to use drones. Currently, drones are most commonly used by Homeland Security along America’s borders.

Bill Macki, head of the Grand Forks SWAT team, says Brossart’s case was the first and only time they’ve used a drone to help make an arrest—they tried one other time (to search for an armed, suicidal individual), but gusty weather conditions made navigation impossible.

[The Coming Drone Revolution: What You Should Know]

With a population of less than 70,000, it doesn’t make sense for the Grand Forks police department to own a helicopter, but the ability to call in a drone when necessary can provide a similar purpose.