Dolphins at Sea ‘Greet’ Each Other 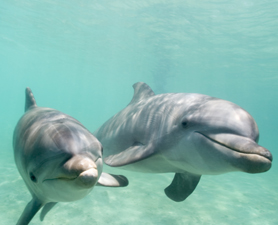 Bottlenose dolphins swap signature whistles with each other when they meet in the open sea, a new study reports, suggesting that these marine mammals engage in something akin to a human conversation.

Earlier research found that signature whistles are unique for each dolphin, with the marine mammals essentially naming themselves and communicating other basic information.

A signature dolphin whistle in human speak, might be comparable to, “Hi, I’m George, a large, three-year-old dolphin in good health who means you no harm.”

The latest study, published in the Proceedings of the Royal Society B, is the first to show how free-ranging dolphins in the wild use these whistles at sea. The findings add to the growing body of evidence that dolphins possess one of the most sophisticated communication systems in the animal kingdom, perhaps even surpassing that of humans.

“In my mind, the term ‘language’ describes the human communication system; it is specific to us,” co-author Vincent Janik of the University of St. Andrews Sea Mammal Research Unit, told Discovery News. “It is more fruitful to ask whether there are communication systems with similar complexity. I think the dolphin system is probably as complex as it gets among animals.”

Janik and colleague Nicola Quick studied how bottlenose dolphins in St. Andrews Bay, off the coast of northeast Scotland, communicate with each other. While in a small, quiet boat, the researchers followed the wild dolphins and recorded their vocalizations.

Analysis of the observations and recordings found that the dolphins usually swam together in a group moving slowly and relatively quietly.

“When another group approaches, usually one or more animals start to produce their signature whistles,” Janik said. “We then hear dolphins from the other group calling back with their own signatures, and after or during this counter-calling the animals get together as one group and continue swimming together. Shortly after the union of the groups, they become much more quiet again.”

NEWS: Dolphins Team Up To Get the Girl

Most animals have some sort of communication system that allows them to make similar introductions and meetings, but dolphins are unique in that they can invent and copy new sounds. This is “unlike non-human primates, who are stuck with their species-specific repertoire,” he said.

The researchers also noticed that usually just one dolphin from each group would emit a signature whistle before the other group members would join the second group. This might mean that dolphins elect a “spokesman” to represent the entire group during meetings. Such an individual may be an older dolphin, Janik said, but he thinks the other dolphins are not fully silent, and may be using echolocation instead of whistles.

“We don’t know whether echolocation works in this way, but it seems like a viable hypothesis,” he said. “In that case, the whistle exchange is more of a greeting ceremony that communicates a friendly intention and is perhaps not needed to identify the group after the first introduction.”

Dolphins at a distance may rely more upon sounds and echolocation for their communications than visual, scent and other signals. This is likely due to their marine environment and social structure. A dolphin can hear the whistle of another dolphin over a distance of about six miles and with lots of noise in the background.

Heidi Harley, a bottlenose dolphin expert who is a professor of psychology at the New College of Florida, told Discovery News that she believes the findings are key to understanding how dolphins use signature whistles.

She added, “I was surprised to learn that the exchanges appeared to be between only a single individual in each group.”