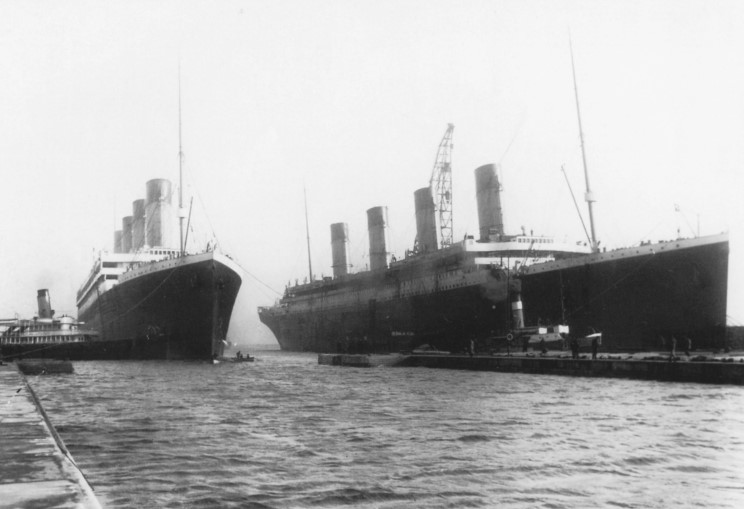 “The perfunctory trials of the Titanic, a pale imitation of the Olympic’s, were followed by an outbreak of fire in bunker number ten. It could have been dealt with at Southampton, with all a great port’s fire-fighting facilities and without affecting sailing time; instead, an extra twelve firemen were specially signed on to deal with it at sea. The blaze, . . . was concealed from [Captain Maurice Harvey] Clarke, the Board of Trade inspector. Why did Smith not have the fire put out as soon as possible? Why did he hide it? Come to that, why did his ship consistently show a slight list to port in a calm sea before the collision, as noted by several aboard? Was there some undeclared damage to account for this—a leak in the weakened stern, for example? Why after the collision did Smith run the engines slow ahead for some minutes, as attested by witnesses, a move which would have exacerbated the flooding the forward compartments? Why was counter- flooding not attempted as a means of keeping the ship on an even keel for longer? Why did Dr. [Robert D.] Ballard find a bulkhead not on his plan of the Titanic when exploring the wreck? . . .

Neither Dr. Ballard nor anyone else who has visited the wreck for pictorial or plundering purposes has produced a single object or photograph of anything showing the name “Titanic”—except on the bow and on one luggage–tag. The name is shown on nothing else both built into the ship and recovered or recorded so far. We found this sufficiently remarkable to invite every likely source to settle the matter once and for all by furnishing proof that the wreck was the Titanic. Reactions ranged from amusement via irritation to ridicule and shock that anyone would raise such a question.

Our difficulty was that a substitution, far-fetched or no, looked like a promising explanation for so many puzzles [the author inferring that White Star’s severely damaged Olympic was marginally repaired and sent to sea as the “Titanic;” that the real Titanic, renamed “Olympic,” went on to be used in World War I; and that J. P. Morgan benefited from the wreck] . . . .

But in terms of interest and importance, J. P. Morgan, the real owner of the ill-fated ship, is the outstanding absentee, topping the unusually lengthy list of fifty-five passengers known to have cancelled their bookings at the eleventh hour [including Morgan’s business partner and the outgoing Ambassador to Paris Robert Bacon, American steel baron Henry C. Frick, railroad and shipping tycoon George W. Vanderbilt; America’s chocolate king Milton Hershey, New York finance magnate Horace J. Harding and Rev. J. Stuart Holden, rector of St. Paul’s Anglican Cathedral in London]. He was too ill to sail on the world’s most lavish liner, but well enough to reunite with his mistress in Aix-les-Bains, where he was found ‘in excellent health’ by a reporter ‘just after the ship went down.’ Asked about the disaster, he ‘indicated extreme distress.’ He had arrived at the French resort after a Nile cruise and visits to Rome and Florence [having conferred with his masters in the Vatican and Borgo Santo Spirito]; the news confirming the disaster broke on his seventy-fifth birthday, 17 April [imparting to this murderous, financial tyrant a most enjoyable birthday!]. Fortunately a large part of his art collection, kept in Europe to avoid American import duty (happily eased just as Britain introduced death duties), happened to miss the ship ‘because of last-minute hold-ups in crating.’ The ultimate owner of the lost ship was thus twice blessed: to him that hath shall be given.” {3}

Seated in the center is King Edward VII (1901-1910), the Black Pope’s most
powerful Freemason over his British Empire. Standing on the stairs, fourth
from the top, is John P. Morgan, the Black Pope’s most powerful Freemason in
his “Holy Roman” Fourteenth Amendment American Empire. Both men were
beholden to the dictation of the Company, English Jesuit Bernard Vaughan being
one of several. The King and Morgan were intimate friends and mutually
ruthless; Edward (while the Prince of Wales), covering for the murders of artist
Walter Sickert (alias “Jack the Ripper”); and Morgan, having caused the four
major US financial crises from 1873 to 1893. In 1907 both men, in ruling their
national banking empires, caused America’s greatest financial panic leading to
the secret drafting of the Federal Reserve Act at Georgia’s Jekyll Island by
Morgan agent Henry P. Davison. Aware of the conspiracy to monopolize the
nation’s credit into the hand of James Cardinal Gibbons’ Morgan-ruled empire,
Jewish Freemason John Jacob Astor and others resisted the plot. The remedy
was to send Astor to his grave on the Titanic (or possibly the damaged Olympic),
the ensuing American and British investigations to serve as mere cover-ups.
Neither Edward VII nor Morgan lived to see the creation of the Order’s Federal
Reserve Bank, which, with the Pope’s Masonic Bank of England, financed WWI.

Morgan: American Financier, Jean Strouse, (New York: Random House, 1999).
“ ‘Why was the true role of J. Pierpont Morgan, the banker and tycoon who was the real owner of the Titanic, covered up at the American inquiry? How did the Attorney-General [Sir Rufus Isaacs], who dominated the British inquiry, get away with insider-trading in shares of the Marconi Company at the very moment its value was boosted by the key role of wireless in the rescue?’ . . . Were two of the surviving crewman who were on watch at or near the bridge of the Titanic when she struck her iceberg bribed by White Star to keep their mouths shut, both at the inquiries and long afterwards? What guilty secret did they share? Did the officer of the watch ignore three earlier warnings of ice from the crow’s nest?’ . . .

‘Why did Captain Smith accelerate into an exceptionally large and southerly ice field of which he had been warned repeatedly, both before and during his last voyage?’