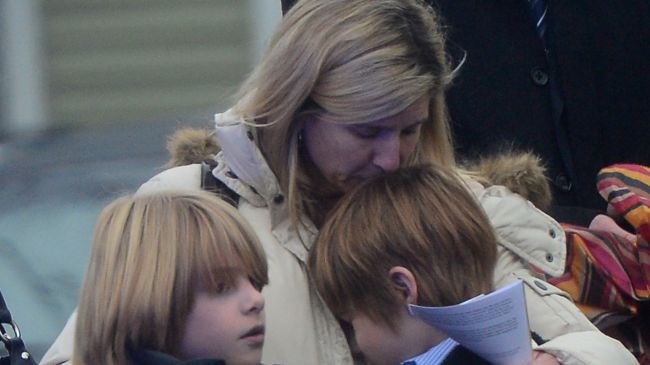 Mourners leave from the Honan funeral home in the small town of Newtown, Connecticut after attending the funeral for six-year-old Jack Pinto, one of the victims of the Sandy Hook elementary school shooting.
—

by Gordon Duff and Press TV

In truth, the public may well just be sick of hearing stories about “lone gunmen.”  Of all possible horrors, this one, even more than the Benghazi killings, is loaded with political implication, not just “gun control,” but a clear attack on the security of every American family.

Editor’s note:  No article in history has drawn more ire from Israeli controlled “media assets” than this one.  Read it and ask yourself…why?

Days later, the Sandy Hook Massacre, the iconic slaughter of twenty small children, is now looking like a terrorist attack, not a “murder suicide.” Was “lone gunman” Adam Lanza a “patsy,” the same word Lee Harvey Oswald used to describe himself before being “silenced” in November 1963?

Today, Michael Harris, former Republican candidate for governor of Arizona and GOP campaign finance chairman, in an internationally televised news broadcast, cited “Israeli revenge” in, what he called, “the terrorist attack in Connecticut.”

Harris cited Israeli “rage” against the US and against President Barack Obama. By “Israel,” we mean “Netanyahu.”

The mission was to teach America a lesson, knowing that “America would take the punishment, keep “quiet,” and let a ‘fall guy’ take the blame.”

A “fall guy” is another word for “patsy.”

Harris, citing the flood of inconsistencies in the “cover story,” pointed out the following, “The facts are now becoming obvious. This is another case where Israel has chosen violence and terrorism where their bullying in Washington has failed. Israel believes the US “threw them under the bus,” particularly after the recent Gaza war, allowing Israel to be humiliated in the United Nations.
YouTube – Veterans Today –

Their response was to stage a terror attack, targeting America in the most hideous and brutal way possible, in fact, an Israeli “signature attack,” one that butchers children, one reminiscent of the attacks that killed so many children in Gaza?”

Washington is terrified of Israel, their powerful lobby and its relationship with organized crime. Now, a key former Senator, Chuck Hagel, who has helped expose this fact, is likely to be nominated as the secretary of defense, despite vocal protests from Israel.

Today, Israeli News gave further credence to Harris’ analysis when they issued the following statements regarding the probable nomination of Hegel:

“Chuck Hagel’s statements and actions regarding Israel have raised serious concerns for many Americans who care about Israel,” said the Republican Jewish Coalition (RJC) Executive Director, Matt Brooks. “The Jewish community and every American who supports a strong US-Israel relationship have cause for alarm if the president taps Hagel for such an important post.”

“The appointment of Chuck Hagel would be a slap in the face for every American who is concerned about the safety of Israel,” he asserted

Citing a 2006 interview with Hegel, the news continued, “The political reality is…that the Jewish lobby intimidates a lot of people up here. I have always argued against some of the dumb things they do because I don’t think it’s in the interest of Israel. I just don’t think it’s smart for Israel.”

Hagel also said he didn’t think he had ever signed one of the letters the American Israel Public Affairs Committee (AIPAC) regularly circulates to demonstrate support for Israel or tough stands against parties such as Iran.

“I didn’t sign the letter because it was a stupid letter…I’m not an Israeli senator, I’m a United States senator.”

During his interview today, Mike Harris explained his rationale for looking to Israel as responsible for Sandy Hook, saying:

“This is exactly what Israel did in Norway; the political party that voted sanctions against Israel was retaliated against by a “lone gunman” who killed 77 children.

One three star general is quoted as saying,

“Harris hit the nail right on the head and it is about time someone spoke up.”

From an anonymous email spreading around the country:

“Investigators searching the Connecticut home gunman Adam Lanza shared with his  mother, Nancy Lanza, seized cellphones, computers and computer games, but found  nothing at the residence to indicate he was taking medication, Hearst Connecticut Newspapers

This is only a small percentage of the irregularities noted in what now seems to be more of a cover-up than investigation.

In truth, the public may well just be sick of hearing stories about “lone gunmen.” Of all possible horrors, this one, even more than the Benghazi killings, is loaded with political implication, not just “gun control,” but a clear attack on the security of every American family.

The simplest thing would be to sit back and accept what we are told without examining who gains, who loses and “why now?”

Is Harris right? Would Israel order the deaths of twenty tiny children to make a political point? Have they done this before?

Is Harris right about that too?

Moments ago, Harris phoned me. I asked him if, hours later, he was still willing to back up his statements.

His answer was simple:

“You murder children as part of ‘business as usual,’ you shouldn’t be surprised that when children are murdered, people look to you.”