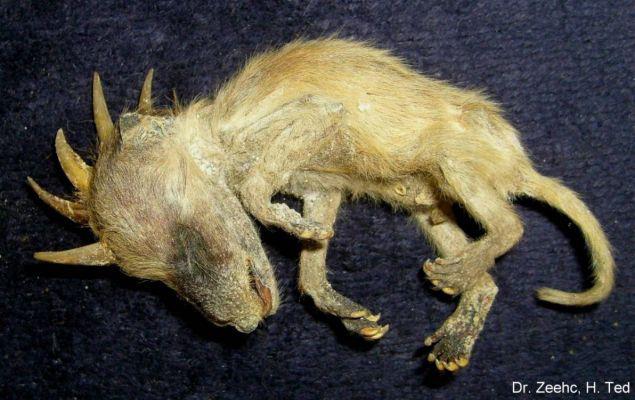 Mysteries of the universe and the world Chupacabra Even though some sightings date back to the 1970s, El Chupacabra – “the goat sucker” – is primarily a phenomenon of the 1990s, and its fame has largely been spread by the Internet. The sightings started in earnest in 1995 with reports coming out of Puerto Rico of a strange creature that was killing farmers’ livestock – chickens, ducks, turkeys, rabbits and, of course, goats – sometimes hundreds of animals in one evening. The farmers, who were familiar with the killing practices of wild dogs and other predators, claimed that the methods of this unknown beast were different.

It didn’t try to eat the animals it killed, for example; nor did it drag them away to be devoured elsewhere. Instead, the creature killed by draining its victims of blood, usually through small incisions. Then came the bizarre eyewitness descriptions: about the size of a chimpanzee hops about like a kangaroo large glowing red eyes grayish skin and hairy arms long snake-like tongue sharp fangs quills running along its spine that seem to open and close like a fan some believe it may even have wings Toward the end of the ’90s, the sightings of Chupacabra began to spread.

The creature was blamed for animal killings in Mexico, southern Texas and several South American countries. In May and June of 2000, a rash of incidents took place in Chile, according to certain newspapers there. In fact, some of the most incredible claims yet came out of those sightings: that at least one of the creatures was caught alive by local authorities, then handed over to official agencies of the US government.

What is it? Theories abound, including: an unknown but natural species of predator; misidentified known predators; the result of genetic experimentation; an alien. Most serious researchers consider Chupacabra merely folklore, perpetuated by over-enthusiastic locals immersed in superstition or a penchant for telling tall, exaggerated tales. Yet you can be sure that we haven’t seen or heard the last of Chupacabra.