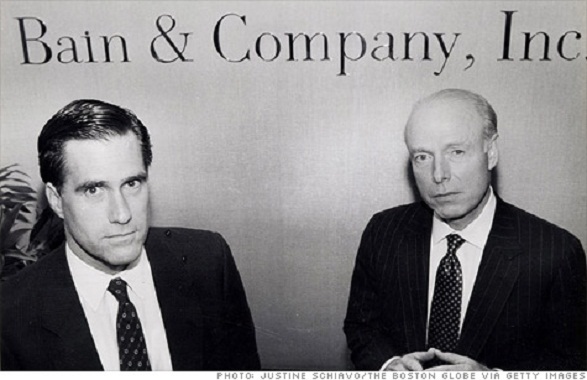 BEIJING — As the Chinese government forges ahead on a multibillion-dollar effort to blanket the country with surveillance cameras, one American company stands to profit: Bain Capital, the private equity firm founded by Mitt Romney.

Chinese cities are installing surveillance systems with hundreds of thousands of cameras like these at a Beijing building site.

In December, a Bain-run fund in which a Romney family blind trust has holdings purchased the video surveillance division of a Chinese company that claims to be the largest supplier to the government’s Safe Cities program, a highly advanced monitoring system that allows the authorities to watch over university campuses, hospitals, mosques and movie theaters from centralized command posts.

The Bain-owned company, Uniview Technologies, produces what it calls “infrared antiriot” cameras and software that enable police officials in different jurisdictions to share images in real time through the Internet. Previous projects have included an emergency command center in Tibet that “provides a solid foundation for the maintenance of social stability and the protection of people’s peaceful life,” according to Uniview’s Web site.

Such surveillance systems are often used to combat crime and the manufacturer has no control over whether they are used for other purposes. But human rights advocates say in China they are also used to intimidate and monitor political and religious dissidents. “There are video cameras all over our monastery, and their only purpose is to make us feel fear,” said Loksag, a Tibetan Buddhist monk in Gansu Province. He said the cameras helped the authorities identify and detain nearly 200 monks who participated in a protest at his monastery in 2008.

Mr. Romney has had no role in Bain’s operations since 1999 and had no say over the investment in China. But the fortunes of Bain and Mr. Romney are still closely tied.

The financial disclosure forms Mr. Romney filed last August show that a blind trust in the name of his wife, Ann Romney, held a relatively small stake of between $100,000 and $250,000 in the Bain Capital Asia fund that purchased Uniview.

In a statement, R. Bradford Malt, who manages the Romneys’ trusts, noted that he had put trust assets into the fund before it bought Uniview. He said that the Romneys had no role in guiding their investments. He also said he had no control over the Asian fund’s choice of investments.

Mr. Romney reported on his August disclosure forms that he and his wife earned a minimum of $5.6 million from Bain assets held in their blind trusts and retirement accounts. Bain employees and executives are also among the largest donors to his campaign, and their contributions accounted for 10 percent of the money received over the past year by Restore Our Future, the pro-Romney “super PAC.” Bain employees have also made substantial contributions to Democratic candidates, including President Obama.

Bain’s decision to enter China’s fast-growing surveillance industry raises questions about the direct role that American corporations play in outfitting authoritarian governments with technology that can be used to repress their own citizens.

It also comes at a delicate time for Mr. Romney, who has frequently called for a hard line against the Chinese government’s suppression of religious freedom and political dissent.

As with previous deals involving other American companies, critics argue that Bain’s acquisition of Uniview violates the spirit — if not necessarily the letter — of American sanctions imposed on Beijing after the deadly crackdown on protests in Tiananmen Square. Those rules, written two decades ago, bar American corporations from exporting to China “crime-control” products like those that process fingerprints, make photo identification cards or use night vision technology.

Most video surveillance equipment is not covered by the sanctions, even though a Canadian human rights group found in 2001 that Chinese security forces used Western-made video cameras to help identify and apprehend Tiananmen Square protesters.

Representative Frank R. Wolf, Republican of Virginia, who frequently assails companies that do business with Chinese security agencies, said calls by some members of Congress to pass stricter regulations on American businesses have gone nowhere. “These companies are busy making a profit and don’t want to face realities, but what they’re doing is wrong,” said Mr. Wolf, who is co-chairman of the Tom Lantos Human Rights Commission.

In public comments and in a statement posted on his campaign Web site, Mr. Romney has accused the Obama administration of placing economic concerns above human rights in managing relations with China. He has called on the White House to offer more vigorous support of those who criticize the Chinese Communist Party“Any serious U.S. policy toward China must confront the fact that China’s regime continues to deny its people basic political freedoms and human rights,” according to the statement on his Web site. “The United States has an important role to play in encouraging the evolution of China toward a more politically open and democratic order.”

In recent years, a number of Western companies, including Honeywell, General Electric, I.B.M. and United Technologies, have been criticized for selling sophisticated surveillance-related technology to the Chinese government.

Other companies have been accused of directly helping China quash perceived opponents. In 2007, Yahoo settled a lawsuit asserting that it had provided the authorities with e-mails of a journalist who was later sentenced to 10 years in prison for sending an e-mail that prosecutors charged contained state secrets.

Cisco Systems is fighting a lawsuit in the United States filed by a human rights group over Internet networking equipment it sold to the Chinese government. The lawsuit asserts that the system, tailored to government demands, allowed the authorities to track down and torture members of the religious group Falun Gong.

Bain defended its purchase of Uniview, stressing that the Chinese company’s products were advertised as instruments for crime control, not political repression. “China’s increasingly urban population will face growing needs around personal safety and property protection,” the company said in a statement. “Video surveillance is part of the solution to that, as it is anywhere in the world.” The company also said that only one-third of Uniview’s sales were to public security bureaus.

William A. Reinsch, president of the National Foreign Trade Council in Washington, said it was up to the American government, not individual companies, to set the guidelines for such business ventures. “A lot of the stuff we’re talking about is truly dual use,” said Mr. Reinsch, a former Commerce Department official in the Clinton administration. “You can sell it to a local police force that will use it to track down speeders, but you can also sell it to a ministry of state security that will use it to monitor dissidents.”

But Adam Segal, a senior fellow at the Council on Foreign Relations and an expert on the intersection of technology and domestic security in China, said American companies could not shirk responsibility for the way their technology is used, especially in the wake of recent controversies over the sales of Western Internet filtering systems to autocratic rulers in the Arab world. “Technology companies have to begin to think about the ethics and political implications of selling these technologies,” he said.

Uniview is proud of its close association with China’s security establishment and boasts about the scores of surveillance systems it has created for local security agencies in the six years since the Safe Cities program was started.

“Social management and society building pose new demands for surveillance and control systems,” Uniview says in its promotional materials, which include an interview with Zhang Pengguo, the company’s chief executive. “A harmonious society is the essential nature of socialism with Chinese characteristics,” Mr. Zhang says.

Until now, Bain’s takeover of Uniview has drawn little attention outside China. The company was formerly the surveillance division of H3C, a joint venture between 3Com and Huawei, the Chinese telecommunications giant whose expansion plans in the United States have faced resistance from Congress over questions about its ties to the Chinese military.

In December, H3C announced that Bain had bought out the surveillance division and formed Uniview, although under terms of the buyout, H3C provides Uniview with products, technical support and, for a period of time, the use of its brand name. Bain controls Uniview but says it has no role in its day-to-day operations.

Bain is, however, well positioned to profit. According to the British firm IMS Research, the Chinese market for security camera networks was $2.5 billion last year, a figure that is expected to double by 2015, with more than two-thirds of that demand coming from the government. Uniview currently has just 1 percent of the market, the firm said.

Chinese cities are rushing to construct their own surveillance systems. Chongqing, in southwest China, is spending $4.2 billion on a network of 500,000 cameras, according to the state news media. Guangdong Province, the manufacturing powerhouse adjacent to Hong Kong, is mounting one million cameras. In Beijing, the municipal government is seeking to place cameras in all entertainment venues, adding to the skein of 300,000 cameras that were installed here for the 2008 Olympics.

By marrying Internet, cellphone and video surveillance, the government is seeking to create an omniscient monitoring system, said Nicholas Bequelin, a senior researcher at Human Rights Watch in Hong Kong. “When it comes to surveillance, China is pretty upfront about its totalitarian ambitions,” he said.

For the legion of Chinese intellectuals, democracy advocates and religious figures who have tangled with the government, surveillance cameras have become inescapable.

Yang Weidong, a politically active filmmaker, said a phalanx of 13 cameras were installed in and around his apartment building last year after he submitted an interview request to President Hu Jintao, drawing the ire of domestic security agents. In January, Ai Weiwei, the artist and public critic, was questioned by the police after he threw stones at cameras trained on his front gate.

Li Tiantian, 45, a human rights lawyer in Shanghai, said the police used footage recorded outside a hotel in an effort to manipulate her during the three months she was illegally detained last year. The video, she said, showed her entering the hotel in the company of men other than her boyfriend.

During interrogations, Ms. Li said, the police taunted her about her sex life and threatened to show the video to her boyfriend. The boyfriend, however, refused to watch, she said.

“The scale of intrusion into people’s private lives is unprecedented,” she said in a phone interview. “Now when I walk on the street, I feel so vulnerable, like the police are watching me all the time.”