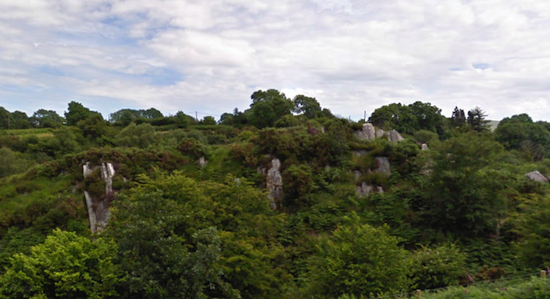 A new study has found the exact origin for some of Stonehenge’s oldest stones. The rocks, which may have been part of the inner ring and “horseshoe” portion of the ancient landmark, are now confirmed to have come from an outcropping of rocks in Wales called Craig Rhos-y-Felin in north Pembrokeshire — some 160 miles from Stonehenge. While the research is a worthy discovery in its own right,it could give some clues about how the massive stone circle was constructed.

The research was carried out by Robert Ixer and Richard Bevins from the University of Leicester and the National Museum of Wales, respectively, and published in the journal Archaeology in Wales. While the popular image of Stonehenge consists of concentric rings of doorway-like stones, that is just the most recent iteration of the monument. Those stones are thought to have come from 20 miles north of Stonehenge in Marlborough Downs. Other portions of the monument are made from “bluestone,” a catch-all term that incompasses several non-native forms of rock.

In their research, Ixer and Bevins focused on 700 of the several thousand small fragments of Welsh bluestone found in and around the Stonehenge area. It’s believed that these chips were taken from other nearby stones that are now lost but once a part of the Stonehenge complex, or perhaps an earlier iteration of Stonehenge. It’s even possible that a now-buried stone last seen in the 1950s within Stonehenge is comprised of the same Welsh rock.

Using these chips of rock, Ixer and Bevins made a painstaking comparison between the samples and rock outcroppings around Wales. The stone in question is some 460 million years old and of volcanic origin called foliated rhyolite. The list of possible sources was further whittled down by chemical analysis and finally confirmed through petrography — which examines the inter-relationship of textures and minerals within the rock.

This led the researchers to the Craig Rhos-y-Felin. Interestingly, this site is about five miles from another site thought to be the origin of other Welsh stones in the Stonehenge complex.

While this might seem frivolous, knowing the exact location of some of the Stonehenge rocks could give archaeologists an unprecedented chance to answer a fundamental question about the construction of the monument. While some academics have long argued that the Stonehenge rocks were intentionally mined and transported for the purpose of constructing the monument, some geologists maintain that the stones were picked up in Wales and deposited closer to Stonehenge by glaciers.

By studying Craig Rhos-y-Felin, scientists may be able to determine if the rocks were deliberately mined. Of course that wouldn’t explain how the stones were transported that far, and only hints at why these Welsh stones were used at all. It’s also curious, since Craig Rhos-y-Felin is in low country, and has a mountain range separating it from Stonehenge, complicating issues of transportation.

The work of Ixer and Bevins is remarkable for finding the exact origin of these stones, but the real work is only just beginning. Using their research, other scientists may be able to provide an entirely new look on the famous standing stones.