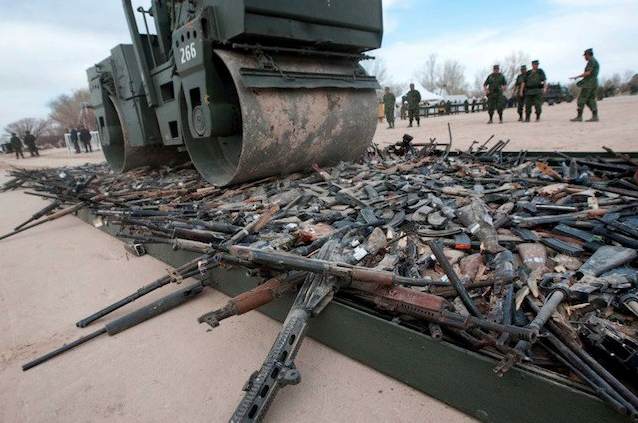 In 1929, the Soviet Union established gun control. From 1929 to 1953, about 20 million dissidents, unable to defend themselves, were rounded up and exterminated

In 1911, Turkey established gun control. From 1915 to 1917, 1.5 million Armenians, unable to defend themselves, were rounded up and exterminated.

Germany established gun control in 1938 and from 1939 to 1945, a total of 13 million Jews and others who were unable to defend themselves were rounded up and exterminated.

China established gun control in 1935. From 1948 to 1952, 20 million political dissidents, unable to defend themselves were rounded up and exterminated

Cambodia established gun control in 1956. From 1975 to 1977, one million educated people, unable to defend themselves, were rounded up and exterminated.

Defenceless people rounded up and exterminated in the 20th Century because of gun control: 56 million.

You won’t see this data on the US evening news, or hear politicians disseminating this information.

Guns in the hands of honest citizens save lives and property and, yes, gun-control laws adversely affect only the law-abiding citizens.

Take note my fellow Americans, before it’s too late!

The next time someone talks in favour of gun control, please remind them of this history lesson.

With guns, we are ‘citizens’. Without them, we are ‘subjects’.

During WWII the Japanese decided not to invade America because they knew most Americans were ARMED!

If you value your freedom, please spread this anti-gun-control message to all of your friends.

SWITZERLAND ISSUES EVERY HOUSEHOLD A GUN!

SWITZERLAND’S GOVERNMENT TRAINS EVERY ADULT THEY ISSUE A RIFLE.

SWITZERLAND HAS THE LOWEST GUN RELATED CRIME RATE OF ANY CIVILIZED COUNTRY IN THE WORLD!!!

DON’T LET OUR GOVERNMENT WASTE MILLIONS OF OUR TAX DOLLARS IN AN EFFORT TO MAKE ALL LAW ABIDING CITIZENS AN EASY TARGET.

Spread the word everywhere you can that you are a firm believer in the 2nd Amendment!

Back to the Future: What History Teaches About Gun Confiscations

It is clear that Obama, Boxer, a host of other elected representatives, the media, and Hollywood stars are coming after our guns. Leading the media charge is none other than Michael Moore; he implores the nation to let the murders of 20 Sandy Hook elementary students not “be in vain and stand for gun control.” Moore seems to forget that he and his family have several armed bodyguards.

Then there is Obama who refuses to mandate that gun free zones at schools be replaced with armed guards designed in order to protect our children. And Obama also seems to forget to mention that he has 11 armed guards protecting his children while they attend school in a “gun free zone.”

Regrettably, I believe that we are going to see an incrementally based approach to seizing our guns on the part of the Obama administration. Subsequently, Americans could very well be on the verge of committing “National Suicide by Gun Control”.

The gun control advocates are positioning themselves and their gun-grabbing policies to be perfectly timed to influence people during this window of opportunity motivated by the highly suspicious set of mass shootings (e.g. Batman shootings, Sandy Hook shootings)
All totalitarian governments begin their invasion into civil liberties with the promise of safety from whoever plays the convenient role of the “bogeyman” of the day. In Nazi Germany, the original bogeymen were the communists, and then this specter of bogeymen kept expanding until anyone who was an enemy of the State needed to be controlled and disarmed. Isn’t this what we have witnessed since the days of 9/11 with the creation of the DHS-inspired MIAC report which lists returning veterans, gun owners, Libertarians, Ron Paul supporters and Constitutionalists as domestic terrorists. This is your list of people who will be disarmed first, and the list will keep growing until all Americans are disarmed. The totalitarian pleas of “Let us protect you from yourself” ring loudly and clearly through the halls of Congress and in the Oval Office. History shows that when governments demand to protect you from yourself, we should all get a little bit nervous.

History shows that bad things, very bad things, happen when a government confiscates the guns of its citizens. It is an undisputed fact that gun control and gun confiscation have preceded every instance of genocide in the 20th century. How quickly we forget the lessons of history, or, perhaps we never bothered to learn the true lessons of history in the first place.

If we ever allow government to subvert the Second Amendment, we very well could be witnessing a prelude to an American genocide for specific targeted groups, for there is nothing as dangerous to a totalitarian regime as an educated and well-armed populace. Totalitarian regimes flourish in an atmosphere of ignorance. The dumbing down of American students has removed the first obstacle which could stand in the way of the establishment of a brutal police state control grid. The second obstacle, the removal of America’s citizens guns as a last line of defense against tyrannical government has commenced with the catalyst being the Sandy Hook shootings.

And let’s not forget that this criminal Obama administration has been caught shipping guns into Mexico to the drug cartels in order to undermine the Second Amendment; and we are supposed to trust these proven criminals to be the only ones who will have guns in the new UN-controlled America?

What Happens After Gun Confiscation?

Before we passively allow the Obama administration to strip away our last line of defense from an increasingly totalitarian government, by acquiescing to the United Nations and American advocates for gun control, perhaps we should examine the end game resulting from past gun control efforts:

1. In 1911, Turkey established gun control. From 1915-1917, 1.5 million Armenians, unable to defend themselves against their ethnic-cleansing government, were arrested and exterminated.

2. In 1929, the former Soviet Union established gun control as a means of controlling the “more difficult” of their citizens. From 1929 to the death of Stalin, 40 million Soviets met an untimely end at the hand of various governmental agencies as they were arrested and exterminated.

3. After the rise of the Nazis, Germany established their version of gun control in 1938 and from 1939 to 1945, 13 million Jews, gypsies, homosexuals, the mentally ill, and others, who were unable to defend themselves against the “Brown Shirts”, were arrested and exterminated. Interestingly, the Brown Shirts were eventually targeted for extermination themselves following their blind acts of allegiance to Hitler. Any American military and police would be wise to grasp the historical significance of the Brown Shirts’ fate.

4. After Communist China established gun control in 1935, an estimated 50 million political dissidents, unable to defend themselves against their fascist leaders, were arrested and exterminated.

5. Closer to home, Guatemala established gun control in 1964. From 1964 to 1981, 100,000 Mayans, unable to defend themselves against their ruthless dictatorship, were arrested and exterminated.

6. Uganda established gun control in 1970. From 1971 to 1979, 300,000 Christians, unable to defend themselves from their dictatorial government, were arrested and exterminated.

7. Cambodia established gun control in 1956. From 1975 to 1977, one million of the “educated” people, unable to defend themselves against their fascist government, were arrested and exterminated.

8. In 1994, Rwanda disarmed the Tutsi people and being unable to defend themselves from their totalitarian government, nearly one million were summarily executed.

The total numbers of victims who lost their lives because of gun control is approximately 70 million people in the 20th century. The historical voices from 70 million corpses speak loudly and clearly to those Americans who are advocating for a de facto gun ban. Governments murdered four times as many civilians as were killed in all the international and domestic wars combined. Governments murdered millions more people than were killed by common criminals and it all followed gun control.

2. All Germans desiring to purchase firearms had to register with the Nazi officials and submit to a background check.

3. The law assumed that non-Nazi German citizens were hostile and thereby exempted Nazis from the gun control law.

4. The Nazis assumed unrestricted power to decide what kinds of firearms could, or could not, be owned by private persons.

5. The types of ammunition that were legal were subject to control by governmental bureaucrats.

6. Citizens under 18 years of age could not buy firearms and ammunition.

2. Exempted government agencies from the controls which applied to law-abiding citizens.

3. Age restrictions of 18 years and 21 years were applied to anyone who wished to purchase firearms and ammunition.

4. Authorized the Secretary of the Treasury to decide what firearms could or could not be owned by private persons.

5.The types of ammunition that were legal were subject to control by governmental bureaucrats.

6. Age restriction of 18 years and 21 years were applied to anyone who wished to purchase firearms and ammunition.

Thomas Jefferson was very clear in his writings regarding the right to bear arms. Jefferson knew that the preservation of the Republic ultimately rested upon a well-armed citizenry. Jefferson felt it was absolutely necessary for American citizens to be able to protect themselves. The protection that Jefferson spoke of was not from our obvious enemies of the day (France and Britain), but from our own government. Jefferson made this point quite clear when he admonished future generations of Americans to fulfill their duty to overthrow a government if they failed to serve the needs of the majority of its citizens.

Private ownership of guns is the necessary component needed to fulfill the Jeffersonian mandate for national self-defense. Yet, increasingly reminiscent of Nazi Germany, the United States government is incrementally chipping away at private citizens’ right to own a gun. This does doesn’t make sense because FBI statistics clearly show that 90% of the guns used in the commission of a crime are stolen! Does the government really believe that criminals, both American citizens and illegal aliens, as well as terrorists, are suddenly going to perform their civic duty and immediately register their guns? How is America better-served if the only ones who don’t have access to guns are the law-abiding citizens? So, one must ask who are the gun control laws designed to protect and why?

Is this the government that you are going to accept? Even the most brainwashed of Americans cannot deny what you just watched on the preceding video. If we allow Obama to possess the ability to ban our guns, this is what you will likely see across the country; and the potential for this to spread into a flashpoint for widespread violence, and even revolution, should be concerning to all of us. This issue, in my humble opinion, needs to be our line in the sand against this tyrannical government.

Historians generally agree that there are eight identifiable stages associated with an unfolding genocide. It would behoove all Americans to familiarize themselves with these stages in order to accurately assess the developing threat should gun confiscation ever become a reality. An analysis of the applicability of the eight stages of genocide to present day America will be the focus of the next part in this series.