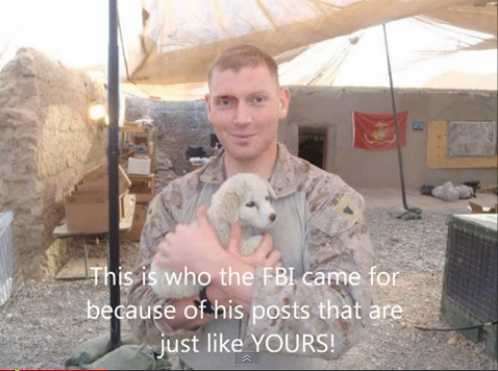 The Police, FBI and Secret Service swarmed in and took Brandon Raub to John Randolph Metal Hospital.   This patriotic Marine had posted 5 posts on the Dont-Tread-On.Me blog linked below.  Just glancing over them they seem to be of the religious and patriotic fight for truth and justice.  He used the blog to have people join his FaceBook group and even did and promoted a Richmond Liberty March.

I looked through my email to see if there was any emails between the two of us and I did not find any, although I am sure there was as I would not have given him access to post on the blog if I did not.

There are a couple of lessons I want everyone to know form what little information we have from this incident.

1. Delete Facebook. I did a video for The Greatest Truth Never Told series called Delete Facebook giving a non conspiracy reason why people should quit FaceBook as it is destroying our lives. Now you should all see the conspiracy reason why you should Delete Facebook.  This incident proves that it is just a huge monitoring tool for the Elite to track and build a profile of you.  You give willingly the details of your political leaning, friends, interests.  The hidden influence of the CIA  through In-Q-Tel is becoming more and more visible.

2. This is designed to create a chilling effect to people speaking out and more importantly to keep sheeple from look at us for the Truth.  I stated in the 3 Coming False Flags that the Elite would eventually criminalize or restrict our freedom of speech of the Freedom Movement.  The Elite know the economic collapse is going to bring about the Anger Phase of the Awakening.  They are actively preparing for riots and civil war. The thing that I find amazing is that these .gov people don’t ask why they are preparing for Civil War?  What could make people so mad to want to go to war?  Well since the Elite know the collapse of the dollar is coming they are conditioning their minions for that collapse.  What these people should realize is that their paychecks are going to bounce and their entire life’ savings are going to be robbed.

3. Non violent, non compliance is a smart and effective strategy.  Walking away from the paradigm is the best way of resisting the paradigm.  Anyone physically pushing back will be taken down as it is of the same consciousness of those that are spreading debt and death throughout the world.   Go peacefully if you are arrested, but question them on why and for what reason.  You ask the questions and you should give no answers.  You still have the right to keep quiet and ask for a lawyer.  Unless you are really good under pressure I would suggest you just say nothing accept for asking for your lawyer.  Also family members need to shut their mouths too as they immediately go after their friends and family in phone interviews.

4. Video tape everything you can.  If you are confronted record every aspect not only to protect yourself, your rights and keep the story straight but also for a future law suit. You have every right to record every confrontation, I would be discreet about it because you don’t want an officer break the law and take your evidence.  This is also very important to help keep your narrative straight as you will be told a lot of lies along the way.

5. Apparently questioning the government is a mental condition.  Brandon was immediately brought to John Randolph Mental Hospital.  The use of psychology was very common to political tool the Soviets and the Nazis to silence political opposition.  Look at what Vladimir Putin is doing in Russia.

6. You get more flak the closer you get to the target. We must be coming very close to the collapse date with all of the things that are going on.  I recommend that people stock up on food and gear and get ready to ride out the storm.

I hope to get more details as they develop and eventually I hope to thoroughly de-brief  Brandon as soon as he can.

Join the Insider mailing list at the top right hand side of the blog for email updates.

Here are the 5 articles from Brandon Raub on the Dont-Tread-On.Me site.

Property, Liberty, Jesus, and Our Country

What God Tried To Do