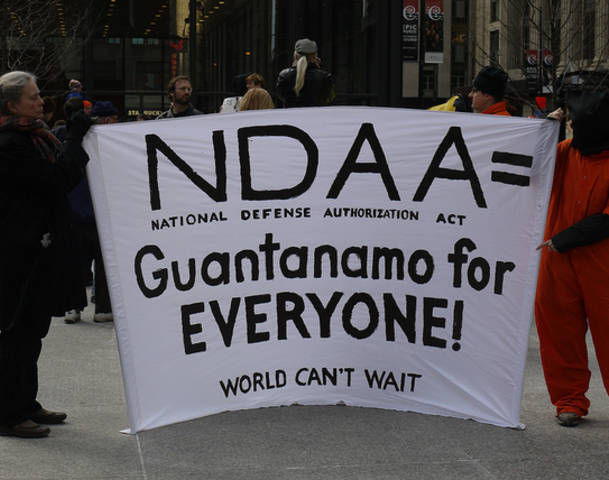 The Obama administration is battling to restore a controversial provision of a new federal law that it admits could have been used to arrest and detain citizens indefinitely – even if their actions were protected by the First Amendment.

A federal judge this week made permanent an injunction against enforcement of Section 1021 of the most recent National Defense Authorization Act, which was declared unconstitutional.

The Obama administration then took only hours to file an appeal of the order from U.S. District Judge Katherine Forrest, and attorneys also asked her to halt enforcement of her order.

In her order, Forrest wrote, “The government put forth the qualified position that plaintiffs’ particular activities, as described at the hearing, if described accurately, if they were independent, and without more, would not subject plaintiffs to military detention under Section 1021.”

But she continued, “The government did not – and does not – generally agree or anywhere argue that activities protected by the First Amendment could not subject an individual to indefinite military detention under Section 1021.”

The case was brought last January by a number of writers and reporters, led by New York Times reporter Christopher Hedges. The journalists contend the controversial section allows for detention of citizens and residents taken into custody in the U.S. on “suspicion of providing substantial support” to anyone engaged in hostilities against the U.S.

The lawsuit alleges the law is vague and could be read to authorize the arrest and detention of people whose speech or associations are protected by the First Amendment. They wonder whether interviewing a member of al-Qaida would be considered “substantial support.”

“Here, the stakes get no higher: indefinite military detention – potential detention during a war on terrorism that is not expected to end in the foreseeable future, if ever. The Constitution requires specificity – and that specificity is absent from Section 1021,” the judge wrote.

Dan Johnson, a spokesman with People Against the NDAA, told WND it took only hours for the government to file an appeal to the 2nd Circuit Court of Appeals.

“It most definitely tells us something about their intent,” he told WND.

He cited Obama’s signing statement, when the bill was made law, that he would not use the provision allowing detention of American citizens without probable cause in military facilities.

“Just because someone says something doesn’t mean they’re not lying,” he said.

Bloomberg reports the Obama administration also is asking Forrest for a stay of the ruling that found the law violates the First, Fifth and 14th Amendments.

The judge expressed dissatisfaction with what one observer described as the arrogance of the Department of Justice in the case.

Forrest asked the government to define the legal term, noting the importance of how they apply to reporting and other duties.

“The court repeatedly asked the government whether those particular past activities could subject plaintiffs to indefinite military detention; the government refused to answer,” she wrote.

“The Constitution places affirmative limits on the power of the executive to act, and these limits apply in times of peace as well as times of war,” she wrote.

She said the law “impermissibly impinges on guaranteed First Amendment rights and lacks sufficient definitional structure and protection to meet the requirements of due process.”

“This court rejects the government’s suggestion that American citizens can be placed in military detention indefinitely, for acts they could not predict might subject them to detention, and have as their sole remedy a habeas petition adjudicated by a single decision-maker (a judge versus a jury), by a ‘preponderance of the evidence’ standard,” she wrote.

“That scenario dispenses with a number of guaranteed rights,” she said.

The Obama administration already has described those who hold a pro-life position or support third-party presidential candidates or the Second Amendment fit the profile of a domestic terrorist.

Obama stated when he put his signature to the legislative plan that his administration “will not authorize the indefinite military detention without trial of American citizens.”

Virginia already has passed a law that states it would not cooperate with such detentions, and several local jurisdictions have done the same. Arizona, Rhode Island, Maryland, Oklahoma, Tennessee and Washington also have considered similar legislation.

The case was brought on behalf of Christopher Hedges, Daniel Ellsberg, Jennifer Bolen, Noam Chomsky, Alex O’Brien, Kai Warg All, Brigitta Jonsottir and the group U.S. Day of Rage. Many of the plaintiffs are authors or reporters who stated that the threat of indefinite detention by the U.S. military already had altered their activities.

Constitutional expert Herb Titus filed a friend-of-the-court brief on behalf of the sponsor of the Virginia law, Delegate Bob Marshall and others.

The impact is that “the statute does not have sufficient constitutional guidelines to govern the discretion of the president in making a decision whether to hold someone in indefinite military detention,” Titus said.

The judge had noted that the law doesn’t have a requirement that there be any knowledge that an act is prohibited before a detention. The judge also said the law is vague, and she appeared to be disturbed that the administration lawyers refused to answer her questions.

Titus said the judge’s conclusions underscore “the arrogance of the current regime, in that they will not answer questions that they ought to answer to a judge because they don’t think they have to.”

The brief was filed on behalf of Marshall and other individuals and organizations, including the United States Justice Foundation, Downsize DC Foundation, Institute on the Constitution, Gun Owners of America, Western Center for Journalism, the Tenth Amendment Center and Pastor Chuck Baldwin.

Marshall’s HB1160 passed the Virginia House of Delegates by a vote of 87-7 and the Virginia Senate 36-1. Since the vote was on changes recommended by Gov. Bob McDonnell, it was scheduled to take effect without further vote.

Marshall then wrote leaders in state legislatures around the country suggesting similar votes in their states.

Marshall’s letter noted Virginia was the first state in the nation to refuse cooperation “with federal authorities who, acting under the authority of section 1021 of the National Defense Authorization Act of 2012 (NDAA), could arrest and detain American citizens suspected of aiding terrorists without probable cause, without the right to know the charges against them, and without the procedural rights guaranteed by the Bill of Rights.”

He told lawmakers, “While we would hope that the U.S. Senate and U.S. House of Representatives would be vigilant to protect the constitutional rights of American citizens, even when addressing the problem of international terrorism, those efforts in Congress failed at the end of last year, and President Obama signed NDAA into law on December 31, 2011.”

Endorsing Marshall’s plan was the Japanese American Citizens League, which cited the detention of tens of thousands of Japanese Americans during World War II on no authorization other than the president’s signature.

The Obama administration continues to argue the law allows for detention without legal due process only those who “substantially supported” terror groups such as al-Qaida or “associated forces.” But the plaintiffs note that the law does not define those terms.

Instead, they point to the law’s provision that such individuals may be detained “without trial until the end of the hostilities.”

Obama attorneys said the new law simply affirms what already was precedent under the Authorization for Use of Military Force, which was adopted in the dust of the 9/11 terror attacks.

But plaintiffs wrote, “Nowhere does the AUMF convey to the executive the power to detain any person – citizen or otherwise – who ‘substantially supported’ al-Qaida or the Taliban or their associate forces, as section 1021 of the NDAA now provides.”