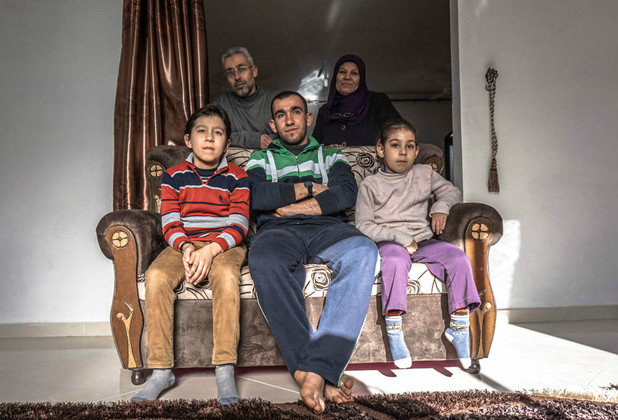 Israel’s “Smart” Weapons Kill Sabah Abu Jayab, known to her family and friends as Um Ahmad, walked through her home pointing out everything that had to be replaced after Israel’s 2014 assault on the besieged Gaza Strip.

“This is all new,” Um Ahmad, a pharmacist, told The Electronic Intifada. She motioned to a balcony equipped with freshly painted walls and new windowsills. Moving to the living room, she said: “These couches, the chairs over there — all of it is new. We had to replace everything.”

Her home, where she lived with her husband and eight children, was hit by four missiles fired by an Israeli drone during the first week of the Israeli attack. “Only two of them exploded,” she said. “If the others had blown up, we’d have all died.”

Not everyone survived. Her eighteen-year-old daughter Amal, who was disabled and unable to walk, died on 17 July, four days after their house was struck.

“She wasn’t hit by the rocket or debris,” Um Ahmad explained, “but she inhaled a lot of smoke and dust.”

Amal was one of an estimated 2,257 Palestinians killed — including 563 children and 306 women — during Israel’s seven-week attack, according to the United Nations monitoring group OCHA.

“They were all scared”

On 13 July, as missiles pounded their neighbors’ homes during an intensified attack on the Deir al-Balah area in central Gaza, Um Ahmad moved all the children into one room in the back of their house.

“It was hard to explain to them what was happening and they were all scared,” she said, explaining that Amal’s three sisters are also disabled and unable to walk due to genetic birth defects.

“There had been no electricity or water for days, and the little ones would jump every time they heard an explosion,” she said.

Um Ahmad explained that they tried to stay in their home because they had nowhere else to go. “It was hard on the little ones,” she said. “We knew at any minute we could be hit [by an Israeli strike] like our neighbors.”

Muhammad Abu Jayab, 11, stands on the roof of his home. His neighbor’s destroyed house is in the background.

Um Ahmad had to go to her pharmacy to provide medicine for local residents with chronic illnesses and others who had been injured by Israel’s assault. “There was no way I could not show up to work,” she explained. “People with diabetes needed insulin even during times of war [and] others who were hurt needed antibiotics and other medicine.”

The Abu Jayab family home was hit on 13 July. “We had to carry the four children who don’t walk,” she said. “We took Amal to the hospital because she was in shock and having trouble breathing. They put her on oxygen, but her vital signs seemed fine and she didn’t have any external bodily injuries.” Israel’s “Smart” Weapons Kill

Amal was unable to eat or speak after the attack and Um Ahmad spent the last four days of her daughter’s life going back and forth between the hospital and the pharmacy where she works. “I showed up that last day and she was dead,” she recounted as she fought back tears.

Israel targeted a medical facility for the disabled on 12 July, the day before the Abu Jayab home was struck. At least four persons were killed and dozens injured when bombs crushed the Mabaret Palestine Society, a center for people with disabilities, in Beit Lahiya, a town in northern Gaza.

Israel bombed the al-Wafa hospital in the Shujaiya neighborhood of Gaza Citytwo days later, on 23 July.

Doctors were forced to evacuate at least fourteen patients who were paralyzed or in a coma at the time, Ma’an News Agency reported.

The Israeli army claimed that Palestinian armed groups used the hospital as a base. However it was revealed that Israel used fabricated satellite imagesto “justify” its bombing of al-Wafa.

Ashraf al-Qidra, a spokesperson for Gaza’s health ministry, said that Israel targeted medical facilities and health workers alike. In addition to the hospitals and clinics, three dozen ambulances were destroyed, he told The Electronic Intifada.

“Israel turned medical centers into unprotected zones, although they are supposed to be protected by international law,” al-Qidra said. “Patients and workers had to always worry whether Israel would target the buildings they were in.”

Al-Qidra added that the medical centers were destroyed or damaged by warplanes, drone strikes and tank shelling alike.

Back in her home, Um Ahmad said, “What are we supposed to do now? We just want to live like everyone else. We need food, water and electricity — and we need to keep our children safe. We cannot do that here.”