How Smart Is This Bird? Let It Count the Ways 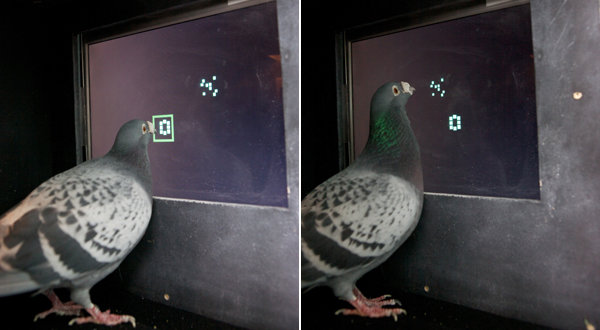 A pigeon performing a math test. When the bird pecks a shape, a box appears around it.

By now, the intelligence of birds is well known. Alex the African gray parrot had great verbal skills. Scrub jays, which hide caches of seeds and other food, have remarkable memories. And New Caledonian crows make and use tools in ways that would put the average home plumber to shame. 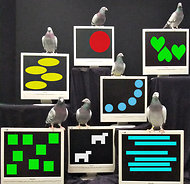 The birds learned to rank shapes (the ones on the screens are simulated).

Pigeons, it turns out, are no slouches either. It was known that they could count. But all sorts of animals, including bees, can count. Pigeons have now shown that they can learn abstract rules about numbers, an ability that until now had been demonstrated only in primates. In the 1990s scientists trained rhesus monkeys to look at groups of items on a screen and to rank them from the lowest number of items to the highest.

They learned to rank groups of one, two and three items in various sizes and shapes. When tested, they were able to do the task even when unfamiliar numbers of things were introduced. In other words, having learned that two was more than one and three more than two, they could also figure out that five was more than two, or eight more than six.

Damian Scarf, a postdoctoral fellow at the University of Otago, in New Zealand, tried the same experiment with pigeons, and he and two colleagues report in the current issue of the journal Science that the pigeons did just as well as the monkeys.

Elizabeth Brannon, a professor of psychology and neuroscience at Duke University, and one of the scientists who did the original experiments with monkeys, was impressed by the new results. “Their performance looks just like the monkeys’,” she said.

Score one for the birds. The pigeons had learned an abstract rule: peck images on a screen in order, lower numbers to higher. It may have taken a year of training, with different shapes, sizes and colors of items, always in groups of one, two or three, but all that work paid off when it was time for higher math.

Given groups of six and nine, they could pick, or peck, the images in the right order. This is one more bit of evidence of how smart birds really are, and it is intriguing because the pigeons’ performance was so similar to the monkeys’. “I was surprised,” Dr. Scarf said.

He and his colleagues wrote that the common ability to learn rules about numbers is an example either of different groups — birds and primates, in this case — evolving these abilities separately, or of both pigeons and primates using an ability that was already present in their last common ancestor.

That would really be something, because the common ancestor of pigeons and primates would have been alive around 300 million years ago, before dinosaurs and mammals. It may be that counting was already important, but Dr. Scarf said that if he had to guess, he would lean toward the idea that the numerical ability he tested evolved separately. “I can definitely see why both monkeys and pigeons could profit from this ability,” he said.

No testing has been done with numbers greater than nine, so whether a pigeon can count large numbers of bread crumbs or popcorn kernels is a question still open to investigation.