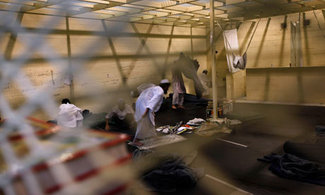 In a five-four ruling this week, the supreme court decided that anyone can be strip-searched upon arrest for any offense, however minor, at any time. This horror show ruling joins two recent horror show laws: the NDAA, which lets anyone be arrested forever at any time, and HR 347, the “trespass bill”, which gives you a 10-year sentence for protesting anywhere near someone with secret service protection. These criminalizations of being human follow, of course, the mini-uprising of the Occupy movement.

Bagram airbase was used by the US to detain its ‘high-value’ targets during the ‘war on terror’ and is still Afghanistan’s main military prison. Photograph: Dar Yasin/AP

Is American strip-searching benign? The man who had brought the initial suit, Albert Florence, described having been told to “turn around. Squat and cough. Spread your cheeks.” He said he felt humiliated: “It made me feel like less of a man.”

In surreal reasoning, justice Anthony Kennedy explained that this ruling is necessary because the 9/11 bomber could have been stopped for speeding. How would strip searching him have prevented the attack? Did justice Kennedy imagine that plans to blow up the twin towers had been concealed in a body cavity? In still more bizarre non-logic, his and the other justices’ decision rests on concerns about weapons and contraband in prison systems. But people under arrest – that is, who are not yet convicted – haven’t been introduced into a prison population.

Our surveillance state shown considerable determination to intrude on citizens sexually. There’s the sexual abuse of prisoners at Bagram – der Spiegel reports that “former inmates report incidents of … various forms of sexual humiliation. In some cases, an interrogator would place his penis along the face of the detainee while he was being questioned. Other inmates were raped with sticks or threatened with anal sex”. There was the stripping of Bradley Manning is solitary confinement. And there’s the policy set up after the story of the “underwear bomber” to grope US travelers genitally or else force them to go through a machine – made by a company, Rapiscan, owned by terror profiteer and former DHA czar Michael Chertoff – with images so vivid that it has been called the “pornoscanner”.

Believe me: you don’t want the state having the power to strip your clothes off. History shows that the use of forced nudity by a state that is descending into fascism is powerfully effective in controlling and subduing populations.

The political use of forced nudity by anti-democratic regimes is long established. Forcing people to undress is the first step in breaking down their sense of individuality and dignity and reinforcing their powerlessness. Enslaved women were sold naked on the blocks in the American south, and adolescent male slaves served young white ladies at table in the south, while they themselves were naked: their invisible humiliation was a trope for their emasculation. Jewish prisoners herded into concentration camps were stripped of clothing and photographed naked, as iconic images of that Holocaust reiterated.

One of the most terrifying moments for me when I visited Guantanamo prison in 2009 was seeing the way the architecture of the building positioned glass-fronted shower cubicles facing intentionally right into the central atrium – where young female guards stood watch over the forced nakedness of Muslim prisoners, who had no way to conceal themselves. Laws and rulings such as this are clearly designed to bring the conditions of Guantanamo, and abusive detention, home.

I have watched male police and TSA members standing by side by side salaciously observing women as they have been “patted down” in airports. I have experienced the weirdly phrased, sexually perverse intrusiveness of the state during an airport “pat-down”, which is always phrased in the words of a steamy paperback (“do you have any sensitive areas? … I will use the back of my hands under your breasts …”). One of my Facebook commentators suggested, I think plausibly, that more women are about to be found liable for arrest for petty reasons (scarily enough, the TSA is advertising for more female officers).

The most terrifying phrase of all in the decision is justice Kennedy’s striking use of the term “detainees” for “United States citizens under arrest”. Some members of Occupy who were arrested in Los Angeles also reported having been referred to by police as such. Justice Kennedy’s new use of what looks like a deliberate activation of that phrase is illuminating.

Ten years of association have given “detainee” the synonymous meaning in America as those to whom no rights apply – especially in prison. It has been long in use in America, habituating us to link it with a condition in which random Muslims far away may be stripped by the American state of any rights. Now the term – with its associations of “those to whom anything may be done” – is being deployed systematically in the direction of … any old American citizen.

Where are we headed? Why? These recent laws criminalizing protest, and giving local police – who, recall, are now infused with DHS money, military hardware and personnel – powers to terrify and traumatise people who have not gone through due process or trial, are being set up to work in concert with a see-all-all-the-time surveillance state. A facility is being set up in Utah by the NSA to monitor everything all the time: James Bamford wrote in Wired magazine that the new facility in Bluffdale, Utah, is being built, where the NSA will look at billions of emails, texts and phone calls. Similar legislation is being pushed forward in the UK.

With that Big Brother eye in place, working alongside these strip-search laws, – between the all-seeing data-mining technology and the terrifying police powers to sexually abuse and humiliate you at will – no one will need a formal coup to have a cowed and compliant citizenry. If you say anything controversial online or on the phone, will you face arrest and sexual humiliation?

Remember, you don’t need to have done anything wrong to be arrested in America any longer. You can be arrested for walking your dog without a leash. The man who was forced to spread his buttocks was stopped for a driving infraction. I was told by an NYPD sergeant that “safety” issues allow the NYPD to make arrests at will. So nothing prevents thousands of Occupy protesters – if there will be any left after these laws start to bite – from being rounded up and stripped naked under intimidating conditions.

Why is this happening? I used to think the push was just led by those who profited from endless war and surveillance – but now I see the struggle as larger. As one internet advocate said to me: “There is a race against time: they realise the internet is a tool of empowerment that will work against their interests, and they need to race to turn it into a tool of control.”

As Chris Hedges wrote in his riveting account of the NDAA: “There are now 1,271 government agencies and 1,931 private companies that work on programs related to counterterrorism, homeland security and intelligence in about 10,000 locations across the United States, the Washington Post reported in a 2010 series by Dana Priest and William M Arken. There are 854,000 people with top-secret security clearances, the reporters wrote, and in Washington, DC, and the surrounding area 33 building complexes for top-secret intelligence work are under construction or have been built since September 2011.”

This enormous new sector of the economy has a multi-billion-dollar vested interest in setting up a system to surveil, physically intimidate and prey upon the rest of American society.

Now they can do so by threatening to demean you sexually – a potent tool in the hands of any bully.

LOBBYING: Closer to Bribery, or Extortion?