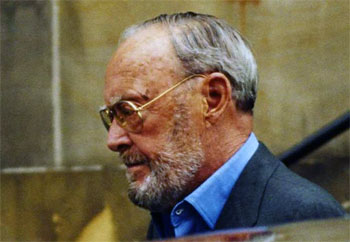 Jack, I work for Alex Jones. Please allow me to state for the record I believe your Bilderberg article is bunk. Of course the corporate media, on occasion, reports the comings and goings and when they can — dare I say, when they are permitted — the grist of Bilderberg meetings. You miss the point. It is not so much that there is a partial blackout surrounding these events, but rather what is discussed at the meetings is rarely if ever reported. Adam Smith wrote back in the day, “People of the same trade seldom meet together, even for merriment and diversion, but the conversation ends in a conspiracy against the public.” Same applies to the Bilderbergers. But then I imagine you likely consider this in the province of tinfoil hat stuff, especially considering who writes your paycheck.

May I suggest you plunk an addendum on your article after you read Daniel Estulin’s The True Story of the Bilderberg Group? After reading this book, you may actually feel a tinge of embarrassment over the naivety of your article. In this book, Mr. Estulin names plenty of corporate media people who attend this annual confab. No wonder so few corporate media outlets report seriously on Bilderberg, including Slate, owned by the Washington Post. But then the naivety may be on my side, as corporate media writers have a tendency not to experience embarrassment, let alone shame. But then maybe I am a bit too judgmental.

Not sure if you know, but your boss, Donald E. Graham, was on the Bilderberg participation list this year. Now that fact sheds a bit of light on your article. As well, a representative of Microsoft, the multinational corporation that created Slate, was at the meeting. No sense biting that hand that feeds, I suppose.

Finally, I find your article insulting due to the fact Alex Jones and his media team were harassed and threatened while attempting to cover the Bilderberg confab in Chantilly. His wife received a threatening telephone call. I wonder how many effete Washington Post writers would have put up with that for more than five minutes, let alone three days. Dare I say none?

Thanks for your note.

I included Don Graham’s name of those have attended Bilderberg in my article and am aware that many journalists have attended the conference. Sorry to hear that the Jones team was harassed and his wife received a threatening phone call. That is inexcusable.

All that said, what evidence do we have that the Bilderberg conference is nefarious? Do you take the Logan Act accusations seriously?

Jack, I do take the Logan Act violations seriously. Logan specifically addresses the Constitution, Article. II, Section 2, that states the President “shall have Power, by and with the Advice and Consent of the Senate, to make Treaties, provided two thirds of the Senators present concur.” The Logan Act expands on this by stating that any citizen of the United States “who, without authority of the United States, directly or indirectly commences or carries on any correspondence or intercourse with any foreign government or any officer or agent thereof, with intent to influence the measures or conduct of any foreign government or of any officer or agent thereof, in relation to any disputes or controversies with the United States, or to defeat the measures of the United States, shall be fined under this title or imprisoned not more than three years, or both.”

All Americans in attendance this past week at the Bilderberg conference in Chantilly, Virginia, are in violation of the Logan Act.

I’d have to say those who believe kings, queens, princes, chancellors, prime ministers, presidents, ambassadors, secretaries of state, Wall Street investors, international bankers, news media executives, CEOs of transnational corporations, et al, get together annually to simply and idly engage in informal discussion without seeking to “reach a consensus on the big issues,” as Bilderberg founder and former British Chancellor of the Exchequer Denis Healey once put it, are naive in extremis. Of course the members of Bilderberg wish to reach a consensus. And what is that consensus? Nothing less than the establishment of a world government.

Again, may I suggest you read Daniel Estulin’s The True Story of the Bilderberg Club? This book was named Non-fiction Book of the Year in Canada by the The Kingston Eye Opener and became an international bestseller. It details who the Bilderbergers are and their global agenda.

Bilderberg founder Prince Bernhard of The Netherlands, a former member of the Nazi SS, has said: “It is difficult to re-educate people who have been brought up on nationalism to the idea of relinquishing part of their sovereignty to a supranational body.” Bernhard’s daughter, Queen Beatrix, now carries this message and mission to Bilderberg meetings.

Denis Healey, mentioned above, has said: “World events do not occur by accident. They are made to happen, whether it is to do with national issues or commerce; and most of them are staged and managed by those who hold the purse strings.”

David Rockefeller, a consistent member of the Bilderberg steering committee and unabashed globalist, wrote in his memoir: “Some even believe we are a part of a secret cabal working against the best interests of the United States, characterizing my family and me as ‘internationalists’ and of conspiring with others around the world to build a more integrated global political and economic structure — one world, if you will. If that’s the charge, I stand guilty and I am proud of it.” Is it possible, when kings, sheiks and presidents visit Rockefeller at his vast family estate at Pocantico, they are engaged in idle chatter? Or are they discussing Rockefeller’s lifelong passion, the establishment of a world government?

On March 5, 2005, during a Bilderberg meeting at the isolated Dorint Sofitel Seehotel Ueberfahrt in Rottach-Egern in Germany, Rockefeller stated: “It would have been quite impossible for us to develop our plan for the world if we had been subjected to the lights of publicity during those years. But, the world is more sophisticated and prepared to march towards a world government. The supranational sovereignty of an intellectual elite and world bankers is surely preferable to the national autodetermination practiced in past centuries.”

British economist Will Hutton was spot on when he declared Bilderberg to be “the backdrop against which policy is made worldwide” and these policies are expected to be later implemented at G-8 meetings, and those of the International Monetary Fund and World Bank.

Asia Times journalist Pepe Escobar has noted: “Whenever corporate media approaches Bilderberg it mirrors the silence of the lambs.” It is a deafening silence over at the New York Times, the Baltimore Sun, the Chicago Tribune, and yes the Washington Post, your article notwithstanding.

In fact, I am a bit surprised Slate, a wholly owned subsidiary of the Washington Post, posted your article. But then the corporate media is boxed in a corner now that the Bilderberg confabs increasingly draw attention, never mind the former silence of corporate media lambs.

Finally, it is interesting your article, essentially a hit piece directed against Bilderberg critics, appeared at approximately the same time the Bilderberg press release and participant list appeared. Publishing the press release and the list is a first for the Bilderbergers. It is a defensive move, obviously designed to silence, however feebly, the critics. It will not work, however.

The official participant list reveals no shortage of Americans, from Fed boss Ben Bernanke to Secretary of State Condoleezza Rice. May I suggest this list be used to round up those in violation of the Logan Act? Of course, that would also include your boss, Donald E Graham, who has no right to discuss the future of U.S. sovereignty in private.