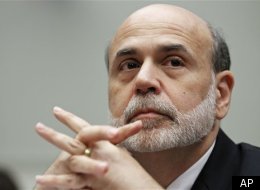 A newly-released study from the Congressional Research Service bolsters claims that the nation’s largest banks profited off the Federal Reserve’s financial crisis-era programs by borrowing cash for next to nothing, then lending it back to the federal government at substantially higher rates.

The report reinforces long-held beliefs that the banking system in essence engaged in taxpayer-financed arbitrage: They got money for free, then lent it back to Uncle Sam while collecting juicy returns. Left out of the equation are the millions of everyday borrowers, like households and small businesses, who were unable to secure loans needed to tide them over until the crisis ended.

The Fed released records under pressure in December and March that showed the extent of its largesse. The CRS study shows for the first time how some of the most sophisticated financial firms could have taken the Fed’s money and flipped easy profits simply by lending it back to another arm of the government.

The report was requested by Sen. Bernie Sanders (I-Vt.), who likened the crisis-era emergency loans to “direct corporate welfare to big banks,” in a statement. The cash likely was lent back to Uncle Sam in the form of Treasuries and other debt “instead of using the Fed loans to reinvest in the economy,” Sanders added.

In all, more than $3 trillion was lent to financial institutions from the Fed, and terms were generous. Junk-rated securities were pledged as collateral for taxpayer-backed loans. The Fed did not provide conditions for how the money was to be used.

As part of one Fed program, on 33 separate occasions, nine firms were able to borrow between $5.2 billion and $6.2 billion in U.S. government securities for four-week intervals, paying one-time fees that amounted to the minuscule rate of 0.0078 percent.

In another, financial firms pledged more than $1.3 trillion in junk-rated securities to the Fed for cheap overnight loans. The rates were as low as 0.5 percent.

During one three-month period in 2009, Bank of America borrowed more than $48 billion at rates ranging from 0.25 to 0.5 percent. Meanwhile, the largest U.S. lender tripled its holdings of Treasuries and other taxpayer-backed debt to about $15 billion — securities that yielded 3.5 percent.

During the third quarter of 2009, the bank borrowed $2.9 billion from the Fed through a program that charged 0.25 percent interest. In that same period, Bank of America increased its holdings of taxpayer-backed federal debt by $12 billion, according to the Congressional Research Service. Those securities yielded an average of 3.2 percent.

“Bank of America provided vital support to the economy throughout the financial crisis and we continue to support businesses and individuals today through our lending and capital raising activities,” spokesman Jerry Dubrowski said in an email.

In another period, JPMorgan Chase, the second-largest bank, swelled its holdings of taxpayer-backed federal debt by $20 billion, which yielded 2.1 percent, while at the same time borrowing $29 billion from the Fed at a rate of 0.3 percent.

JPMorgan did not respond to a request for comment.

In contrast, during the first year of the Obama administration, small businesses shuttered due to lackluster sales and a lack of credit, foreclosures surged, and credit contracted at one of the quickest rates on record.

“Why wasn’t the Fed providing these same sweetheart deals to the American people?” asked Warren Gunnels, senior policy adviser to Sanders. “The Fed was practicing socialism for the rich, powerful and the connected, while the federal government was promoting rugged individualism to everyone else.”

At the time, Fed officials said its bailout programs were necessary to restart the flow of credit. If money couldn’t flow to lenders, households and businesses would be next. Even more layoffs and foreclosures could have ensued, officials argued.

Sanders said the spread between firms’ borrowing rates and their lending rates to Uncle Sam amounted to “free money.” For Bank of America during the third quarter of 2009, the spread was nearly 3 percent.

Dubrowski countered by pointing out that Bank of America “extended $184 billion in credit to individuals and businesses” during that time.

The author of the CRS report, Marc Labonte, cautioned that “correlation does not prove causation.”

“There is no information available on how banks used specific funds borrowed from the Federal Reserve,” he wrote.